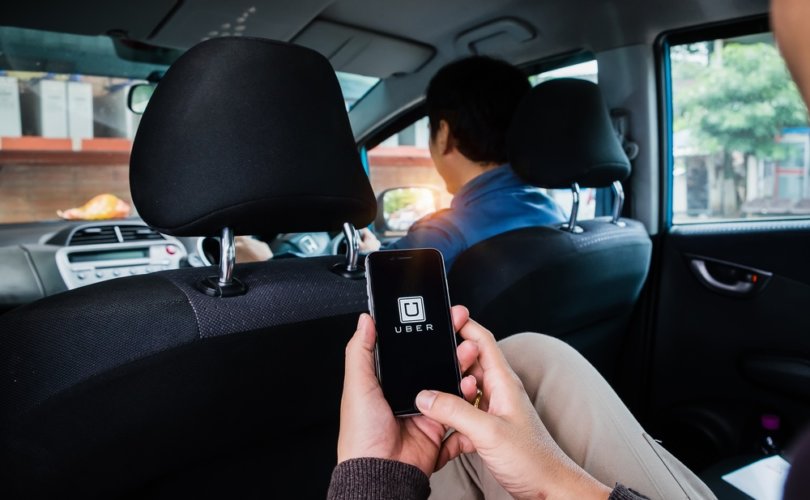 NEW YORK, April 24, 2019 (LifeSiteNews) — Uber has permanently banned a driver in upstate New York for refusing to take a 20-year-old college student to an abortion facility.

The incident went viral on mainstream media after the student wrote about the “worst, most backward day of my life” on Reddit.

Uber confirmed “that the driver was removed from the service as his actions violated the company’s community guidelines,” according to Yahoo Lifestyle.

Although the driver offered to take her back home, the student declined, and instead, after reaching her boyfriend, called a cab and went through with the abortion.

She now wants to sue the driver, and is seeking legal advice on Reddit.

While the story has stirred up controversy on social media with the Uber driver generally cast as a villain, Dr. Monica Migliorino Miller of Citizens for a Pro-Life Society says he did the right thing.

“Everyone has a duty to follow their correct conscience and not be coerced to act contrary to that conscience. Thus, in the case of the Uber driver who would not take the woman to an abortion clinic — he did exactly what was ethically required,” she told LifeSiteNews in an email.

“He refused to be a party to the murder of an innocent human being, and he had every right to refuse to transport the woman to a place where she would exterminate her child,” Miller said.

“No one can remain apathetic and aloof from how we may be co-opted to help facilitate the performance of an evil act.”

The student, who attends Cornell University in Ithaca, found out in March she was pregnant, Yahoo Lifestyle reported.

“I knew I was going to terminate the pregnancy immediately since I’m in no position to care for a child at this point in my life,” she wrote on Reddit.

Her boyfriend and parents, who live in North Carolina, and her best friend  “were all supportive of my decision.”

She booked a medical abortion in an abortion center an hour away because the Planned Parenthood near her university couldn’t fit her in for a week, she told Yahoo Lifestyle.

She also booked an Uber for the hour-long trip, but the driver “immediately seemed uncomfortable. After about five minutes in the car, he asked, ‘are we going to a planned parenthood?’ I said no (because we weren’t), but it set off alarm bells that he would even ask that,” she wrote.

The student said nothing, but the driver persevered.

“He then said ‘I know it’s none of my business, but…' and proceeded to mention something about his wife being pregnant, how awful the procedure was (and proceeded to explain it in graphic detail), and that ‘there is so much they don’t tell you’,” she wrote.

“He then said ‘you’re going to regret this decision for the rest of your life’ and that I was making a mistake.”

Halfway to the destination on Route 38, the driver pulled over.

“There was a gas station and a closed antiques store, and around us was farmland and forest. He said ‘I’m sorry, but I can’t take you the rest of the way. I can take you back to [my city], but you won’t be able to find another Uber out here,” she wrote.

The student wrote she got out of the car crying, called her parents three times, who didn’t pick up, and called her boyfriend, who immediately answered and told her to call a cab and then the abortion center, to let them know she’d be late.

The Uber driver “waited around for about 15 minutes, assuming I’d change my mind,” she wrote.

“I insisted I was fine and that he should go back and he eventually left. After waiting about 25 minutes, the cab showed up and I got to my appointment (an hour late).”

The student told Yahoo Lifestyle she had to pay $120 for the cab.

She comes from a “politically conservative family” so she understands “being pro-life” and that some people would disagree with her decision to abort her child, she wrote on Reddit.

“But your beliefs do not give you the right to make me feel uncomfortable when I’m completely vulnerable and am relying on you to perform a service I desperately need,” she wrote.

The “reason my parents or boyfriend couldn’t drive me is because they both live in North Carolina while I go to school in New York. My boyfriend couldn’t afford to buy a last minute flight to see me, and because I live in a dorm room with a roommate, there would have been no place for him to stay,” she wrote.

“My parents did manage to get a last minute flight, but they didn’t get one in time to take me to my appointment.”

Cheryl Sullenger of Operation Rescue says the story has gone viral in the mainstream media because it can be used “vilify pro-lifers,” with the Uber driver seen as heartless for pulling over half-way through the ride.

“It seems that as the ride progressed, he became more uncomfortable and didn’t want to be a participant in killing her baby through abortion,” she told LifeSiteNews.

“You can’t expect a person to violate his conscience,” Sullenger said.

Moreover, if the Uber driver was, as it appears, “the lone voice advocating for the life of this baby, that’s really kind of sad,” she added.

“Because that means that her family and her friends and her support system really let her down, because abortion is not the answer to anybody’s problems,” Sullenger said.

“It’s going to take the life of an innocent baby, and it’s going to cause repercussions in her life.”