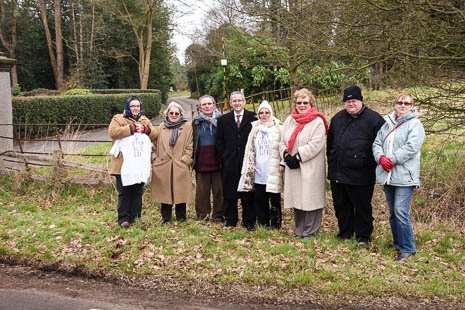 LEAMINGTON SPA, United Kingdom, May 3, 2016 (LifeSiteNews) — The abortion clinic operating just outside the small city of Leamington Spa in central England has suddenly and quietly closed, much to the satisfaction of the small band of 40 Days for Life volunteers who have held seven vigils outside.

But Colquhoun isn’t taking credit, admitting the reason for the shutdown is unclear—whether prayer, or a reduction in business because of the vigils, or a changing business model.

One of 30-plus abortion facilities operated by the British Pregnancy Advisory Service (BPAS) across the country, the clinic ceased operations March 31 without explanation. Like most British abortion clinics, it served women in the early stages of pregnancy by giving them abortion pills, leaving late-term surgery to public hospitals, according to Colquhoun.

“We have had a small but dedicated team out there, really out in the country, who kept praying, kept the faith,” Colquhoun told LifeSiteNews.

Isabel Vaughan-Spruce of the March for Life UK described in a blog going into the clinic undercover to sample its admission procedures. “Even a reasonably seasoned pro-lifer like myself was surprised at the lack of counselling or should I say ‘it its absence.’” She described a crowded waiting room dominated by a blaring TV. “I presumed this helped prevent women from having reflective thinking time.”

As far as she could tell, there was no post-op psychological care; the clients were simply sent outside for their rides. “There seemed to be a lot of women/girls just standing around or sitting on the ground looking empty and hopeless.”

Paul Tully of the Society for the Protection of Unborn Children notes a “serious decline” in the number of abortions in the U.K.—from 200,000 to 180,000 roughly. Meanwhile both BPAS and the country’s other abortion chain, Marie Stopes, are moving away from free-standing clinics to two-day-a-week operations out of spare rooms in existing general medical practices.

Whether because of 40 Days or a changing business model, Tully says, the closing of an abortion facility is a cause for celebration. “We very much welcome the peaceful and prayerful activities of 40 Days. Many SPUC supporters participate in the vigils.” Tully says he’s sure the vigils are having an impact because supporters of abortion access are quietly campaigning to have “buffer” zones established around all abortion facilities by law.