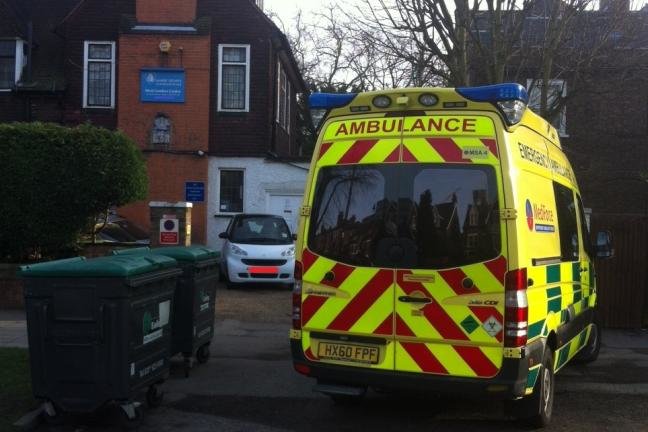 An ambulance outside an abortion clinic in London.

BPAS urged their supporters via their website yesterday to “ask your MP to support an amendment to the Domestic Abuse Bill to decriminalise abortion and protect pregnant women in abusive relationships.”

Abortion is permitted in England under exceptions to earlier laws that make it a criminal offence. The Abortion Act 1967 allows abortions up to 24 weeks, providing it is carried out by a registered doctor, that two doctors agree that the mother’s physical or mental health is at risk, or that the child will be seriously disabled.

Decriminalizing abortion means repealing sections 58 and 59 of the Offences Against the Person Act (1861), and the Infant Life Preservation Act (1929). As UK abortion regulations presume that abortion is a criminal offence, this would make the Abortion Act exceptions irrelevant and deregulate the industry. It would allow abortion-on-demand, in any place, for any reason, and without medical supervision.

A new clause added by MPs today to the Domestic Abuse Bill would repeal sections 58 and 59 of the Offences Against the Person Act, thereby removing abortion from the criminal law.

A separate clause would make home abortions legal for domestic abuse victims, effectively meaning that the supposedly temporary law passed in response to the coronavirus crisis, which authorized women in England to kill their preborn children at home by using both pills for a chemical early abortion, would become permanent.

Antonia Tully, director of campaigns for the Society for Protection of Unborn Children (SPUC), said the amendments are a scandalous attempt to hijack a bill designed to protect women from domestic abuse and that they “play straight into the hands of abusive men.”

“If they are passed unborn children will have no legal protection under the criminal law and dangerous home abortions will put vulnerable women at greater risk from coerced abortion,” she added.

SPUC is asking its supporters to urge MPs with a pro-life voting record to lobby the Speaker in the House of Commons, who will select the amendments to the Bill next week.

“It's the Speaker who selects which amendments are included in a bill,” Tully explained.

“We are urging supporters who live in a constituency with a pro-life MP to ask their MP to lobby the Speaker to throw out the abortion amendments.”

“Their amendment is muddled and makes little sense. However, it shows that the abortion lobby never gives up. And we must be ready to fight back.”

Williams said the amendments show that the abortion lobby is “not prepared to let go of the power to send women abortion pills in the post, which the government has said all along is a temporary measure.”

“They are trying everything, even to the extent of hijacking such an important piece of legislation as the Domestic Abuse bill,” she said.

“Domestic abuse is a scourge on society, and it is appalling that BPAS are willing to put abortion drugs into the hands of abusers in order to pursue their radical abortion agenda,” Williams concluded.