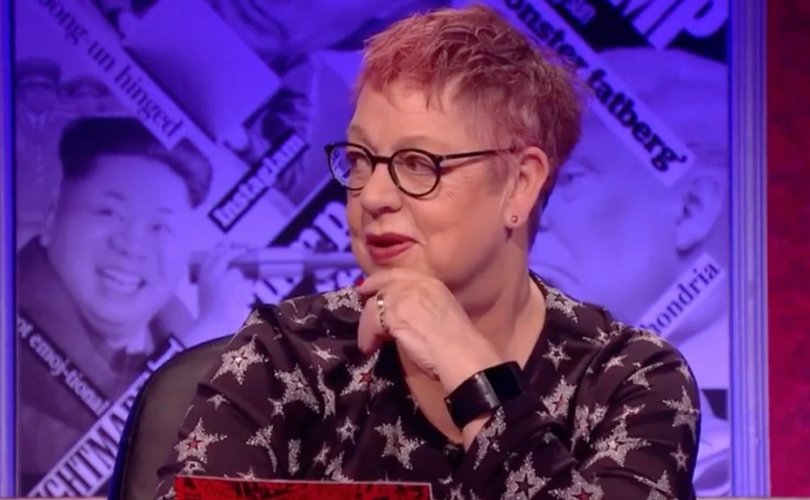 October 16, 2018 (LifeSiteNews) – It would be “a mistake” to let children decide whether they are transgender before they turn 18, English comedian Josephine (Jo) Brand has said.

The writer and actress, also previously a psychiatric nurse, has been married to husband Bernie Bourke for more than 20 years, and with him has two daughters who are in their late teens.

Brand made note that people with gender dysphoria have higher rates of mental health issues.

She also said that if one of her daughters identified as transgender she would be open to the idea, according to the Daily Mail, but she would want them to explore their options before taking any action on it.

“I would be open to the general idea of it,” she said in a recent interview. “But I also feel younger kids are at risk of making the decision too early, and to encourage them to make it any younger than maybe 18 to 20, even, seems young to me — is a mistake, really.”

“So I would just try to explore it profoundly before they went ahead,” Brand continued. “For example, you do read that mental health problems among people who have gender issues are much higher, and so I would prefer there to be a very long opportunity for counseling, shall we say.”

Experts have spoken against the dangers of entertaining the idea of gender fluidity with children.

Dr. Michelle Cretella, president of the American College of Pediatricians, has said it is child abuse to foster gender confusion in children by helping them “transition” to the opposite sex.

Cretella also took part in a panel discussion last month at the annual Value Voters Summit (VVS) gathering in Washington D.C., at which she voiced this same message.

Peter Sprigg, Senior Fellow for Policy Studies at Family Research Council, took part in the VVS panel as well, stating, “It is troubling when an adult adopts this transgender ideology, but it is tragic when a child falls victim to it.”

McHugh stressed that the medical treatments and surgical procedures now being performed on children are still experimental, with no good outcome guarantees.

“The scant data that is available for these treatments with hormones” are labeled in official literature as giving “very low-quality” evidence, said McHugh. Medical experts wouldn’t prescribe aspirin if it were backed with such low-quality evidence, he added, yet “we are changing lives” with these powerful drugs.

Last spring Australian Psychiatrist Stephen Stathis said that “many” youth are “trying out being transgender” because it’s trendy right now.

Former transgender Walt Heyer, who now advocates for those with gender confusion, said transgenderism is “a fabrication born of mental disorders,” and what gender confused children need is authentic psychiatric help.

Gender ideology continues to creep into schools, medical facilities and other venues, and the culture, while also having become a threat to parents’ rights.

Parents in Ohio lost custody of their 17-year-old daughter in February when a judge ruled that she should be allowed to receive therapy, including testosterone therapy, to identify as a boy.

Brand also spoke about how heated the transgender issue can be, between those with gender dysphoria feeling attacked and women feeling vulnerable, when the real issue is people posing as transgender to get at women.

“So, actually, it's not making moral judgments about trans people, it's not pointing the finger,” she said. “But people are just so angry, it's almost impossible to have the debate.”

Speaking about the issue in the last week while at Cheltenham Literature Festival, Brand stated, “A lot of people feel very wary about talking about the topic.”

“A lot of women feel if they say anything at all there is a kind of knee-jerk reaction of anger which has nothing to do with the content of what they said,” she added, “and because they feel frightened of being threatened. I mean, who wouldn't be?”