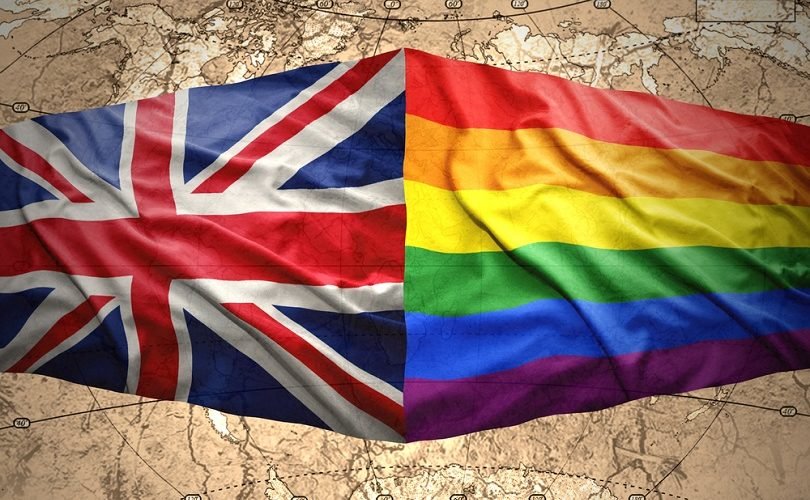 LONDON, July 5, 2018 (LifeSiteNews) – The United Kingdom plans to impose a nationwide ban on any practice of reparative or “conversion” therapy for individuals experiencing same-sex attraction, unwanted or not, the government announced in a new report.

“[T]he abhorrent practice of conversion therapy is still alive in our country,” the Government Equalities Office (GEO) announced in its newly-released LGBT Action Plan for “improving the lives” of LGBT people. “We will bring forward proposals to end the practice of conversion therapy in the UK, and take further action on hate crime as part of our upcoming refresh of the 2016 Hate Crime Action Plan.”

The 4.5-million-pound ($5.9 million) report surveyed more than 108,000 LGBT individuals, NBC News reports. It “will set out concrete steps to deliver real and lasting change across society, from health and education to tackling discrimination and addressing the burning injustices that LGBT people face,” British Prime Minister Theresa May declared.

Citing that 2% of survey respondents have experienced “harmful” treatment and an additional 5% have been offered it, the GEO confirmed it intends to “fully consider all legislative and non-legislative options to prohibit promoting, offering or conducting conversion therapy.”

More than half of respondents said religious groups conducted their therapy, while others said it was carried out by medical professionals, community members, family members, or members of other kinds of unidentified organizations.

“[W]e are not prepared to stand idly by,” the report declared. “Our intent is protect people who are vulnerable to harm or violence, whether that occurs in a medical, commercial or faith-based context.”

Reparative therapy is intensely controversial in large part because it challenges the notion that sexual attraction is biologically rooted and unchangeable. Its detractors claim the practice is dangerous and ineffective, often by characterizing it with examples of outdated fringe practices that physically harm patients against their will. In reality, most modern reparative therapy consists of traditional counseling.

In 2009, American Psychological Association task force admitted there were “no scientifically rigorous studies of recent SOCE [Sexual Orientation Change Efforts] that would enable us to make a definitive statement about whether recent SOCE is safe or harmful and for whom.”

Despite the GEO purporting to act in homosexuals’ own best interests, many former homosexuals have attested that they wanted and benefitted from the treatment.

“At the very heart of the homosexual condition is conflict about gender. In the boy, we usually see a gender wound that traces back to childhood. He comes to see himself as different from the other boys,” wrote Dr. Joseph Nicolosi, the pioneer of reparative therapy who died last year. “Gender woundedness usually exists as a silent, secret fear — one that the boy’s parents and loved ones only vaguely suspect. The boy has felt this way for as long as he is able to remember. That differentness creates a feeling of inferiority and isolates him from other males.”

David Pickup, one of the ex-gay individuals helped by Nicolosi, says that he grew up as a “sensitive boy” who was “defensively detached” from his father, as well as sexually molested. As such, he was “set up for homosexuality” and attributes his former same-sex urges to a sense of “gender identity inferiority.” But with therapy, he was able to raise his self-esteem as a man, satisfy his “male emotional needs” that were lacking in his relationship with his father.

“My same-sex attractions automatically, spontaneously […] through this therapy began to lessen and dissipate,” Pickup explained. “So reparative therapy really worked for me. It helped save my life.”

In recent years, even some homosexual academics have begun admitting that sexual attraction is changeable. In 2016, the American Psychological Association’s (APA) Dr. Lisa Diamond advised LGBT activists to “stop saying ‘born that way and can’t change’ for political purposes, because the other side knows it’s not true as much as we do.”

The UK's report went on to claim that the government was “not trying to prevent LGBT people from seeking legitimate medical support or spiritual support from their faith leader in the exploration of their sexual orientation or gender identity,” an assurance seemingly at odds with the blanket declaration that conversion therapy would no longer be accessible at all.

Tellingly, the GEO admitted that it “did not provide a definition of conversion therapy in the survey,” potentially enabling the lines to be blurred between abusive fringe practices that are commonly presented as representative examples, and the type of legitimate counseling supported by mainstream religious groups.

The therapy ban was just one of 75 pro-LGBT commitments contained in the plan. Others include more stringent reporting and policing of anti-LGBT hate crimes; the appointment of a national LGBT health adviser; increasing school anti-bullying initiatives; greater attention on LGBT domestic violence, homelessness, and asylum cases; better reporting of online LGBT “abuse”; and more.

The Action Plan is a statement of intent rather than a set of proposals, so the full details of the conversion therapy ban and the other proposed policies will have to be decided in the future by either Parliament or administrators.