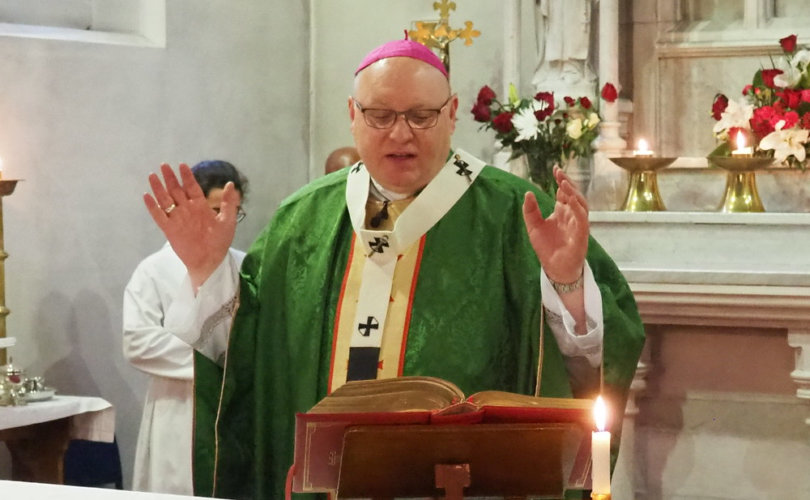 SOUTHWARK, United Kingdom (LifeSiteNews) – The Catholic Archdiocese of Southwark, U.K. is facing criticism after it prevented a pro-LGBT author from speaking at two Catholic state schools, saying the visits would not be “permissible in a Catholic school,” and would be against “well-known theological and moral precepts.”

On Monday March 7, pro-LGBT young adults author Simon James Green was due to speak and sign books at The John Fisher School, a state-run “voluntary-aided” Catholic school under the trusteeship of the Archdiocese of Southwark, led by Archbishop John Wilson.

Green has been described as a “leading LGBTQ+ author,” and as “one of the UK’s leading writers of LGBTQ+ teen fiction.” As advertised by the all-boys school, Green was due to speak to children aged 12 and 13 about “’Owning the Awkward’ (or how to navigate the teenage years!), his books, writing for young adults and getting published.” The event was part of the school’s “World Book Day and LGBTQ+ History Month celebrations.”

Catholic Truth Scotland launched a campaign against the event, urging parents and any concerned to write to the school and the archdiocese, protesting the event. “Hosting such an event where young people – in this case young boys –  are being misled into accepting, as normal and good, sexual behaviour which is condemned by Christ’s Church is a major problem today,” warned Catholic Truth Scotland (CTS).

CTS added that the pupils would “look back on this event with horror at having been exposed to something which Christ, through His Church, reveals is behaviour which ‘under no circumstances can be approved.’ (Catechism of the Catholic Church #2357).”

Following this outcry against Green’s visit, the Education Commission of Southwark Archdiocese published a statement advising against the event. Signed by Dr. Simon Hughes, the Director of Education and Diocesan Schools Commissioner, the statement read:

“From time to time materials or events emerge for consideration that fall outside the scope of what is permissible in a Catholic school, because they do not comply with all aspects of the tests cited above – for example the protected characteristic ‘religion’ (Part 2 of the Equalities Act 2010) and all that that encompasses in our context.

In such circumstances, we have no alternative but to affirm our unequivocal and well-known theological and moral precepts and to act in accordance with them. The book-signing event scheduled for 7 March 2022 at The John Fisher School, Purley is one such event and we have recommended that the school’s leaders cancel it.”

Despite this, John Fisher School planned to continue with the event, prompting the archdiocese to step in and cancel Green’s visit, and also to remove a number of the school’s “foundation governors,” which are appointed by the archdiocese who supported the event.

Prior to this, the school’s chaplain, Father James Clark, had dissented from his pro-LGBT colleagues in the school, warning parents by email that Green’s writings “are not in line with Catholic Education and are contrary to the ethos of our school and to the teachings of the Church.” Fr. Clark warned that how school governance “have decided to disobey the clear instruction from the diocese and this will have serious consequences in the weeks ahead.”

He rejected the notion that the archdiocese was against “diversity,” arguing instead that Green’s books promote “a lifestyle choice that is contrary to the teachings of Jesus Christ, and therefore has no place in a Catholic school.”

Green had been due to visit St John’s Primary School in Gravesend, another school under the trusteeship of the Archdiocese, but this visit was also cancelled following the Archdiocese’s intervention.

CTS welcomed the news, thanking “all bloggers who have contributed to this thread, and who have written to the School and Archbishop, thus showing true Christian charity and compassion. Sincere thanks, too, to those on the frontline who stood their ground and worked hard to effect this cancellation.”

U.K. author and catechist Deacon Nick Donnelly along with Catholic blogger Mark Lambert praised the archdiocese for preventing the event and “not allowing children to be exposed to this ideology. Catholics believe everyone is made in the image & likeness of God & due respect because of THAT principle, not because of their sexual orientation.”

For once, a Catholic diocese @RC_Southwark have done the right thing by not allowing children to be exposed to this ideology. Catholics believe everyone is made in the image & likeness of God & due respect because of THAT principle, not because of their sexual orientation. https://t.co/qPgpQXpCSy

Green has since launched a campaign against the archdiocese, urging social media users to lodge protests against the Archdiocese. He wrote:

“We need to make some noise. Like, RT, and amplify. I want @RC_Southwark to see how wrong they are. Don’t bother the school – they’ve done nothing wrong. They’ve been lovely. More importantly I want the LGBT students there, for whom this sends the most terrible message, to see how much love and support there is for them all. That they’re fine, they’re not sinful, problematic or in any way wrong.”

Campaigners have since joined Green in condemning the archdiocese, with the National Secular Society calling for government funding to be removed from Catholic schools.

LifeSiteNews contacted the archdiocese for comment but was unable to reach anyone.