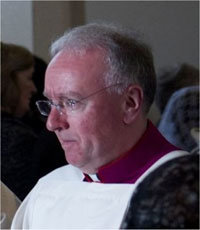 PORTSMOUTH, England, March 13, 2014 (LifeSiteNews.com) – “When people are not in communion with the Catholic Church on such a central thing as the value of life of the unborn child and also in terms of the teachings of the church on marriage and family life – they are voting in favor of same-sex marriage – then they shouldn’t be receiving Holy Communion,” said Portsmouth Bishop Philip Egan in a wide-ranging on-camera interview with LifeSiteNews last week.

Bishop Egan explained that rather than a punitive measure, the denial of Holy Communion is “always an act of mercy.”  It is done, he said, “with the hope and prayer that that person can be wooed back into full communion with the Church.”

“Nobody is forced to be Catholic. We’re called by Christ and He’s chosen us, it’s a free choice. We live under the word of God. It’s not my truth, its God’s truth,” he said.

“One would hope that in that case it would encourage someone to come back to seek communion with the Lord with the truth and say I’m sorry I got lost.”

The difficulties faced by Catholics and other Christians in an increasingly secular and intolerant Britain are keenly felt. Bishop Egan has been outspoken in his defence of life and family, writing to the Prime Minister and speaking eloquently on the issues.  He has himself experienced backlash both in terms of “unpleasant correspondence” and even a confrontation at the Cathedral.

For him, however, the duty to witness to the truth in love is not an option despite the persecutions that may come.  Christians, he says, “are bound to come into conflict” with the secularized culture.

We must not go looking for a fight, “but we will, being Christian, have to suffer, and have to go to the cross,” he said. “This is one of the ways, particularly as a priest or a bishop, in which that cross is going to come out, because you have to witness to the truth.”

From the martyrs at the time of the Reformation, he said, “we can take consolation and solace.”  In addition he said, “A relationship with Christ is essential where we are truly united in the heart of Christ. … With prudence, wisdom, praying for the guidance of the Holy Spirit, we support each other in that and in our suffering.”

Bishop Egan stressed that the witness to truth in the Church is made in love for “all persons especially those of same-sex attraction.”  He noted that God has designed us for happiness and that “happiness is found only in God — it is found ultimately in our relationship with God.”

He suggested attempting to draw society back to the Christian roots of the concepts they now use to discriminate against people of faith.  Concepts such as equality and tolerance, diversity and respect, are taken from Christianity, he said.

“So often the words they use, used with a totalitarian edge, they are awash on a sea of relativism,” he said. “Somehow,” he said, we must “draw them back to Christian underpinnings. … Otherwise we’re going to be heading into a police state if we carry on in these directions.”

Looking to the future for Catholics in England, Bishop Egan’s views are mixed.  He is at times “not very hopeful” because of the fact that “in the Catholic community we’ve not effectively communicated the beautiful vision of marriage and family life that Christ gives us through the teachings of the Church.”  Bishop Egan said that in order to evangelize and woo people toward Christ and the truth, Catholics themselves must first be convicted.

However, he adds “the prospects are still good if we can hold the line and not lose our nerve.”

For example, while the UK government is mandating sex education in Catholic high schools, Catholic schools are able to provide programs that fit the government targets “but clearly within the marriage and family life context and values of the Catholic community.”

“We must say look, these are our values, we have to have the freedom to teach and educate and form our children in the Catholic way of life.”

As to the future regarding withholding Holy Communion from Catholic politicians who support abortion and same-sex ‘marriage’, Bishop Egan says, “I personally would be in favor of saying that somebody should not be receiving Communion myself here within the diocese.”

He added however that he’d “have to act really with the other members of the bishops’ conference.”

“We need to discuss this as a bishops’ conference,” he said. “I’ve already indicated to you my sympathies – if somebody is not in communion with the Catholic Church they should not be receiving communion.”