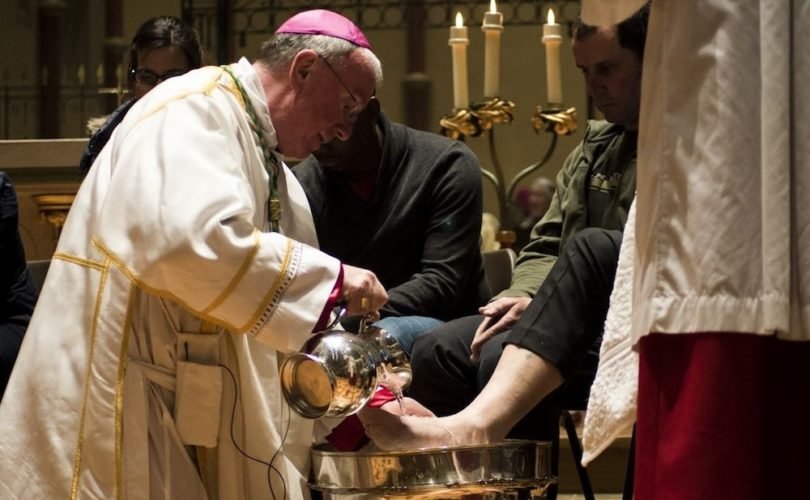 PORTSMOUTH, UK, March 23, 2015 (LifeSiteNews.com) — A UK bishop has advised his priests to review the charities their parishes support to make sure they are not connected to activities that oppose Church teaching.

“I am reluctant to burden you with yet more work but I would like to ask you to undertake a review of all the relationships your parish has with external charities,” said Bishop Philip Egan of Portsmouth in a letter to clergy.

“A number of people have asked me in the last couple of years since becoming bishop about third-party charities: which ones our parishes and the diocese itself can work with and support, and under what conditions,” the bishop wrote, pointing out that the charitable object of the diocese must align with the promotion of the Catholic faith.

“After a lot of discussion and reflection, and having sought advice from those both inside and outside the diocese, I have decided to issue the attached guidance,” Bishop Egan said.

In the “Guidelines on Cooperation with Third-Party Charities,” the bishop offers several example scenarios where the guidelines would be helpful in determining the suitability of a charity looking for support from parishes, in the light of Catholic moral and social teaching.

One example is a charity that, while claiming to operate according to Christian principles in areas of development and disaster relief, is also known to engage in or co-operate with initiatives to promote the use of contraception and abortion.

“That the charity does many other things which we might find good and in accordance with Catholic teaching does not alter the fact that any co-operation with this charity constitutes co-operation with that grave moral evil,” the guidelines state. “In seeking to solicit funds for that charity, we would be engaged in an act which would directly result in a foreseen outcome that was gravely wrong. In attempting to raise funds for the charity, we would be seen to endorse its acts – both those that were good and those that were bad – and this would constitute formal co-operation with that grave moral wrong.”

“The virtue of prudence requires that, in the event of an approach from a third-party charity, in order properly to apply these criteria, full enquiries into the activities of that charity be undertaken. If, indeed, the charity’s activities include acts whose morality is not immediately apparent, further assistance should be sought from the Bishop’s office,” Bishop Egan said.

Another example is of “faith in action” activities undertaken by confirmation candidates in preparation for reception of the Sacrament, such as volunteering at a soup-kitchen or helping to redecorate a half-way home at a charity for the homeless and ex-offenders.

If the charity is found to also distribute condoms and give abortion advice along with its other services, the bishop said that to avoid scandal any participation by the volunteers would “need to be accompanied by a clear public statement distancing the Confirmation candidates from these activities.”

In a final example, Bishop Egan describes a charity that promotes workshops on “domestic dispute resolution” to schools and parishes. However the charity has also won an award from the homosexual activist group Stonewall.

The bishop said working with such a charity in a way that suggested an endorsement of its homosexual advocacy “could be seen to constitute formal co-operation in gravely immoral acts.”

“The virtue of prudence would counsel against any co-operation” with such a charity, he said.

The full text of the “Guidelines on Cooperation with Third-Party Charities” and Bishop Egan's letter to priests is available here.