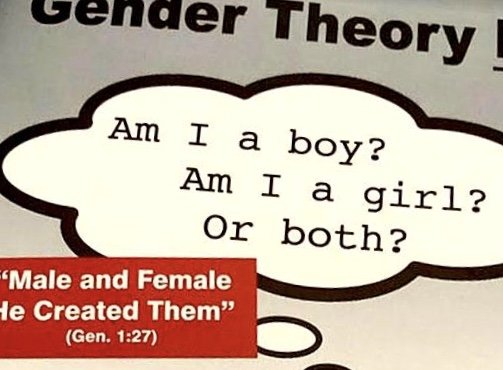 LIVERPOOL, England, June 18, 2019 (LifeSiteNews) — Leaflets produced by a traditionalist Catholic group that deplored gender theory were inserted into a magazine distributed by the Archdiocese of Liverpool, eliciting apologies from two bishops.

Dubbed “transphobic” by establishment media, leaflets created by Tradition Family and Property, an international traditionalist Catholic organization, were included in the archdiocesan publication Catholic Pic that was handed out to Catholics students of the Archdiocese of Liverpool. According to the leaflets, “sophisticated activists” seek to impose “anti-God” views on children. The cover of the leaflets bear the image of a group of boys and girls asking “Am I a boy? Am I a girl? Or both?” and is accompanied by the Bible quote: “Male and female, He created them.”

The leaflets describe “Gender Theory” as a “delirious ideology claiming everyone can fancy themselves as a man, woman, neither or both at the same time according to mere whims.” They claimed that “sophisticated activists are already at work to impose their anti-Christian and anti-God views on children at your school.”

Transphobic leaflets describing gender theory as a “delirious ideology” based on “mere whims” handed out to Catholic schools.
Distributed by the Archdiocese of Liverpool, it was given to pupils claiming “sophisticated activists” are trying to impose anti-God views on children

According to a statement from the Archdiocese of Liverpool, Mersey Mirror, which distributed the magazine, will issue an apology to the schools for adding the leaflets to the publication.

“An insert was inadvertently placed in the June edition of the Catholic Pic, the magazine of the Archdiocese of Liverpool, and in a number of Catholic publications across the country,” said a spokesman in a report by The Independent. “It is normal procedure for such inserts to be sent to the publishers in advance for review. In this instance, that did not happen. The content of the leaflet is not endorsed by the Archdiocese of Liverpool and it should not have appeared. In light of this incident, procedures have been reviewed ensuring that all future inserts are checked prior to publication.”

The leaflets also appeared in a number of other Catholic publications distributed to schools across the United Kingdom. The Diocese of Northampton, which is led by Bishop Peter Doyle, has also apologized for including the leaflet in the diocesan magazine.

My friends got three copies of this violently anti-trans leaflet in their SE England Catholic diocese newspaper yesterday – the same paper that is distributed to all Catholic schools in the area and has already gone home with students. pic.twitter.com/OitBOaM7CO

The bishops’ apologies came just days after the Vatican’s Congregation for Catholic Education released a 31-page document titled “‘Male and Female He Created Them’: Towards a Path of Dialogue on the Question of Gender theory in Education.” The Congregation said it “wishes to offer … some reflections which, it is hoped, can guide and support those who work in the education of young people, so as to help them address in a methodical way … the most debated questions around human sexuality.”

While adopting an approach to gender theory that is “based on the path of dialogue,” the Congregation says the document is “intended for the educational community involved in Catholic schools, and for all who, animated by the Christian vision of life, work in other types of schools.”

In an interview with LifeSiteNews, Dr. Gerard J.M. van den Aardweg, a psychologist and psychoanalyst who specializes in the treatment of persons with same-sex attraction, condemned the non-magisterial document, saying “the aggressive neo-pagan sexual ideology of the world has no wisdom we might share. The task of the Church is not dialoguing but teaching and correcting. There is a relentless spiritual war going on in the field of sexuality, marriage, and the family.”