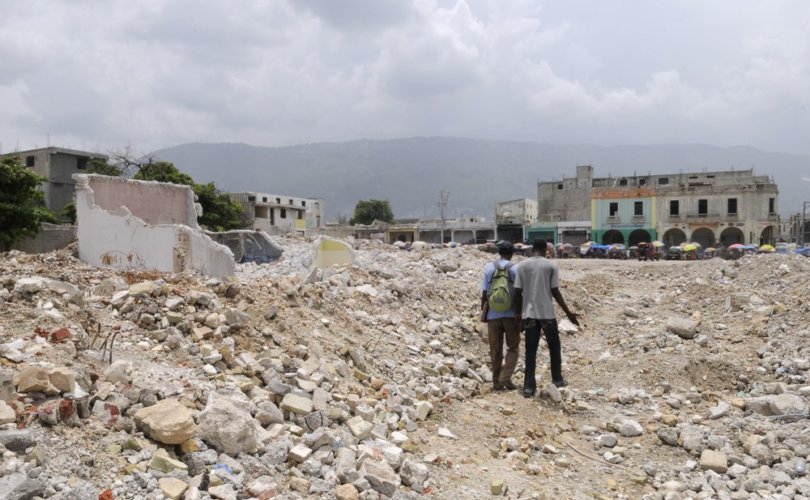 A couple walking through the rubble of a building in Port-Au-Prince, Haiti on August 21, 2010.Shutterstock.com

February 13, 2018 (LifeSiteNews) – The official charity of the UK’s Catholic bishops hired a former Oxfam worker who was involved in that charity’s sex-with-earthquake victims scandal, which is just now coming to light.

Roland van Hauwermeiren, Oxfam’s Haiti director, admitted to using prostitutes himself. He and several others were sacked or allowed to resign provided they cooperated with an internal Oxfam investigation, which the charity did not report to Haitian police.

The prostitute-hiring workers were then allegedly able to obtain jobs at other charities without any warnings from Oxfam. One of these workers went on to work at the Catholic Agency for Overseas Development (CAFOD), which is the official Catholic aid agency for England and Wales.

On February 12, CAFOD announced it put this worker on leave.

“The Times newspaper on 10 February 2018 wrote that a current CAFOD employee was named as an Oxfam staff member who had been working in Haiti in 2011, amidst accusations of sexual misconduct,” Chris Bean, Director of CAFOD, said in a statement.

“We were not aware of allegations made against this employee and received two references, as standard practice, at the time of recruitment,” said Bain. “Following concerns raised in this article, the staff member has been put on leave while we examine the issues raised and follow our Code of Behaviour protocol to determine next steps.”

“We have robust safeguarding and whistle-blowing policies and practices in place to ensure that vulnerable people are protected,” he said. “Nonetheless, we are committed to regularly reviewing our procedures, and therefore are joining an initiative with other UK-based overseas development agencies and the Charity Commission to strengthen cross-sector information sharing and protection of vulnerable people.”

Oxfam promotes contraception and abortion around the world. It’s unclear what role the former Oxfam employee was given at the Catholic charity.

In 2016, CAFOD refused to remove from its Theological Advisory Group a theologian advocating for abortion in Poland.