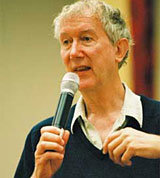 When the former head of the Dominican order, who has called for more acceptance within the Catholic Church of homosexuality, was invited to deliver a keynote address to a Catholic conference in Ireland last year, it prompted calls from pro-family groups and individuals to cancel the engagement. Those calls are being repeated as Fr. Timothy Radcliffe will be the featured speaker at a Catholic conference for youth in March next year.

The Flame2 Youth Conference 2015, to be held at Wembly Arena on March 7, 2015, is organized by the Catholic Youth Ministry Federation, which is affiliated with the Catholic Bishops of England and Wales. Organizers say the conference will have “bursts of input, interspersed with world class music and drama, in an atmosphere full of joy.” Other speakers include Filipino Cardinal Luis Tagle, archbishop of Manila; Cardinal Vincent Nichols, archbishop of Westminster; Baroness Sheila Hollins; and British worship leader Matt Redman.

The conference biography for Fr. Radcliffe says that youth wrote in their evaluations of the 2012 youth conference that he was the speaker with “the greatest impact.” He travels the world speaking and lecturing and is the author of many popular works on spirituality. According to the biography, he “brings humour and great joy, and he is able to connect with young people in a way that is warm, encouraging and challenging.”

Fr. Radcliffe, who taught scripture studies at Oxford University and served as Master of the Dominican Order from 1992 to 2001, is also known for bringing a decidedly heterodox approach to matters of human sexuality. He has celebrated the notorious “Soho Masses” for active and unrepentant homosexuals, sponsored by the Archdiocese of Westminster, until pressure was brought to bear to stop them.

In a 2012 article for the liberal Catholic magazine the Tablet, Radcliffe defends the Church teaching that same-sex “marriage” is impossible, but adds: “This is not to denigrate committed love of people of the same sex. This too should be cherished and supported, which is why church leaders are slowly coming to support samesex civil unions. The God of love can be present in every true love.”

In a letter to the London Times before the document was officially published, Radcliffe recommended instead that persons expressing “homophobia” ought to be barred. “Any deep-rooted prejudice against others, such as homophobia or misogyny, would be grounds for rejecting a candidate for the priesthood, but not their sexual orientation,” he said.

In an article for the Tablet, he said, “I have no doubt that God does call homosexuals to the priesthood, and they are among the most dedicated and impressive priests I have met.”

“So no priest who is convinced of his vocation should feel that this document classifies him as a defective priest. And we may presume that God will continue to call both homosexuals and heterosexuals to the priesthood because the Church needs the gift of both.”

“Seminarians should learn to be at ease with whatever is their sexual orientation, content with the heart that God has given them, but any sort of sexual sub-culture, gay or straight, would be subversive of celibacy,” he continued. “A macho subculture filled with heterosexual innuendo would be just as inappropriate.”

On the document’s assertion of the need for priests to develop a masculine notion of “spiritual fatherhood,” Radcliffe said he knows little, but adds, “There is little evidence of muscular Christianity in the Vatican.”

“If the role of the priest was to be a model of masculinity, then he would be relevant to less than half of the congregation and one could therefore argue that women should also be ordained as role models of femininity.”

“I presume that the ‘spiritual fatherhood’ is above all exercised through the care of the people and the preaching of a life-giving fertile word, but neither has any connection with sexual orientation.”

A year ago, when Fr. Radcliffe was scheduled to be the featured speaker at Dublin’s Divine Mercy conference, controversy was stirred when the US Catholic EWTN television network refused to broadcast the lecture. On an EWTN program, Irish MEP Kathy Sinnott said his views are “at sharp variance to Catholic teaching.”

Conference organizers in Dublin, however, ignored the calls to cancel the priest’s appearance.

Anthony Ozimic, communications manager for the Society for the Protection of Unborn Children, one of the groups criticizing the Dublin event, told LifeSiteNews today that the real problem is not Fr. Radcliffe but his supporters in the UK hierarchy.

“Fr. Radcliffe is the darling of the Catholic Bishops’ Conference of England and Wales,” Ozimic said.

Last month Radcliffe was also a guest speaker to the Friends and Supporters Group of the Bishops’ Conference, introduced by Archbishop Peter Smith, the conference’s vice-president.

“The regular scandals caused by Fr. Radcliffe's talks are but symptoms of the Bishops’ Conference’s complicity in dissent from Catholic truth, including on pro-life/pro-family teachings,” Ozimic said.

LifeSiteNews contacted the Catholic Bishops’ Conference of England and Wales, but did not hear back by press time.