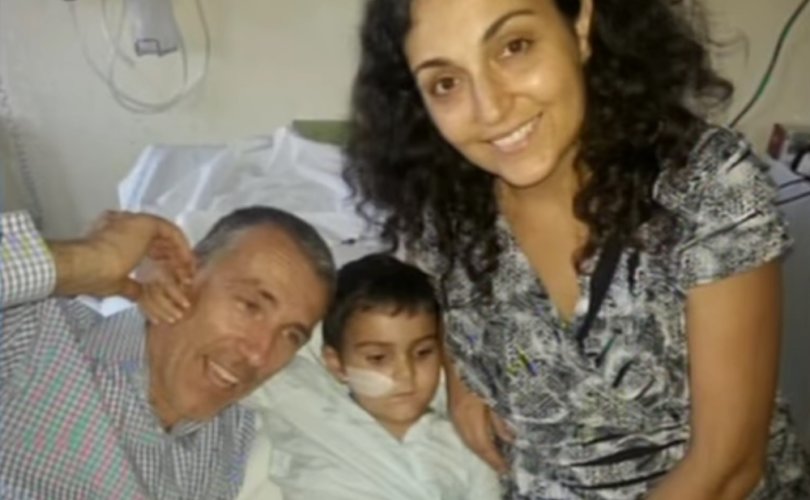 SOUTHAMPTON, England, April 23, 2018 (LifeSiteNews) — The parents who were jailed for “abducting” their son from a British hospital in 2014 to seek trailblazing cancer treatment in Europe recently announced the boy has been cancer-free for more than three years.

The story of Ashya King takes on particular significance as the parents of Alfie Evans fight for the right to take their toddler to Rome in the face of a UK court decision allowing doctors to remove Alfie’s ventilator against his parents’ wishes, which would mean certain death.

Brett and Naghemeh King set off an international manhunt after they removed Ashya, then 5 years old, from Southampton General Hospital against medical advice and fled the country, reports the UK Daily Mail.

After two days on the run, the Kings were arrested in Spain at the request of British authorities, and held for 72 hours in Madrid on charges of child cruelty. Ashya was placed under guard in a Spanish hospital, “where he howled with despair and confusion,” the Daily Mail reported.

According to the BBC, efforts to extradite the couple back to Britain failed when prosecutors concluded the risk to Ashya King’s life “was not as great or immediate as… originally thought.”

The Kings subsequently won the right in High Court to take Ashya to the Czech Republic for revolutionary proton beam treatment, not available under the UK’s National Health Service, according to the Daily Mail.

Surgeons in Southampton General had removed the aggressive medulloblastoma in July 2014, with a follow-up operation in August.

However, the operations left Ashya left unable to speak, eat or drink and was reliant on a food pump, the BBC reported.

He was scheduled for radiation and chemotherapy in Southampton General when his parents took him from the hospital. They were afraid the conventional treatment would leave him chronically bedridden, or kill him, his father Brett said.

British doctors maintained the Kings reduced Ashya’s chances of survival by 30 percent by taking him to Prague, but the couple received a report in March from Southampton General that their son, now eight, remains cancer-free, it reported.

King wept when he received the letter, he told the Mail.

“My wife said to me: ‘It’s all OK now. There is no need to cry.’ But there were so many emotions: happiness, relief. I can’t put it into words.”

One of the King’s seven children,  Ashya today attends school and, aside from a slight weakness on his right side, shows no sign of his former illness, the Daily Mail reported.

“He’s probably the happiest he’s been since he was diagnosed,” Brett King told the Daily Mail. “He’s excited about everything. We’ve seen him depressed, not able to speak and barely able to move. He’s so full of life. When people think of Ashya they remember a sick little boy in a bed, but he’s not that little boy any more.”