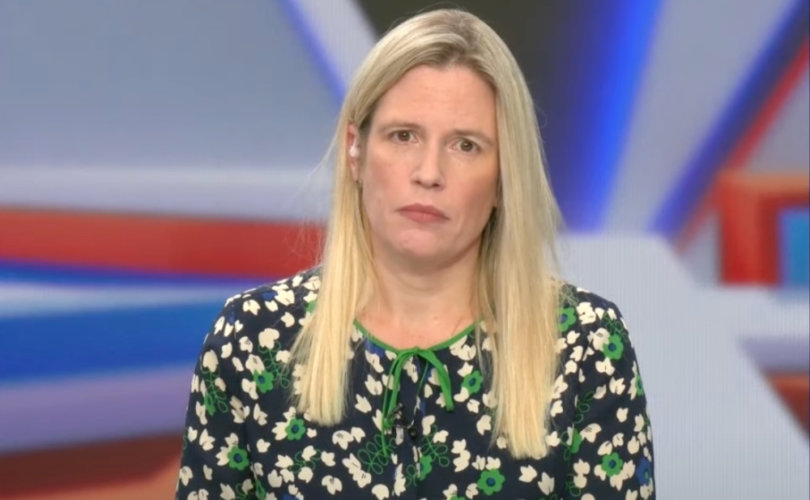 (Reclaim The Net) – Police officers from the United Kingdom’s Surrey Police force arrested Catholic journalist Caroline Farrow after she was reported for allegedly posting a “grossly offensive message.” The officers seized Farrow’s electronic devices, questioned her at Guildford Police Station, and released her under investigation.

Farrow has denied posting the messages, said that she was falsely accused of posting messages written by other people, and described the police’s actions as “absurd.”

“I haven’t sent any threatening or indecent messages,” Farrow tweeted. “I was shown posts from KiwiFarms written by other people. I suspect these are the grossly indecent and threatening messages.”

In a statement, Surrey Police said:

When we receive an allegation of a crime, in this instance one where a grossly offensive message is said to have been communicated, it is our job to assess it alongside any available evidence to identify if an offence has been committed. If it has, we gather further evidence and carry out an investigation to prove or disprove the allegation. That is exactly the process that is being followed in this case.

According to Farrow, two police officers showed up at her home while she was preparing dinner and told her that they’d come to arrest her for “malicious comms.” Farrow said she asked the officers whether they had a warrant but they told her they didn’t need one, and one officer barged his way into her home.

How it started. No warrant. I opened the door and this guy pushed it open to come in. pic.twitter.com/V1IAEBSh5Z

Farrow stated that all of her devices were seized by the police, including a Chromebook that she was using for work, and an iPad that her 10-year-old daughter with autism uses for homeschooling and to store her Harry Potter audiobooks.

Farrow added that because her devices were charging in the parish offices where her husband works, which is a separate building to her house, the police also obtained permission to enter church premises.

“My husband didn’t want his parish office and workspace invaded by plod investigating whether his wife used insulting words on the internet,” Farrow tweeted. “He couldn’t actually believe what was unfolding.”

Farrow claimed that she was frisked, arrested, and then held in cells for a few hours.

How it finished. Being frisked and whisked off to be taken to the cells and shown some memes posted by someone else. pic.twitter.com/dC8GVD6Vra

She also said the police sergeant told her that emailing people “malicious messages” was a crime, and that police officers then clarified that she hadn’t emailed anyone but had “allegedly written some insulting messages on the internet.”

“An allegation of a crime where a grossly indecent message is said to have been communicated.”

Was it communicated or not? How can it be said to be? How can you take any action in that context? 🤡

According to Farrow, the police officers then showed her a series of posts which included a photoshopped photo of the Queen and her corgis, a cartoon, and a post from the online forum Kiwi Farms which contained screenshots from the online forum Mumsnet. Farrow said the police asked if she’d seen the photoshopped photo before, asked her to explain what was going on in the cartoon, and accused her of operating several Kiwi Farms accounts.

“I mean literally posts were printed from KiwiFarms and given to the police as evidence and the police have taken the complainants’ word for it in the utter absence of evidence,” Farrow tweeted. “It’s unreal.”

Farrow suggested that she was accused of posting to Kiwi Farms at 11 am on Sunday, June 19, 2022 and said she had an alibi.

“On Sunday 19th June 2022 I was playing the church organ for the 11am Mass at Holy Angels…A brief check on YouTube would provide an alibi,” Farrow tweeted. “Anyone who has played organ for Mass will understand that you cannot be playing on your phone & posting on the internet.”

— Article continues below Petition —
Demand that the Archdiocese of Indianapolis let Kim Zember speak!
Show Petition Text
4962 have signed the petition.
Let's get to 5000!
Thank you for signing this petition!
Add your signature:
Show Petition Text

Farrow also claimed that police officers admitted they had no evidence of her posting the alleged insulting messages.

“I asked to see evidence of lots of allegations,” Farrow tweeted. “The police said ‘we don’t have any yet, that’s why we’re talking to you, to get your side.’ It’s really worrying they can do this. I happily gave them all the passwords for all my devices.”

I asked to see evidence of lots of allegations. The police said “we don’t have any yet, that’s why we are talking to you, to get your side.”

It’s really worrying they can do this. I happily gave them all the passwords for all my devices.

Farrow added: “It’s scary that the police can take someone’s word for something and just come and arrest you. All they could say is ‘we’ve had an allegation which needs to be investigated.’”

Farrow said her family is “appalled, horrified and angry.”

Farrow was previously investigated by police after she was accused of “misgendering” someone on Twitter.

While Farrow maintains her innocence of the accusations, the incident is the latest such in which U.K. police have tried to arrest people over “offensive” speech.

Surrey Police previously visited the home of a parish councilor to warn him that he could be arrested for posting an image on Facebook that said “trans rights are very, very boring.” Police in other parts of the country have also sent five officers to arrest a man for posting a lesbian, gay, bisexual, transgender (LGBT) flag swastika on social media and visited the home of a women’s rights campaigner for “being untoward about pedophiles” in a YouTube video.

The new Justice Secretary Brandon Lewis has spoken out in support of people’s right to offend others and said that it will soon be protected by new laws.

The Justice Secretary said he would be bringing forward new laws to protect free speech and the right to offend.

“I fundamentally agree in people’s right to offend,” Mr. Lewis told a Policy Exchange meeting at the Conservative Party conference in Birmingham this week.

We need to ensure that we have a system of human rights that doesn’t create or give cover for cancel culture. I feel that today there’s a certain difference to what happened in the past because even our tolerance has changed. We are less tolerant of others and that is evolution and that happens to debate.

If you restrict people’s ability to debate and you have a punitive culture then things don’t move on and they become trapped in one person’s worldview, which I think is very, very dangerous.