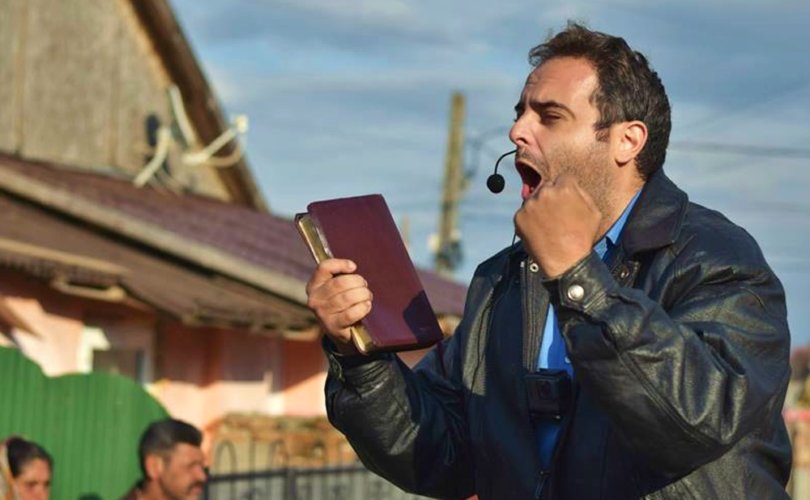 LINCOLN, England, December 8, 2017 (LifeSiteNews) – A U.K. Christian street preacher accused by Muslims of hate speech and convicted by a lower court has had the ruling overturned by a higher court this week.

Daniel Courney, 33, was convicted by Lincoln Magistrates Court in September of using “threatening and discriminatory language” while preaching in Lincoln in June.

Courney, an American missionary who served in the United States military and has been a missionary in Nepal and India for 8 years, preached a message of repentance and of the need to believe in Jesus Christ to be saved.

A Muslim woman and her family who heard Courney’s message on the street claimed the preacher singled them out and called them “ISIS” and told them to “go back to your country.” The Muslims reported the matter to police who arrested the preacher.

Courney denied the allegations. Despite this, however, he was charged under Section 5 of the Public Order Act with using “threatening or abusive words or behaviour or disorderly behaviour within the hearing or sight of a person likely to be caused harassment, alarm or distress.”

Lincolnshire Live reported that Adrian Clark, a friend of Courney, posted on Facebook in September that the judge who found him guilty was biased against the Christian message of salvation only through Jesus Christ.

“The judge was an impassioned multi-culturalist. He seemed antagonistic to the one person publically declaring another’s religious beliefs as being wrong,” Courney’s friend wrote.

“He trusted the prosecution witnesses despite their glaring inconsistencies. Despite Daniel being a man who serves his community in India and Nepal without fear or favour … and courageously protected a Muslim from being beaten in Bristol, this seemed to have had no bearing on the judge’s finding,” the friend added.

During the appeal, the Christian Legal Centre’s solicitor Michael Phillips argued that  English law provides Courney with the freedom to preach Christianity, and that this has been successfully upheld for many years.

The Crown Court judge agreed and overturned the conviction.

“We are proud to represent street preachers in our country as they share the love of Jesus Christ with people on the street. This case once again highlights the need for police operating in these situations to understand how the law protects free speech,” she said.

After his conviction was overturned, Courney said that he had come to the United Kingdom to “bring back the message of Jesus Christ.”

“The message is a simple one: repent and believe in the Lord Jesus Christ and do not follow false religions. Unfortunately, I’ve had to travel to and from the United Kingdom four times in the past three months. I have had other restrictions on my liberty during that time. I have been held in police custody and accused of being a hate preacher,” he said.

“At all times I simply wanted to proclaim the gospel of Jesus Christ,” he added.

Christian street preachers in the U.K. are fighting an uphill battle to revive faith in a country where Christianity is on its way to extinction.

“With a continued rate of decline at this level, the number of UK-born Christians would reduce to zero by 2067,” the survey predicted.