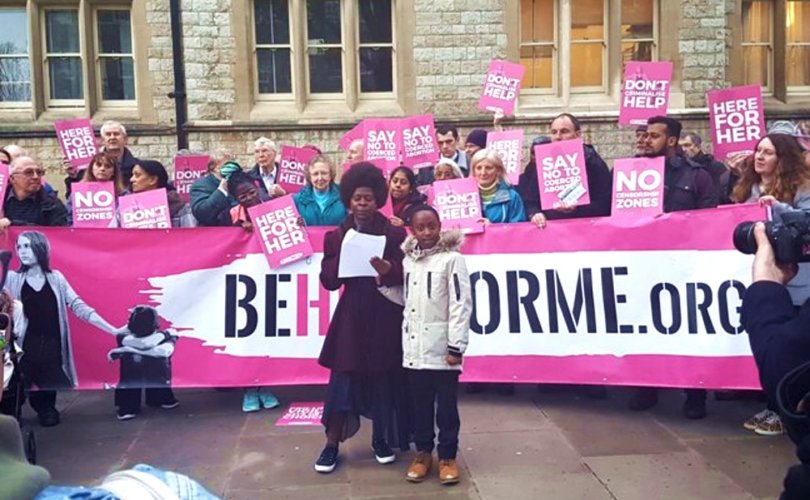 Outside Ealing Town Hall, Betty tells the story of how pro-life counsellors gave her the help she needed to keep her son, who is now nine. April 10, 2018. SPUC

LONDON, England, April 11, 2018 (LifeSiteNews) – A London council voted unanimously on Tuesday to ban pro-life vigils outside a local abortion center that have been taking place without incident for 23 years.

Last night the Ealing council (local government) voted to use a Public Space Protection Order (PSPO) to stop pro-life advocates from praying outside the Ealing Marie Stopes abortion clinic and offering help to women as they enter or exit the building. Pro-lifers must now stay 100 meters away from the abortion center.

Controversial in themselves, PSPOs allow councils to restrict legal activities within a specified area. Critics like the National Council for Civil Liberties say that PSPOs “criminalize non-criminal activity” and are used to limit freedom of speech and of protest.

There has been a pro-life presence outside the Ealing Marie Stopes clinic for over twenty-three years. Clare McCullough of the pro-life Good Counsel Network told LifeSiteNews last October that pro-life volunteers have been there six days a week since 2013. Her group offers women alternatives to abortion, sometimes housing and feeding women who have no-one else to turn to. McCullough told BBC Radio 4 this week that over 500 women have accepted help from the Good Counsel Network.

McCullough told LifeSiteNews that the atmosphere outside the clinic was entirely peaceful until the pro-abortion activist group Sister Supporter arrived on the scene two years ago.

Sister Supporter, which has the backing of local MP Rupa Huq, has been noisily protesting the quiet pro-life presence since 2016. Some of its members were at Ealing town hall yesterday evening to ensure the Council banned pro-life free speech. One witness said they treated women who had been helped by pro-lifers with contempt.

“One of the terrible things about last night was seeing the white middle-class women try to boo, heckle and shout down immigrant women of colour from giving their testimony about how they were able to keep their babies,” tweeted pro-life Caroline Farrow. “Some women are more equal than others.”

“The most moving part of the … meeting was when Betty, a young mum who had been able to keep her baby thanks to the help and support offered, spontaneously threw herself on her knees and pleaded for the vigil to be able to stay and help other women like her.”

When the voting results were announced, the Sister Supporters burst into applause. Their founder Veglio-White made a statement saying that “Free speech is a qualified right; it is not an absolute given, and it has never superseded women’s right to anonymity.”

“It was an extremely poignant and tear-jerking moment. I can only describe it as being like standing at the foot of the cross,” she said.

The mothers helped by the Ealing pro-lifers held a rally outside the town hall. They were addressed by Alithea Williams of the Society for the Protection of the Unborn (SPUC).

“This is a bad day for democracy in the UK,” she said. “For the first time, a council has banned peaceful public acts of witness and freedom of expression.”

Williams suggested that banning the pro-lifers went against basic freedoms and human rights in the UK to such an extent that it was “vulnerable to a legal challenge.”

“What is most shocking is that a Council has voted to stop members of the public offering charitable help to vulnerable women,” Williams said.

She added that the women who had spoken out about the help they had received from the Good Counsel Network are “devastated” that alternatives to abortion were now going to be denied to other women. Now women are “at the mercy” of such disreputable businesses as Marie Stopes.

“This is … bad news for women as it leaves them at the mercy of the abortion industry,” Williams said. “Marie Stopes has an appalling record when it comes to patient care and safety – as is shown by the series of Care Quality Commission reports severely censuring them for a catalogue of abuses and safety violations, as well as a 'culture that worked against patient choice.'”

“Is the ‘choice’ offered by this organisation really the only one Ealing Council wants to be available to women?” she added.

The PSPO ban comes into effect on April 23. It will be reviewed after six months. However, it has already had a chilling effect on the pro-life witness outside Marie Stopes Ealing. Today, the day after the meeting, a male passerby attacked a pro-life witness named Andrea stationed outside the clinic.

“Thanks to last night’s decision a woman volunteer on the vigil in Ealing has been attacked by a male passer-by,” tweeted Caroline Farrow.

“First time in over 20 years the public feel empowered to be violent,” she noted.