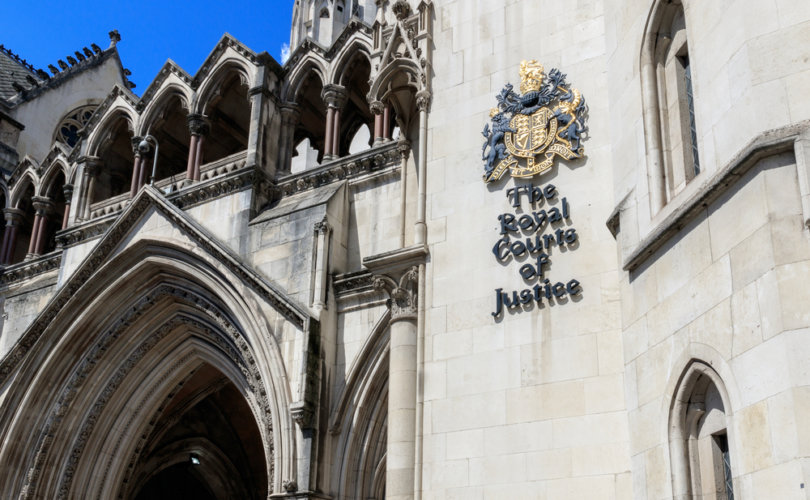 (LifeSiteNews) – The U.K. Court of Appeal has intervened in the case of a baby who started to breathe weeks after being diagnosed “brain stem dead” by doctors at a London hospital, challenging a previous High Court ruling which allowed the hospital to remove life support from the infant against the parents’ wishes.

The parents of the child, a 5-month-old boy known only as Baby A due to court reporting restrictions, are now engaged in a fierce court battle for his life, opposing the argument of both the hospital and the High Court that it is in their son’s “best interests” to be removed from mechanical ventilation, an act which could lead directly to his death.

However, despite multiple attempts, the parents have been unable to secure appropriate legal representation.

After High Court judge Justice Hayden ruled last month that medical staff at the Guy’s and St. Thomas’ NHS Foundation Trust could remove life support from the baby, denying a request for adjournment, the parents submitted a desperate plea to the Court of Appeal on the grounds that, having had no consistent legal counsel, they had received an unfair hearing.

The challenge was upheld on September 9 by three judges, who stated that the representation had been lost “through no fault of their own” and ordered that a new trial commence in a matter of weeks, with Justice Poole due to reconsider the arguments for sustaining life-saving treatment for Baby A presented at the initial hearing.

Writing in the September 9 decision, Justice Baker stated that Hayden was wrong to refuse the parents an adjournment, arguing that “there were plainly a number of strong arguments in favor” of granting the request, including that the parents had lost their legal representation just a few days before the crucial hearing was due to take place.

Owing to a failed application for legal aid, and without the personal means to pay themselves, lawyers at Irwin Mitchell dropped the case, leaving the parents without representation.

“Some parents may choose to represent themselves from the outset and only decide to seek legal representation at the last minute. Others may instruct lawyers and then withdraw those instructions and seek an adjournment. In those circumstances, there is obviously less merit in the adjournment application. In this case, the parents had wanted to be represented at all times,” Baker stressed.

He added that the parents’ “contributions were limited to the cross-examination of one witness and the giving of unsworn evidence. Their case was not as central to the hearing as it would have been had they been represented.”

Accordingly, the court ruled “[in] the circumstances… the judge’s decision to refuse the adjournment was unfair and must be set aside.”

“We would hope that legal representation can be obtained, if necessary on a pro bono basis, to enable the substantive hearing to take place in the next two weeks,” the judges added.

The parents, a Muslim couple of Bangladeshi origin, had represented themselves in their initial hearing with Hayden, where they argued against the prognosis of numerous doctors that their son would not recover from injuries leading to a cardiac arrest on June 10.

The boy was brought to the emergency department of the Queen Elizabeth Hospital (QEH) soon after he sustained the cardiac arrest, regaining circulatory function around 30 minutes later. In the following days, doctors performed three brain stem tests on the infant, one of which elicited a “hiccup.” However, after two other failed brain stem tests, doctors declared him “brain stem dead” on June 19.

Around two weeks later, on July 2, a “very experienced and entirely suitably cautious nurse” noticed Baby A attempting to breathe “notwithstanding that A’s death had been ascertained and recorded,” court records show. “She believed that she had seen [Baby A] both move and attempt to breathe.”

Subsequently a doctor, “Dr. Z,” investigated the claim, discovering that Baby A was breathing despite having been declared “brain dead.” Dr. Z reported that Baby A “has consistent shallow irregular breathing when disconnected from the ventilator for short periods of time,” adding that “[i]ntermittent larger breaths result in extensor movement of head and neck en masse.”

Accordingly, the “clinical diagnosis of brain death was immediately rescinded.”

Speaking to LifeSiteNews in August, Baby A’s father said the doctors confirmed that “nothing like this has happened in the history of the U.K.,” adding the judge’s comments that the chain of events following his son’s recovery represent an “unprecedented situation” and “unknown territory.”

Both the father and mother see what has happened to their son as “a miracle.”

Doctors at the hearing affirmed that “A’s heart is strong and there is no particular reason to believe that resuscitation would be unsuccessful,” leading the court to reconvene a few weeks later to hear expert testimony.

Doctors again recounted the “unprecedented” nature of Baby A’s recovery, prompting Hayden to state that the circumstances have been “striking even for those of us experienced in these cases” and thus describe brain stem testing as “unreliable.”

Although admitting of the uncharted territory regarding Baby A’s recovery, some doctors also testified that his condition would likely not improve.

Ultimately, Hayden refused the parents’ request for adjournment on the basis that proceedings had already been underway for a month and granted legal authorization to the hospital to remove life support from the infant, arguing that “continued ventilation will serve here only to protract death.”

The Court of Appeal rejected the foundation of Hayden’s denial of adjournment, arguing that “the points made by the judge about the parents’ case in his explanation of his reasons for refusing the adjournment should have carried significant weight.”

While the judges heard that Baby A had suffered “devastating” brain injuries, Justice Baker wrote that the “fact that on paper the medical evidence all seems to point one way does not mean that the parents should not have an opportunity to challenge it.”

The result of Justice Poole’s re-examination of the case is still pending.

In order to help Baby A’s parents secure legal representation and continue to fight the courts for the life of their son, please consider donating to their LifeFunder campaign today.