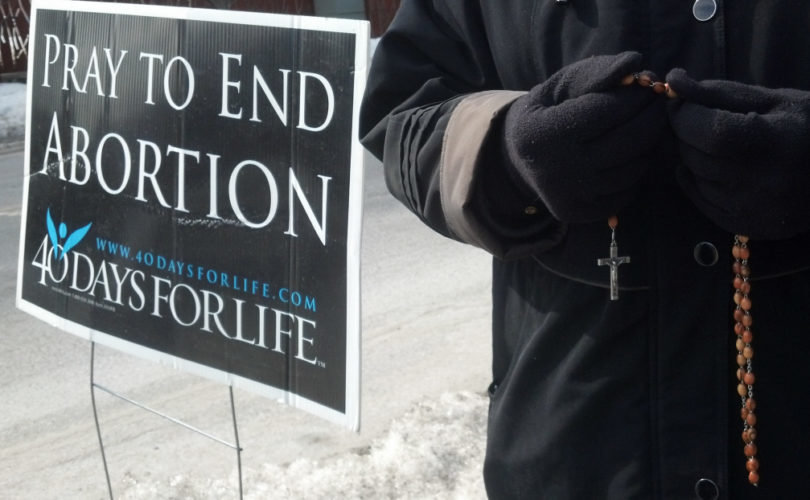 In April 2018, the High Court upheld the ban, the Public Spaces Protection Order (PSPO), which was implemented by a London local council.

The activist seeking permission to appeal the ordinance is Alina Dulgheriu, whose baby was saved by pro-life sidewalk counselors in 2011. Dulgheriu now participates in pro-life vigils herself.

The Ealing PSPO criminalises prayer, offering of support, and any act of disapproval regarding abortion outside of the Mattock Lane abortion clinic in Ealing, West London.

In reaching its ruling, the High Court in London accepted that Dulgheriu’s rights to freedom of expression, freedom of religion, and freedom of assembly had been infringed by Ealing Council’s PSPO. Nevertheless, it decided to uphold the PSPO and dismiss the legal challenge against it.

“I have sought permission to appeal the High Court decision because I believe the law has been misapplied and has allowed for the unjust criminalization of offers of support and silent prayer,” Dulgheriu said today. “This judgment will have devastating ramifications for hundreds of women and for society at large if it is allowed to stand.”

Subsequent to the High Court decision, Dulgheriu launched a crowdfunding campaign to raise £50,000 ($38,000) to fund a further legal challenge. In less than two weeks, she has raised over £20,000 ($15,000). Dulgheriu is determined to continue her fight in the courts.

Filing for permission to appeal “simply would have not been possible without the incredible support of over 400 people who have donated on the crowdfunding page,” she said. “I am so grateful for their generous support.”

Reflecting on her own personal experiences, Dulgheriu commented, “I know how devastating the effect of this judgment will be because I received a loving offer of support when I needed it most, when I thought I had no other alternative. Without this simple offer, I would not have my beautiful [six-year-old] daughter today. Since then, I have been privileged to join a compassionate, loving group of citizens who offer this same help to mothers in similar circumstances.”

The High Court’s decision in April 2018 has significant national implications for freedom of speech. Any further legal appeal would seek to ensure that local councils cannot ban vigils from offering much-needed support to women, many of whom feel as though they have no option other than abortion.

As Dulgheriu pointed out, “Fundamental human rights, such as freedom of expression, the right to pray, and the right to receive information have been undermined [by the Ealing PSPO]. How can we, as a society that recognises the value of these fundamental rights, allow this to happen?”

Dulgheriu hopes the Court of Appeal will recognise that the earlier court ruling has criminalized “offers of help on the basis of evidence that the High Court recognised was not of a criminal standard.”

She is hoping that eventually the Court of Appeal will strike down the PSPO “for the sake of the vulnerable women who now will not be able to access the loving help I did, and for the sake of the fundamental freedoms that our society holds so dear.”