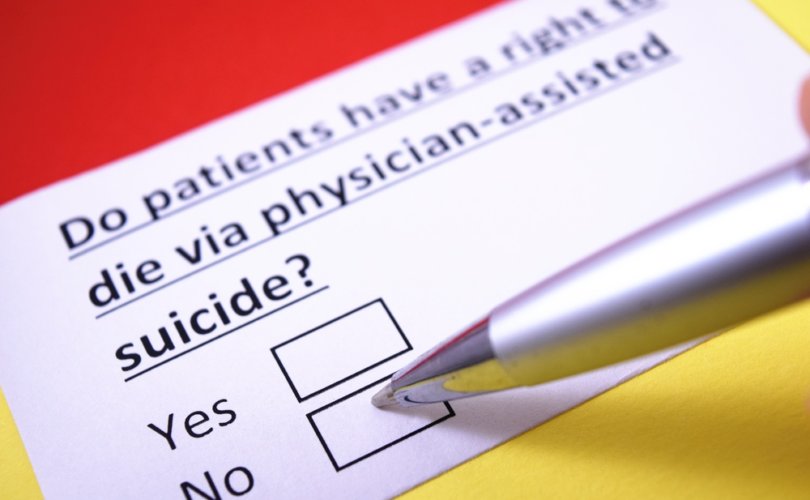 LONDON, June 29, 2018 (LifeSiteNews) – The Court of Appeal has rejected an attempt to change the law on assisted suicide through the courts.

In a case brought by terminally-ill motor-neurone-disease sufferer Noel Conway, it was argued by his legal team that the current blanket ban on assisted suicide under the Suicide Act 1961 is incompatible with his human rights as set out in Article 8 of the European Convention on Human Rights.

In a judgement issued on 26 June 2018, the Court of Appeal has upheld earlier judgements in the case and ruled that the ban on assisted suicide achieves a fair balance between the interests of the wider community and the interests of people such as Mr Conway.

It went on to make clear that the objectives of this ban are not limited to the protection of the weak and vulnerable, but also include respect for the sanctity of life and the promotion of trust between patient and doctor in the care relationship.

“The moral and ethical issues that arise when the principle of sanctity of life rubs up against the principle of personal autonomy are not only to be found in the issue of the ban against assisted suicide and euthanasia. They are also reflected in the drawing of the line between when consent is and is not a defence to wounding or the infliction of actual bodily harm or grievous bodily harm […] Here, again, our law has imposed a limit on personal autonomy to reflect wider moral, ethical and practical issues which include, but are not limited to, the protection of the weak and vulnerable,” the ruling stated.

Only last year, at a lower court, in an earlier judgement in the same case, judges had dismissed the case, saying:

'It is legitimate in this area for the legislature to seek to lay down clear and defensible standards in order to provide guidance for society, to avoid distressing and difficult disputes at the end of life and to avoid creating a slippery slope leading to incremental expansion over time of the categories of people to whom similar assistance for suicide might have to [be] provided… we find that section 2 (right to life) is compatible with the Article 8 rights (private and family life) of Mr Conway. We dismiss his application for a declaration of incompatibility.'

Since 2003, the British Parliament has seen ten attempts to change the law on assisted suicide. All have failed. The most recent in 2015 was defeated by a majority of MPs by 330 to 118 votes.

At that time Members of Parliament, supported by medical and disability rights groups, expressed concerns about public safety, as well as pointing to the failure of safeguards in the few jurisdictions that have assisted suicide or euthanasia. MPs were also concerned about the discriminatory message Parliament would send by removing universal protections from the sick, elderly and dying.

Increasingly in recent years, groups calling for changes to the current law on assisted suicide have turned to the courts as a way of changing existing laws. In this latest judgement the Court of Appeal stated: ‘The Court is of the view that Parliament is a far better body for determining [this] difficult policy issue in relation to assisted suicide.’

Care Not Killing, a UK-based alliance against assisted suicide while promoting better palliative care, welcomed the Court of Appeal's decision to uphold the earlier decision of the lower court and, by so doing, rejected this latest attempt to legalise assisted suicide.

'This sensible decision by the Court of Appeal yet again recognises that the safest law is the one we already have – a complete ban on assisted suicide and euthanasia. Our laws deter the exploitation, abuse and coercion of vulnerable people, who as we have seen in the US States of Oregon and Washington often cite feeling they have become a financial, or care burden as the reason for ending their lives’.

Saunders went on to add: 'While there are those who argue that feeling that you are a burden on others is reason enough to seek help to kill yourself, it is this sort of chilling and regressive view that led Paralympian Baroness Grey-Thompson to warn that vulnerable and disabled people risked being collateral damage, if the law were to be changed. This view is echoed by the British Medical Association, the Association of Palliative Medicine, the Royal Colleges and Care Not Killing’.

Saunders urged those who had taken the case to court to ‘move on’ saying: 'We hope that those who have been campaigning to remove these important and universal protections from the disabled and infirm accept this ruling. It is now time for them to move on and turn their attention instead to how we can secure equality of access to the very best health care for all. This must include palliative care and mental health support, because we know when the physical, psychological and spiritual needs of patients are met, there is no pressure for change.'

The man at the centre of this court case, Noel Conway, is a member of Humanists UK, a group campaigning for a more secular state, and is being supported by pro-assisted suicide group Dignity in Dying. On hearing this latest court judgement, Mr Conway announced his intention to appeal it.