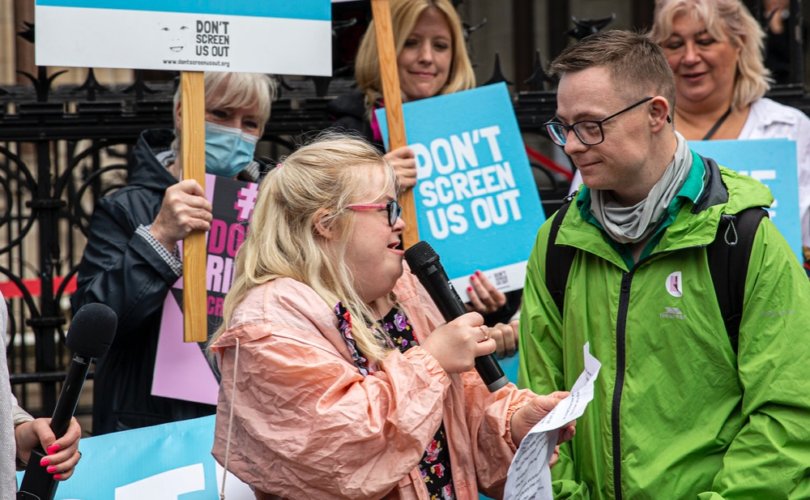 Heidi Crowter and her husband James CarterDon't Screen Us Out/Flickr

LONDON, England (LifeSiteNews) – A young woman with Down Syndrome says she will take her case to the United Kingdom’s Court of Appeal after the High Court rejected her challenge to the current abortion law.

The British Abortion Act 1967 permits babies with Down Syndrome to be aborted until birth.

Crowter was joined in the legal challenge by Máire Lea-Wilson, whose two-year-old son also has the chromosomal condition.

Heidi Crowter is a self-advocate who has campaigned for the last five years for equal treatment for those with Down Syndrome in all areas of life. She was married last summer to James Carter, who also has Down Syndrome. Máire Lea-Wilson, a 33-year-old accountant, was placed under pressure to have an abortion when a 34-week scan revealed her son had Down Syndrome.

Currently, the British Abortion Act 1967 prohibits abortion after 24 weeks unless “there is a substantial risk that if the child were born it would suffer from such physical or mental abnormalities as to be seriously handicapped.” In such a case, the child can be killed right up until birth.

“What it says to me is that my life just isn’t as valuable as others, and I don’t think that’s right,” Crowter has said of the current law. “I think it’s downright discrimination!”

Crowter and Lea-Wilson’s case was presented during a two day court hearing in July, during which their legal team argued that the abortion laws were unlawfully discriminatory and not compatible with the European Convention on Human Rights.

However, today’s decision by Lord Justice Singh and Mrs Justice Lieven upheld the current abortion laws, deeming them to be lawful.

“The issues which have given rise to this claim are highly sensitive and sometimes controversial,” the Justices stated.

“They generate strong feelings, on all sides of the debate, including sincere differences of view about ethical and religious matters. This court cannot enter into those controversies; it must decide the case only in accordance with the law.”

‘The fight is not over’

Both Crowter and Lea-Wilson, who were supported in their case by the Church of England’s Archbishop of York, spoke to the media outside the High Court following today’s decision, declaring that they would continue their fight for the rights of the unborn.

Crowter’s fundraising page is still open, as the legal team is now gathering the funds to take the case to the Court of Appeals.

“I am really upset not to win but the fight is not over,” said Crowter.

“We face discrimination every day in schools, in the work place and in society. And now thanks to this verdict, the judges have upheld discrimination in the womb too. This is a very sad day, but I will keep fighting. I am not giving up! Let’s do this!!”

“I want to change the law and I want to challenge people’s perception of Down’s Syndrome. I want them to look at me and say ‘This is just a normal person’,” continued Crowter.

“That’s what this is about. It’s about telling people that we’re just humans with feelings.”

Lea-Wilson also criticized the High Court’s decision, stating that it “effectively says that my two sons are not viewed as equals in the eyes of the law, and I am incredibly sad and disappointed that the court has chosen not to recognize the value and worth of people with Down Syndrome, like my son Aidan.”

Stating that the COVID-era had shone a light on the “dangerous and deadly consequences” of discrimination against people with Down Syndrome, Lea-Wilson declared the ruling “condones discrimination, by cementing the belief in society that their lives are not as valuable as the lives of people without disabilities.”

“The judgement also gives very little consideration to the fact that many women, like myself, are pressured to abort much wanted pregnancies at such a late stage in the context of fear and misinformation which is given to them,” the mother continued.

“I do not regret bringing this case because I believe it has helped raise awareness around the wonderful lives people with Down Syndrome and their families lead, and helped dispel some of the negative, outdated, and prejudicial attitudes that are prevalent in society and the medical profession. As Aidan’s mother, I will continue to fight for his rights, and look to appeal this judgement, because equality should be for everyone regardless of the number of chromosomes they have.”

Both women were strongly supported by their legal team, one of whom observed that the “law sends a powerful message that the lives of people with Downs Syndrome are of lesser value.”

Following news of the ruling, disability campaigners were quick to show their support for Crowter and Lea-Wilson in their attempt to take their case to the Court of Appeals, and Crowter’s social media page has been flooded with messages of support.

Portsmouth Down Syndrome Association called it “a dark day for people with Down syndrome and learning disability,” adding “Shame on those upheld this outdated law and missed this vital opportunity to correct a gross injustice which stigmatizes and dehumanizes so many people.”

Right To Life UK also expressed their outrage at the decision, with spokeswoman Catherine Robinson saying there was a “clear display” of “discrimination against people with Down’s syndrome and other disabilities.”

“The law unambiguously says that their lives do not matter as much as others. Hopefully, the Court of Appeal will see the obvious that the High Court failed to see.”