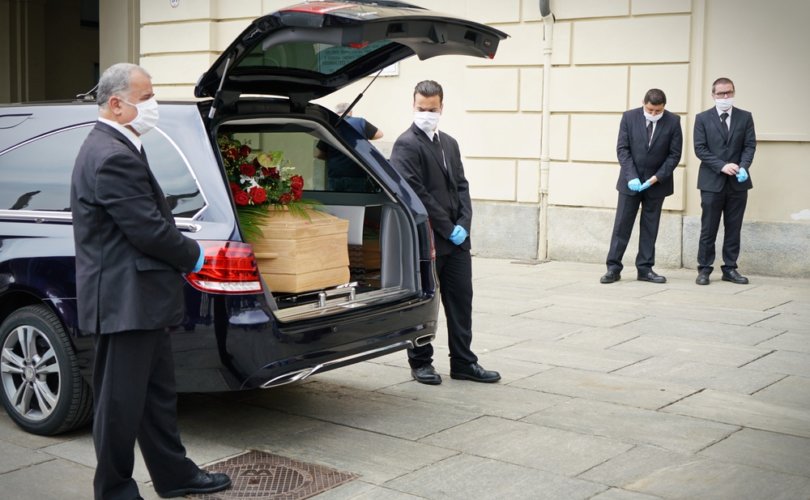 WESTMINSTER, U.K., March 11, 2021 (LifeSiteNews) – Statistics released in the U.K., reveal that a  significant amount of excess deaths have occurred at home since the start of COVID-19 lockdowns, whilst hospital mortality remained largely below average, suggesting that a lack of access to health services due to lockdown could be the cause.

Figures released Tuesday by the Office for National Statistics (ONS) in the U.K., provide an in-depth examination of the death toll which has occurred during the past year, and shed light on a little reported aspect of the COVID-19 lockdown measures. The data runs from March 7, 2020 and February 26, 2021. The UK’s lockdown commenced on March 23, 2020, with the first significant easing being on June 15, when “non-essential shops” were permitted to re-open.

From March 7, 2020 to February 26, 2021, a total of 50,810 excess deaths at home were recorded. 7,056 of those were reported to be due to COVID, leaving 43,754 deaths occurring at home which were “excess” or above the five-year average. After the first three weeks covered in the charts, all the remainder reported above average deaths, with only one week having less than 670 excess deaths reported as occurring at home.

Some may simply point to COVID-19 as the cause for these deaths, suggesting that with hospitals supposedly over-run and the spill over of patients unable to access hospitals, excess deaths at home naturally increased. However, a careful examination of the data does not support this hypothesis.

In weeks 14 to 18 of 2020, the first four weeks recorded in the figures, saw above average deaths occurring in hospitals, yet between weeks 19 to 42 (with the exception of week 20), hospital deaths were below average – often significantly below average. However, in the corresponding period excess deaths recorded at home remained considerably higher than average.

Monthly data also from the ONS, reveals that between January 2020 and January 2021, deaths were only above the 5-year average in March and April 2020, as well as from November 2020 to January 2021. Yet, starting from February 2020, deaths occurring at home have remained significantly above average, despite the time from May to October 2020 when deaths in hospitals were below average.

In addition to this, data from the National Health Service (NHS), presents a more rounded picture than the death statistics.  The occupancy rate of adult critical care beds across England was only 70.7% in March 2020 and steadily dropped to 50% occupancy in May, despite these months being during the “first spike” of COVID-19, when U.K. residents were ordered to remain at home in order to save the NHS from the ravages of a deadly infection.

Another instance of data undermining the rationale for lockdowns can be found in January 2021. During the recent “peak” of cases and deaths which took place in the third week of January, there were only two days in the entire month when there were slightly less than 10,000 general and acute beds unoccupied across English hospitals, out of a normal average of 92,000 beds available. This is in stark contrast to January 2020, when there were consistently about half as many beds available each day.

Yet, despite this actual lack of pressure on the hospital bed system during a supposed wave of infections, people were ordered to remain at home, and deaths occurring at home remained 24% above the 5-year average.

In fact, in a ground-breaking interview back in October 2020, Lockdown Sceptics journalist Gavin Phillips interviewed a veteran registered nurse in a large U.K. hospital, who revealed that even though the height of the “pandemic” occurred in April, from April to August the hospital was “extremely empty.”

“Bays that were normally full were completely empty,” the nurse added, “On several occasions I have had no patients at all for an entire 12-hour shift.” Nor was her experience isolated, as she spoke to colleagues in different hospitals, who “all agree that hospitals have been empty.”

Did lockdown effectively cancel healthcare and lead to deaths?

One very probable explanation for the excess home deaths, is the complete inability of people to access health care due to the lockdown itself, or the fear which they had about leaving home and seeking care.

Writing for Lockdown Sceptics, Will Jones made this correlation, pointing to the “NHS waiting list of millions” which resulted from lockdown, “as people have stayed away from hospital to ‘protect the NHS’ and out of fear of catching Covid. The most immediate cost of this can be seen in non-Covid excess deaths from denial of healthcare, especially at home.”

According to a Daily Mail report from earlier this year, last spring over 27 million GP appointments were “lost.” Surveys found that when people did try to arrange appointments, over half of patients found it more difficult to obtain an appointment, either in person or on the phone. NHS figures showed that in July 2020 there was an 85% decrease in GP appointments compared to July 2019.

— Article continues below Petition —
PETITION: No to government and corporate penalties for refusing COVID-19 vaccine
Show Petition Text
103104 have signed the petition.
Let's get to 125000!
Thank you for signing this petition!
Add your signature:
Show Petition Text

Indeed, cancer treatment “plummeted” last year, whilst U.K. medical journal The Lancet predicted some 3,600 deaths in the next five years, due to cancer left untreated thanks to restrictions imposed on the health service. Furthermore, since the arrival of the experimental vaccines, doctors have been told to “stand down” normal activities, so as to prioritise the vaccine roll out.

A staggering 4.6 million people were awaiting treatment from the NHS at the end of January 2021 – the highest number ever recorded. Patients who had waited over a year numbered 304,044, compared to just 1,643 in January 2020.

The anonymous nurse interviewed by Lockdown Sceptics explained these facts by shedding light on the state of hospitals last year. She noted how staff were told to “limit the amount of care given to patients,” and doctors “paid much less attention to all other health conditions.”

“This hospital formula in response to the alleged Covid pandemic I believe is a direct link to increased deaths,” she added. “We must also not forget the patients who have been denied healthcare for many months. The many, many patients that have been unable to access services, outpatient clinics were no longer open, a crucial service of reassurance and possible detection of changes to their health conditions.”

Clearly then, by examining the actual data, the message to stay home and save the health service, has been so widely accepted, that people are dying at home and will increasingly do so, due to lockdown measures. With home deaths being so constantly in excess, even while hospital death toll is low and free bed capacity is high, the explanation for these deaths would seem to be found in the lockdown itself and the lack of access to health care.