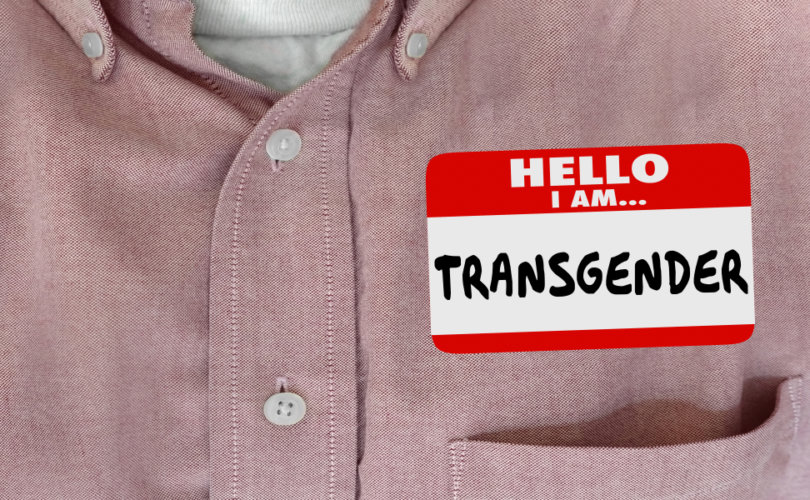 October 22, 2018 (LifeSiteNews) – Unconditionally recognizing whatever gender an individual claims to be would be a “dangerous” change to the status quo, a group of Christian medical professionals is warning the United Kingdom.

The UK’s government is currently considering a proposal to let-gender-confused people change their legal gender without a medical diagnosis. Currently, the law requires such requests to have two medical reports, documentation proving someone has lived in their claimed “identity” for at least two years, and a fee.

The government claims the policy wouldn’t force sex-specific services or facilities to accept transgender members of the opposite sex, but supporters and opponents are both unconvinced.

Regardless, the UK-based Christian Medical Fellowship (CMF) submitted a statement by Dr. Rick Thomas to the government on Friday raising multiple objections to the plan. CMF represents more than 4,000 doctors and approximately 800 medical students in the UK.

While agreeing that some change to the status quo is called for, Thomas argued that self-declaration “would be harmful for individuals, their families and society as a whole,” by making gender identity “simply a matter of a person’s subjective feelings about themselves.” This “new ideological dogma” that sex is nothing more than a “social construct” has “no evidence-base in science,” he said.

“It is clear from a recent Australian study that gender dysphoria in young people is often accompanied by mental health disorders such as anxiety and depression, including attempted suicide. According to trans activists this is due simply to ‘minority stress’ resulting from society’s negative attitudes towards trans people, a claim without supportive evidence,” Thomas continued. Further, there is “no proof that radical therapies such as puberty-blocking drugs, double mastectomies and cross-sex hormone treatment will prevent adolescents from attempting suicide.”

He cited recent research indicating a phenomenon dubbed “rapid-onset gender dysphoria,” in which teens decide they’re transgendered based in large part on outside peer pressure and other mental health disorders.

“The same caution is needed in treating adults with gender dysphoria. The largest study following adults who have undergone medical gender transition was conducted in Sweden,” Thomas went on. “Thirty years after their transition, the suicide rate was 19 times higher among transgender adults than among the nontransgender population. It is clear that these results do not support the alleged curative effects of transition.”

The statement says that government approval of gender changes should continue to require a medical diagnosis of gender dysphoria, documentation of past treatment, and a signed declaration that the patient intends for the change to be permanent.

“There is a real risk that people who require psychological support and specialised psychiatric treatment would not receive it,” especially teens “struggling with the turbulent effects of puberty, social transition and identity issues in general,” CMF chief executive Dr. Peter Saunders said, according to Independent Catholic News. “Pursuing legal gender transition may harmfully distract a young person from addressing psychological issues such as anxiety and depression that may complicate gender dysphoria or even be at the root of it, with the help and support of mental health professionals and others.”

Saunders warned that while the desire to remove needless burdens is commendable, “removing sensible 'barriers' to overly-easy transition will result in more people embarking on early medical transition with insufficient thought, more people living to regret irreversible changes to their bodies and an overall increase in co-morbid mental health issues including suicide.”

Concern over the UK’s transgender policy is further heightened by high-profile scandals such as the National Health Service assigning a male trans nurse to a woman who had requested a female nurse for her pap smear, locking a bipolar patient with a fear of men in a psych ward with an “extremely male-bodied” transgender patient, and housing a biologically-male rapist with female inmates, whom he subsequently assaulted.