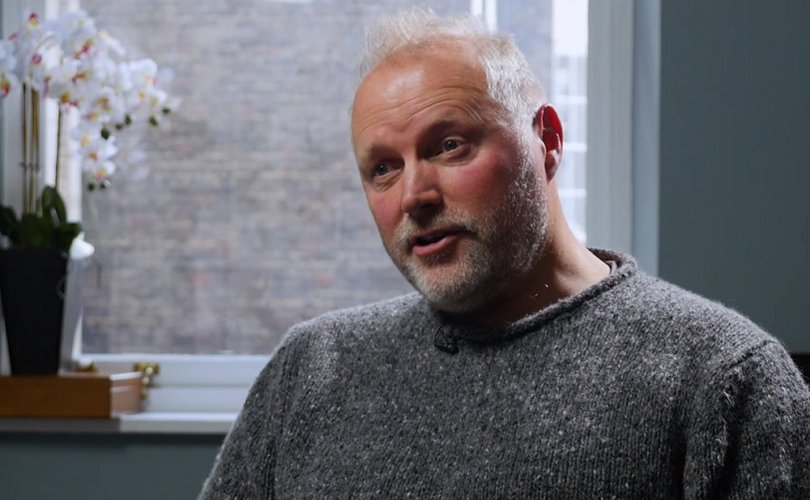 LONDON, November 21, 2019 (LifeSiteNews) ― A father of four has taken England’s police association and his own local police force to court after he was investigated by them for “hate speech” because he posted comments to social media questioning the LGBT claim that a man could become female through hormones and surgery.

Harry Miller, 54, a former police officer from Lincoln, is the founder of “Fair Cop”, an organization devoted to ensuring that British police respect free speech. He was in the Westminster High Court today, the second day of a Judicial Review into the use of transgender-influenced “guidance” — i.e. guidelines, by the College of Policing and Humberside Police.

According to Lincolnshire Live, Miller’s lawyer, Ian Wise QC, said yesterday that his client is “deeply concerned” about proposed reforms to the law on gender recognition and had used Twitter to “engage in debate about transgender issues.”

Wise argued that Humberside Police, using the College of Policing’s guidance, had tried to “dissuade” Miller from expressing his opinion on the topic in future. This, Wise said, was  “contrary to his fundamental right to freedom of expression.”

The lawyer added that Miller “has never expressed hatred towards the transgender community, or sought to incite such hatred in others, and has simply questioned (at times provocatively and using humour) the belief that trans women are women and should be treated as such for all purposes.”

However, Jonathan Auburn, the lawyer for the College of Policing, argued that it was “not beyond reason that a transgender person reading [Miller’s] messages would consider them to be motivated by a hostility or prejudice against a person who is transgender.”

Auburn also maintained that the guidance regarding hate incidents is lawful and does not violate Miller’s freedom of expression.

Mr Justice Julian Knowles is now taking time to consider his decision and hopes to hand down a judgment before Christmas.

Miller was contacted by a “community cohesion officer” this January after someone made a complaint to police about messages Miller had posted or shared on Twitter that were critical of transgender ideology.

The complaint was marked down as a “hate incident,” which is now permanently on record.

“The reason that we went to court was because I discovered that, one, I had been defamed without any evidence and, two, that this ‘hate incident’ was now a fixed instance in the records of Humberside Police,” Miller told legal advocacy group Christian Concern.

“The thing about the hate incident is that the College of Police guidelines say that no evidence is required. None. So if a third party perceives it as being hateful, it’s hateful, that’s it.”

According to Lincolnshire Live, the guidance on “hate incidents” defines them as “any non-crime incident which is perceived, by the victim or any other person, to be motivated by a hostility or prejudice against a person who is transgender or perceived to be transgender.”

In his presentation to Christian Concern, Miller observed that there is then nothing the person accused of ‘hate’ can do to expunge the record of the non-crime. He noted that when he looked at the police’s incident report, it said “CRIME REPORT in big letters” and listed the “offence” as “hate.” Miller is concerned that potential employers of people who are accused of ‘hate incidents’ will find the records while doing an advanced police check, see the words “crime”, “offence”, and “hate” and treat the potential employees as if they actually had a criminal record.

“What’s happened here is [that] the College of Policing and the police forces in England and Wales have adopted guidance as if it were law,” he said.

“And if you ask for the underpinning law to their guidance, they simply give you the guidance because they conflate law with guidance,” Miller continued.

“We’re saying that’s not right, in particular the paragraphs that require no evidence…The perception-based reporting that does not require any evidence whatsoever — that bit has to go.”

Miller says the 30 tweets that got him into hot water were mostly remarks or questions casting doubt on trangender ideology, such as whether a rape committed by a man who identified as a woman would be recorded as a male or female crime.

Although Miller had not used his surname or mentioned his workplace on Twitter, the complainant told Humberside Police where the plant and machinery dealer worked and included in his complaint a concern that the business was an “unsafe environment” for transgender people. Miller’s managing director informed Miller that the police had contacted them.

When Miller spoke to Police Constable (PC) Mansoor Gul, the community cohesion officer cited Miller’s tweets. Gul mentioned in particular a verse Miller had retweeted that cast doubt on the idea that a man could become a woman through breast implants and genital surgery. Gul then shared with Miller what he had been told in a transgender training lesson.

“I’ve been on a course and what you need to understand is that you can have a fetus with a female brain that grows male body parts and that’s what transgender person is,” Miller said Gul told him.

When PC Gul admitted that none of the tweets were criminal, Miller asked him why he had phoned him. He says that Gul replied, “I need to check your thinking.”

Gul denies having said, “I need to check your thinking”, but Miller says that this “misrepresentation” is irrelevant.

Meanwhile, PC Gul stated that although Miller had not committed a crime, his tweets would be recorded as a “hate incident.”

PC Gul confirmed with the Daily Telegraph that he had had a twenty-minute conversation with Miller and had indeed made the remark about the female-brained fetus, something he had learned “on a training course run by a transgender person last summer.”

The Humberside community cohesion officer added: “Although none of the tweets were criminal, I said to Mr Miller that the limerick [sic] is the kind of thing that upsets the transgender community. I warned him that if it escalates we will have to take further action. If someone comes forward and says: ‘I’m the victim of a hate incident and it’s really upsetting me’, then we have to investigate”.

Miller told LifeSiteNews yesterday that the College of Policing had been “captured” by LGBT advocacy group Stonewall. He said also that the online and offline stalking and harassment of CitizenGO U.K.’s Caroline Farrow was “absolutely shocking.”

Farrow, too, has been contacted by police over her thoughts on the transgender issue. A transgender activist complained to law enforcement because Farrrow allegedly “misgendered” her son, a boy who underwent so-called “sex change” surgery at the age of 16. Susie Green, the CEO of transgender advocacy group Mermaids, later dropped the complaint.

However, Farrow discovered this Tuesday at London’s Gatwick airport that, although she has no criminal record and has never even been arrested, her pre-approval for entering the USA had been cancelled. No explanation was offered.