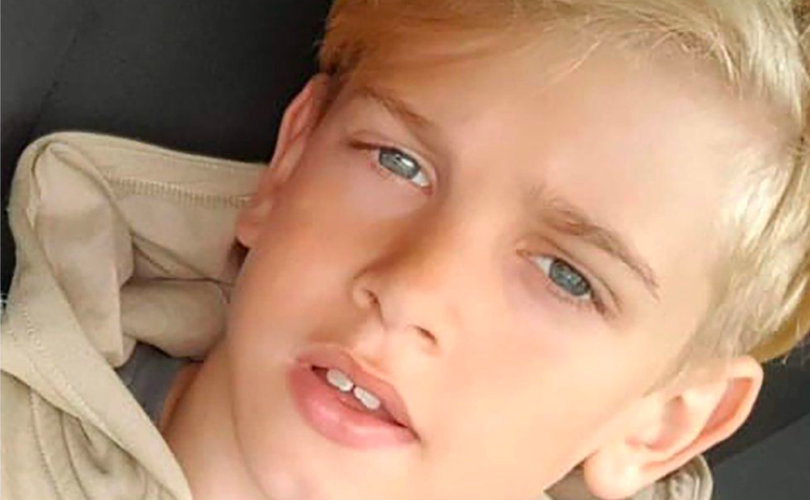 LONDON, UK (LifeSiteNews) — A High Court judge in the U.K. has ruled that doctors can stop providing life-support to a 12-year-old boy, stating that it would be in his “best interests.”

In a 16-page ruling delivered Friday morning, High Court Justice Anthony Paul Hayden ordered that medics can lawfully end providing life support to 12-year-old Archie Battersbee, who has remained unconscious after he was found in that condition by his mother on April 7.

Hayden ruled that it was “inevitable that neurocritical care interventions will eventually fail,” but admitted that “[h]ow, when and in what circumstances is impossible to predict.”

Justice Hayden has a long-standing record in favor of removing life-support, notoriously being the judge who ruled that 23-month-old Alfie Evans have his life support removed, leading to the tragic death of the young boy.

Hayden always rules in favor of doctors against parentshttps://t.co/MEUglGZVDV

Background to Archie’ fight for life

On April 7, Archie was found unconscious with a ligature around his neck, in what his mother believes to have been a prop for a social media challenge known as the “blackout challenge.” They had asked hospital bosses and the courts for Archie to be given more time before life support was withdrawn, and for him to have more medical tests to assess whether his condition improves before making the decision about withdrawing his life support.

Yet, doctors for the Royal London Hospital argued that it was “highly likely” that Archie is already “brain dead.” After lobbying from the doctors that it was in the boy’s “best interests” to die, the Family Division of the High Court then ruled June 13 that his life support be removed.

Supported by the Christian Legal Centre, Archie’s parents Hollie Dance and Paul Battersbee appealed the decision, and the Court of Appeals then overturned the High Court ruling.

The case was returned to the High Court for a second hearing on July 11, with the decision from that delivered July 15.

Hayden’s ruling out of concern for Archie’s ‘wishes’

Prefacing his death ruling, Justice Hayden declared it had been a “privilege” to examine Archie’s case.

Drawing together these conclusions led the Guardian to the view that it would not be in Archie’s best interests for treatment to continue. The Guardian is required, as I have been, to confront the appalling realities of Archie’s situation.

“There can be no hope at all of recovery,” he decreed. He explained away the family’s distress at the ruling as being irrational. “When it comes to evaluating the medical evidence, they have been ambushed by their emotions and overwhelmed by an intensity of grief that has compromised their objectivity.”

As such, he ordered that any continuation of life support would not be legally authorized, and that it was in fact “intrusive, burdensome and intensive”:

the treatment is futile, it compromises Archie’s dignity, deprives him of his autonomy, and becomes wholly inimical to his welfare. It serves only to protract his death, whilst being unable to prolong his life.

“It is important that I place him, his personality, his wishes, at the centre of this process,” Hayden stated. “Respect for Archie, as a person, involves a clear recognition that as a human being, he is more than the raft of medical complexity that I have set out above. He is not, in my judgement, simply who he is now, but he is also who he has been throughout his short life.”

However, despite being concerned with Archie’s “wishes,” he nevertheless highlighted a conversation presented by the family in evidence proving that Archie would not have wanted to have his life support removed. Hollie Dance recounted a conversation between Archie and his brother about what would happened should one of them be in a car crash and end up on life support. “I wouldn’t want to leave mum and I would try to get out of bed,” was Archie’s response.

Justice Hayden dismissed all grounds for the family to appeal. He ordered that arrangements be made to give “Archie the opportunity for him to die in peaceful circumstances and in the embrace of the family he loved.”

‘It is for God to decide’

Responding to the ruling, Archie’s mother hit back saying that “it is not in Archie’s best interests to die.”

Planned death is another name for euthanasia, which is illegal in this country.

It is for God to decide what should happen to Archie, including if, when and how he should die. As long as Archie is fighting for his life, I cannot betray him. Until Archie gives up, I won’t give up.

We will be appealing this ruling and we ask for your prayers and support.

Speaking to the press prior to the ruling, Archie’s father echoed these sentiments, saying “the most important thing for me is to know he has gone in God’s way.”

The Christian Legal Centre’s Chief executive Andrea Williams lamented the decision, but said “this is what we have come to expect from the courts in end-of-life cases.”

What Archie’s case has shown is that systematic reform is needed to protect the vulnerable and their families in end-of-life matters.

Archie’s case is the latest high-profile end of life case involving children following Alife Evans, Charlie Gard, Tafeeda Raqeeb, and Zainab Abbasi. In today’s ruling, Justice Hayden continues his past record, along with others from the Family Division of the High Court in ruling against parents and their children.