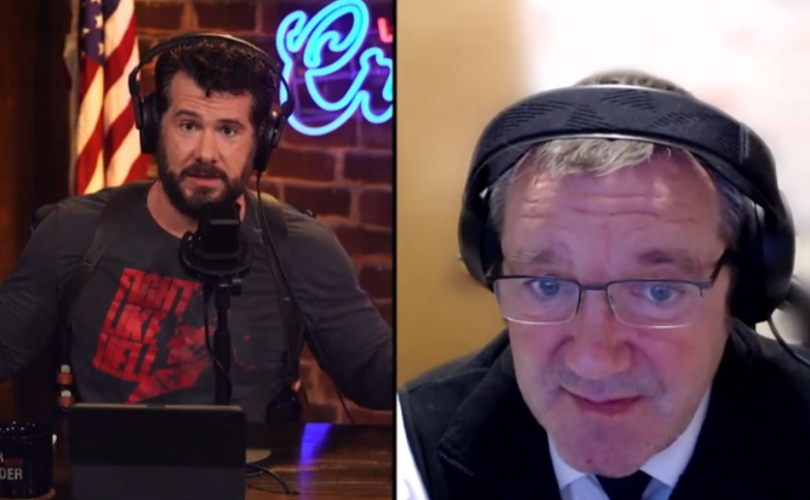 In the interview, O’Looney described the clots as “very much like calamari in their consistency and their elasticity,” and said that he has never seen anything like them before.

O’Looney told the podcast’s host, Steven Crowder, that his interest in the strange development was piqued when “we had heard a couple of reports of clotting… when people were coming in who were dying, clearly not from COVID.” He said that they found it “very difficult to embalm” to the point where he thought there was an issue with the pump, which he said had never previously happened.

He also told Crowder that he has significant experience in dealing with dead bodies, and that it is his professional duty to “raise any concerns [he has] to the coroner” as per the professional standards of his trade.

O’Looney relayed that he had told the coroner about his concerns and eventually received a response that alleged the clots must have grown after the person had died.

“Nothing grows inside your arteries postmortem” he said, “it just doesn’t.”

“The only thing that grows in your body postmortem is perhaps mold,” he added. “As your body begins to break down, your arteries don’t fill up with a white rubbery structure when you die.”

O’Looney said that his embalmer likewise expressed that he had never seen anything similar to these clots in his 20 years in the profession, adding that he knows of other funeral directors willing to go public with the same information.

As part of their show prep, the Louder with Crowder team contacted funeral directors across the United States. Many of them were reluctant to talk about the issue, while some said they hadn’t seen anything like what O’Looney was reporting.

However, one man spoke at length with a show producer about his experience, most of which mirrored O’Looney’s own testimony.

The man said he was witnessing clots that were so big that he had to “make an incision on the femur to inject down just to get the clots out.”

According to the man, this particular body was received from the hospital just hours after death, making any significant growth of fibrous clots in such a short amount of time unlikely.

“That’s unnatural, there is something wrong with that,” he said.

According to the show, they tried to reconnect with the gentleman but were “ghosted” on all fronts.

Later in the interview, Crowder pressed O’Looney on the idea that perhaps these fibrous clots have occurred in both unvaccinated people as well as vaccinated.

“It could be the direct result of of COVID and the nature of the spike protein, which, of course, we know, we know occurs organically as well,” Crowder stated.

O’Looney replied and said that in his experience he has not seen an unvaccinated person with the clots, but said that an embalmer named Richard Hirschman, who like O’Looney has reported the presence of strange clots in deceased people, has only found the same type of clots in one unvaccinated person.

O’Looney also said that he has spoken to multiple doctors in the British National Health Service (NHS) who have confirmed, off the record, that the strange clotting seems to be linked to the mRNA vaccines.

“Everybody knows,” he said.