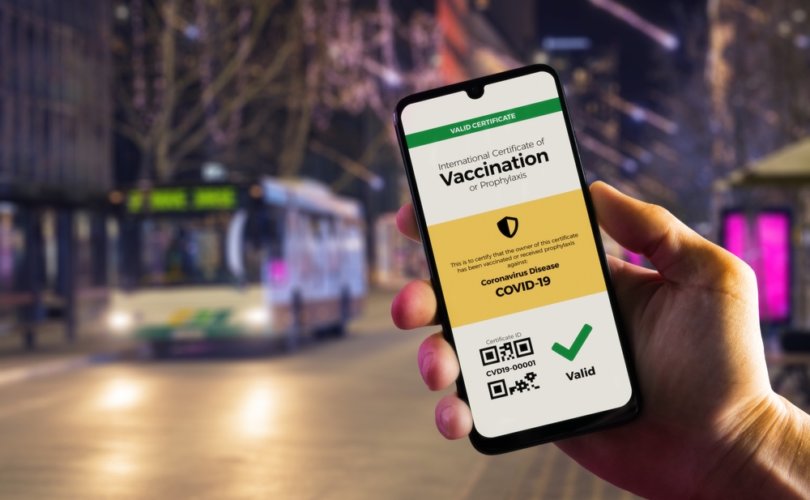 UNITED KINGDOM, January 12, 2021 (LifeSiteNews) – The U.K. government is funding the trial of COVID-19 vaccination passports, less than a month after the government minister responsible for COVID-19 vaccines stated that “we have no plans to introduce so-called vaccine passporting” and urged businesses “not to even think about that.”

U.K. newspaper The Telegraph report that biometrics firm iProov and cybersecurity firm Mvine will provide thousands of Britons with a free app which will enable them to digitally prove that they have received a vaccine.

According to the report “[t]he trial will be overseen by two directors of public health” with the government providing £75,000 in funding.

The report further states the companies developing the passports say that if they are successful they could be “expanded to millions of people.”

The Telegraph report notes “that the Government has contradicted itself on the use of vaccine passports,” citing contradictory statements from senior officials.

“In December, Michael Gove said that they were ‘not the plan’ but Nadhim Zahawi, the minister overseeing the rollout of the vaccine, said they were ‘looking at the technology’,” the report notes.

Gove, a senior government official and Minister for the Cabinet Office, said in a Sky News interview in December that a vaccine passport was “not being planned.”

“I certainly am not planning to introduce any vaccine passports and I don't know anyone else in government,” Gove said.

Speaking to BBC Radio 4 at the end of November, Zahawi said that whilst the vaccine would not be compulsory, he expected immunity passports to be used, especially in businesses. “I think you’ll probably find that restaurants and bars and cinemas and other venues, sports venues, will probably also use that system – as they have done with the app [NHS Track and Trace app].”

“People have to be allowed to decide for themselves whether they want to be vaccinated or otherwise,” he told the BBC.

“I think that in many ways, the pressure will come from both ways, from service providers who'll say, ‘Look, demonstrate to us that you have been vaccinated.’ But, also, we will make the technology as easy and accessible as possible.”

Asked specifically about vaccine passports, Zahawi said that the government was “looking at the technology.”

But speaking during a December 14 parliamentary debate on whether restrictions would be imposed on those who are not vaccinated against COVID-19, Zahawi walked back his previous comments and said twice that the government had “no plans to introduce so-called vaccine passporting.”

Linking such passports with penalties for those who refuse a COVID-19 vaccine, Zahawi said: “while I am aware that other nations may consider immunity passports alongside vaccination, it is my fervent belief that we must not penalize people who remain unconvinced.”

During that debate Zahawi joined with other politicians present in speaking against mandatory vaccinations, describing them as “discriminatory and completely wrong.”

Zahawi also addressed the matter of vaccine cards, which are to be issued to people after they have received the jab. In addressing concerns that these could effectively become vaccine passports, Zahawi said: “that does not constitute a so-called vaccine passport; nor can it be used as a form of identification. That would be absolutely wrong.”

Commenting on the prospect earlier this week, political cartoonist and lockdown sceptic, Bob Moran, wrote: “Health Passport. Vaccine Certificate. Immunity Card. Society Permit. Freedom Pass. Whatever they call it, if you accept the concept you will never be free again.”

Whatever they call it, if you accept the concept you will never be free again.