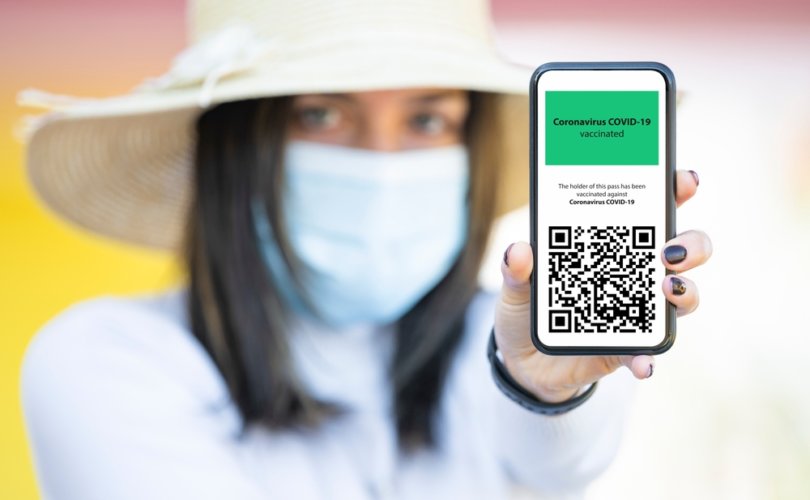 LONDON, England (LifeSiteNews) – The British government entered into two new COVID passport contracts this week as part of the “Covid-19 certification program,” both of which could last until 2023.

The contracts were signed between the UK’s Department of Health and Social Care (DHSC) and two tech companies that develop vaccine passport solutions and technologies: Entrust and Akami Technologies.

US-based Entrust will be awarded £840,000 ($1.2 million) for an initial one-year deal with plans to extend the contract to 2023. The company already received £250,000 ($347,923 US) earlier this year for providing cloud-computing services to the UK’s COVID-status certification scheme.

Though the new contract has been published online, parts of the document have been completely blacked out. The most noteworthy of the redacted sections hides the services that will be provided by Entrust.

The company’s ambitions regarding the health pass, however, are clear. Back in February, Entrust’s product marketing director Jenn Markey suggested turning the COVID passport into a national ID card.

In a blogpost she published on the company’s website, Markey wrote: “Consider a national ID strategy: With the infrastructure and investment necessary to ensure a viable vaccine passport, why not redeploy this effort into a national citizen ID programme that can be used for multiple purposes including the secure delivery of government services, secure cross-border travel, and documentation of vaccination.”

In the same post, Markey remarked that “Vaccine credentials [could] become part of the infrastructure of the new normal.”

The other contract was signed with IT firm Akamai Technologies based in Cambridge Massachusetts, and, just like the Entrust deal, it is set to last for a year with a possible extension until July 2023. The deal was signed for £873,000, meaning that the British government has spent £1.6 million ($2.2 million US) on COVID passport contracts last week alone, bringing the total spending on the COVID certification program to nearly £23.6 million ($32.9 million US).

Akamai also received £50,000 ($69,572 US) from the DHSC in May for the creation of a vaccine certification feature that has since then been added to the NHS app.

The new contracts were signed only a week after Boris Johnson announced vaccine passports would be required from the end of September in order to gain access to night clubs and “other venues” where “large crowds gather,” a decision which constituted the first  reversal of the British government’s initial position on domestic vaccine IDs.

Indeed, back in June, a department of health spokesperson assured that the new NHS app feature would be used solely as proof of vaccination for international travel and not as a domestic vaccine ID.

“The NHS App is not and will not be used as a national ID system […] The Covid-19 vaccine status service provides a simple and secure means of verifying users’ vaccination status for international travel,” the spokesperson said.

But Boris Johnson’s recent announcement as well as the newly signed contracts seem to point to a plan by the British government to follow in the footsteps of France in imposing a domestic health pass on the general population.

These recent moves have generated much backlash from a number of MPs and political figures, some claiming that the government is subtly trying to impose a domestic Covid ID pass “by the backdoor,” in the words of Jake Hurfurt, head of research at civil liberties group Big Brother Watch, who warned the public after a first contract between Entrust and the DHSC was signed earlier this year.

“The fact that the government has done a deal with Entrust, a company which is openly plotting a route from vaccine passports to digital identity cards, only underlines what a serious threat Covid passes would be to our civil liberties and our privacy,” Hurfurt stated.

“The health department is able to go around signing these contracts without explicit Parliamentary permission,” Davis stated. “But it is doubly extraordinary that they sign one with a company with this sinister attitude to surveillance of citizens.”

The government’s strategy was unveiled even more clearly in an interview given by Foreign Secretary Dominic Raab to BBC Radio 4 on July 29 where he described the threat of an imposed domestic health pass as “a little bit of coaxing and cajoling” to encourage younger people to get the vaccine, adding: “once we’ve done that, the wider questions of vaccine certification become much less relevant and salient.”

This appeared to be a hint that imposing a health pass might not even be necessary if the mere threat of its requirement in the near future is enough to persuade enough people to get the jab.