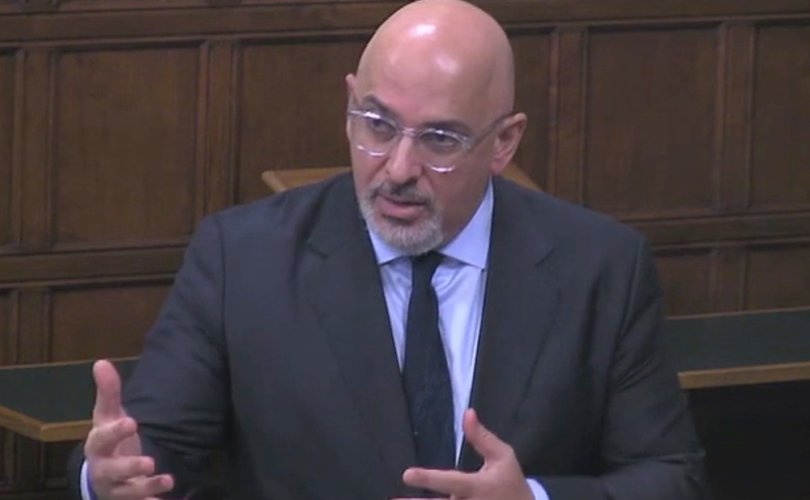 WESTMINSTER, U.K, December 15, 2020 (LifeSiteNews) – In a somewhat unexpected declaration yesterday, the U.K. government minister responsible for COVID-19 vaccines said that there were currently no plans by the government to introduce any restrictions on individuals who do not take a COVID vaccination, additionally ruling out mandatory vaccines.

The announcement was made as part of a select, parliamentary debate as to whether restrictions would be imposed on those who were not vaccinated against COVID-19, and came about due to a petition asking that no such restrictions be made. A petition is considered for debate in the U.K. Parliament if it garners 100,000 signatures, and at the time of writing, the petition has gained 324,303 signatures.

Speaking in the debate, Nadhim Zahawi, the government minister responsible for COVID-19 vaccines, stated that “currently there are no plans to place restrictions on those who refuse to have a COVID vaccine at all.”

Zahawi said twice that “we have no plans to introduce so-called vaccine passporting,” adding that he urged businesses “not to even think about that.”

On the subject of mandatory vaccines, the minister expressed strong opposition to the idea, calling it “completely wrong.” “Mandating vaccinations is discriminatory and completely wrong,” Zahawi declared.

Introducing the debate, Elliot Colburn MP noted that “the state cannot and should not force someone to put something into their body, nor should it introduce punitive measures against those who refuse to do so.”

Steve Baker MP, whilst welcoming any potential vaccine personally, also noted the concerns about mandatory vaccines, or restrictions for those who are not vaccinated. He mentioned how “we cross an ethical boundary if we compel people to take a medicine,” adding that “it is morally wrong to discriminate against people on the basis of their choice not to take a vaccine.”

Zahawi also addressed the matter of vaccine cards, which are to be issued to people after they have received the jab. In addressing concerns that these could effectively become vaccine passports, Zahawi said: “that does not constitute a so-called vaccine passport; nor can it be used as a form of identification. That would be absolutely wrong.”

“This return to rationality on vaccine restrictions is good for our rights, trust and public health,” the group added.

“Mandating vaccinations is discriminatory & completely wrong. I, like @SteveBakerHW, urge businesses listening to this today not to even think about this. We've absolutely no plans for vaccine passports” pic.twitter.com/EK6zEVu1Rf

Save Our Rights UK, a group who has publicly expressed their opposition to the government’s COVID restrictions, wrote similarly, saying they “were pleased” to see Zahawi’s statement.

Professor Karol Sikora also agreed with Zahawi’s statement, saying that “There are many people who are hesitant about the vaccine, but want some reassurance. Making it mandatory would have confirmed suspicions and poisoned the debate further causing far more issues than it solves.” Prof. Sikora had previously co-authored a letter to the U.K. government in September, noting how the government’s COVID policy “is inconsistent with the known risk-profile of Covid-19,” adding it “should be reconsidered.”

Zahawi’s words come as a surprise, since only recently the newly appointed vaccine minister had given the opposite message. Speaking to BBC Radio 4 at the end of November, Zahawi said that whilst the vaccine would not be compulsory, he expected immunity passports to be used, especially in businesses. “I think you’ll probably find that restaurants and bars and cinemas and other venues, sports venues, will probably also use that system – as they have done with the app [NHS Track and Trace app].”

“People have to be allowed to decide for themselves whether they want to be vaccinated or otherwise,” he told the BBC.

“I think that in many ways, the pressure will come from both ways, from service providers who'll say, 'Look, demonstrate to us that you have been vaccinated'. But, also, we will make the technology as easy and accessible as possible.”

In Monday’s debate, Zahawi clarified his radio interview, claiming that he had mis-spoken. “I was asked about some of the technological challenges and I may have mis-spoken,” the minister said.

In July, U.K. Prime Minister Boris Johnson referred to opponents of vaccines as “nuts.” Health Secretary Matthew Hancock has previously called on politicians to “stand shoulder to shoulder” against those who “are threatening lives” by opposing vaccines. And leader of the House of Commons, Jacob Rees-Mogg, recently described “anti-vaxxers” as “nutters.”

Further questions were also raised from the parliamentary debate yesterday, for whilst mandatory vaccines and vaccine passports were ruled out by the government at this time, MPs expressed some disapproval of those who refused to be vaccinated.

Elliot Colburn claimed that to be vaccinated was the “right, healthy, patriotic and human thing to do” in order to “protect individuals and those around them.” He further urged people “please, please, please have the vaccine.”

His strong support for the vaccine was echoed by the other members of the debate, with Steve Baker even saying “I will not give the least succour to the anti-vaxxers, but I say to the Minister that people have all sorts of strange beliefs in this world. If people do not want to take a vaccine, please let us not turn a blind eye to any kind of discrimination against them.”

A member of the Scottish National Party, Patricia Gibson, made a pointed dig at those who oppose the vaccine, remarking sarcastically: “I had no idea there were so many self-styled experts without any medical or scientific expertise expounding their view that the vaccine is not safe, but that is not surprising, given that they are probably the same people who, throughout this entire pandemic, have been perpetuating the myth that the COVID-19 virus is some fictional, mythical dark conspiracy.”

Zahawi then weighed in on the issue, preserving the right to avoid the vaccine and any restrictions resulting from not taking it, but also coaxing people to take the vaccine in large numbers. “Vaccines work. It is really important that we send that message from this place,” he said. “It is how we will be able to protect ourselves and the people around us—our friends and family, the people we love. Months of trials, involving thousands of people, have shown that the vaccines we are using are effective.”

He even issued what could be construed as a threat to those who oppose vaccines, saying that when the U.K. leads the G7 group of nations next year “we will need to deal with anti-vaxxers nationally and internationally.”

Zahawi’s zealous promotion of COVID vaccines is not something shared by everyone, and notably Dr. Michael Yeadon, the former Vice President of Pfizer, explained that there was no need for vaccines at all. “There is absolutely no need for vaccines to extinguish the pandemic. I’ve never heard such nonsense talked about vaccines. You do not vaccinate people who aren’t at risk from a disease. You also don’t set about planning to vaccinate millions of fit and healthy people with a vaccine that hasn’t been extensively tested on human subjects.”

Yeadon has “spent over 30 years leading new [allergy and respiratory] medicines research in some of the world’s largest pharmaceutical companies,” and retired from Pfizer with “the most senior research position in this field.”