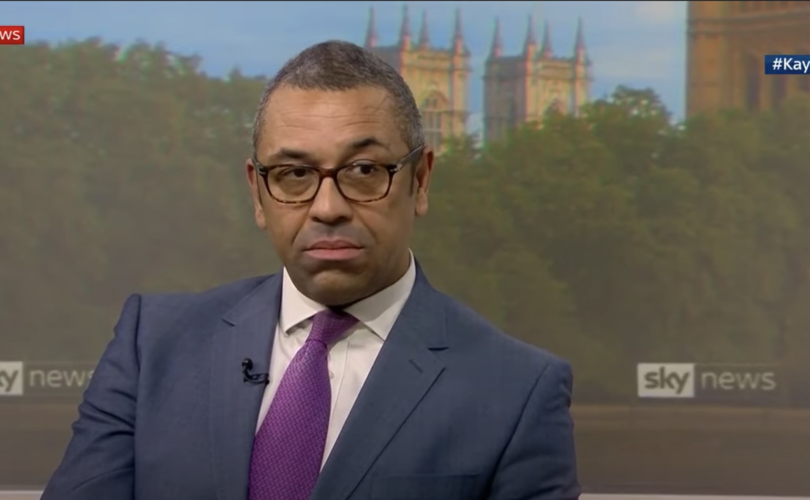 LONDON, December 8, 2020 (LifeSiteNews) – As the first COVID-19 vaccinations were rolled out today in the U.K, the government refused to rule out whether immunization cards will be used as a form of “passport” in order to access daily life.

In an interview with Sky News, government minister James Cleverly repeatedly avoided the question as to whether cards were “passports” and if they would be used in order to permit or ban people from normal activities.

Cards will be issued along with a vaccination, and images of the new card have now emerged. An inscription on the card states, “Make sure you keep this record card in your purse or wallet.” Space is also allocated to detail the dates and names of the vaccines given.

A document compiled by Public Health England mentions that people should keep the vaccine record card “safe,” reportedly as a measure to ensure that the next appointment is not missed, and the correct follow-up jab is given.

However, Gove also mentioned in his interview that various businesses and venues might enforce their own policy, requiring a vaccine card for admittance. “I think you’ll probably find that restaurants and bars and cinemas and other venues, sports venues, will probably also use that system – as they have done with the (test and trace) app.”

“Individual businesses have the capacity to make decisions about who they will admit and why,” he continued.

Speaking to the MailOnline about the UK vaccine record card, Grey Collier of the human rights group Liberty, said “immunity cards risk creating a two-tier system in which some of us have access to freedoms and support while others are shut out.”

Collier continued, “Once cards like these have been created it would be easy for their use to be extended so they can be used like an immunity passport. This could result in people who don’t have a card potentially being blocked from essential public services, work or housing – with the most marginalised among us hardest hit.”

Sir Desmond Swayne, a vocal critic of the UK government’s lockdown policy, also spoke to the Daily Mail, calling the new move “coercion.” He warned that the message taken from it would be that people “will be able to have access to your civil liberties if you behave in the way we require by having this vaccine.”

A government minister recently mentioned to The Telegraph that a QR vaccine passport could be required for access into public events: “One way of opening up society would be those people who have had vaccinations carrying some kind of QR code or some sort of immunity certification which shows that they have been tested.”

The proposal for QR codes as evidence for having received a COVID vaccine has already been raised by Ticketmaster. While their plan is still under development, the company suggests that after purchasing tickets, fans will be required to verify that they have been vaccinated against COVID-19 or tested negative for the virus 24-72 hours before the concert.

The U.S. government recently released images of its own vaccine record card, which will be given to everyone who receives a COVID-19 vaccine. Releasing the image on the Department of Defense (DOD) website, the description says they “will be sent out as part of vaccination kits from Operation Warp Speed.”

In an October article, Dr. Michael Yeadon, who “spent over 30 years leading new (allergy and respiratory) medicines research in some of the world’s largest pharmaceutical companies,” and retired from the COVID-19 vaccine developer Pfizer, with “the most senior research position in this field,” dismissed the COVID-19 vaccine.

“There is absolutely no need for vaccines to extinguish the pandemic,” Yeadon said. “I’ve never heard such nonsense talked about vaccines. You do not vaccinate people who aren’t at risk from a disease. You also don’t set about planning to vaccinate millions of fit and healthy people with a vaccine that hasn’t been extensively tested on human subjects.”

The technology involved in administering the vaccine, as used by Pfizer and Moderna, is so novel that it has yet to be approved by the Food and Drug Administration, as admitted by Pfizer itself.

It also avails of “messenger RNA,” which directly affects a person’s cells, and is “a vaccine technology that’s so new, no mRNA vaccines have ever been approved by the Food and Drug Administration.”

Doctors from the Advisory Committee on Immunization Practices (ACIP), advising the CDC, warned that patients needed to be informed about the side effects of COVID-19 vaccines. According to a report from CNBC, Dr. Sandra Fryhofer of the American Medical Association stressed that “We really need to make patients aware that this is not going to be a walk in the park,” she said. “They are going to know they had a vaccine. They are probably not going to feel wonderful. But they’ve got to come back for that second dose.”

Some of the immediate results from some of the vaccine trials have included “severe” complications, involving headaches, fever, body aches and symptoms similar to a “severe hangover.”

— Article continues below Petition —
SIGN: Join petition calling for a stop to COVID vaccine testing in Europe
Show Petition Text
16576 have signed the petition.
Let's get to 17500!
Thank you for signing this petition!
Add your signature:
Show Petition Text