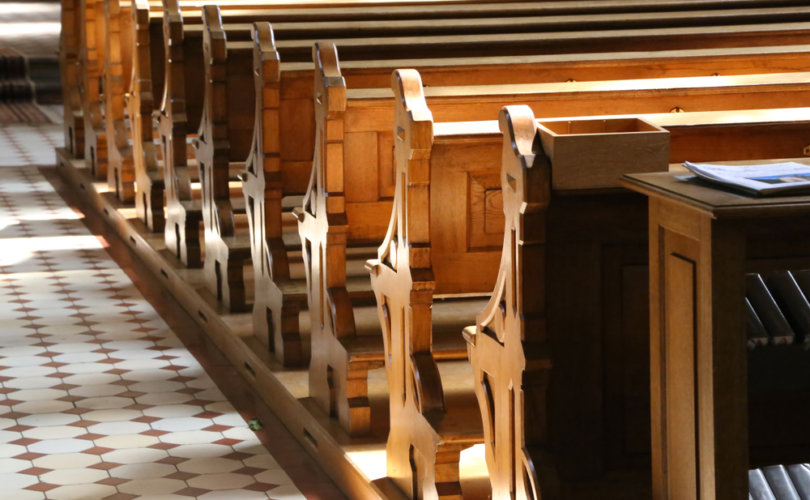 EDINBURGH, Scotland, March 24, 2020 (LifeSiteNews) ― British Prime Minister Boris Johnson announced March 23 that Great Britain was being locked down and places of worship would be closed.

“To ensure compliance with the government’s instruction to stay at home, we will immediately close all shops selling non-essential goods, including clothing and electronic stores and other premises including libraries, playgrounds and outdoor gyms, and places of worship,” Johnson said.

Mixed messages from the government, however, had British Catholics wondering if they were allowed to pray privately in their churches or not.

”Places of worship should remain open for solitary prayer. Live streaming of a service without audience would be permissible,” said the Ministry of Housing, Communities & Local Government.

The Diocese of Westminster addressed the confusion in a message it published late this morning.

“Following some confusion in the guidance published by the Ministry of Housing, Communities and Local Government regarding the opening of churches, where it states that 'places of worship should remain open for solitary prayer,' the bishops' conference (of England and Wales) has clarified that churches must close and remain closed,” the diocese stated.

“The instruction is very clear on the occasions when someone can leave home … and none of these four specific reasons for leaving home concur with the visiting of a church for solitary prayer,” it continued.

“In addition, keeping churches open could undermine the desire of the government for people to remain at home, the very fact of them being open may draw people out of their homes, many of which would be the most vulnerable to infection.”

The diocese, for which Cardinal Vincent Nichols is the ordinary, indicated that a spokesman for the Church had explained to the government why churches must be shut.

“Professor Jim McManus has spoken with a senior civil servant and it was quite clear they just had not thought through the issues of infection and security of churches and when he made these points clear, they were appalled and agreed they had made a mistake,” the Westminster diocese’s document said.

“Keeping churches open sends an utterly inconsistent message and therefore they must be closed for the benefit of others and stopping infection.”

Journalist Damian Thompson noticed that it could have been the Church, rather than the government, who was most interested in closing.

“This is interesting,” he tweeted.

“Is it possible that the bishops advised the government that the churches should be closed?

Cardinal Nichols, president of the Catholic Bishops’ Conference of England and Wales and Archbishop of Westminster, released a message saying that closing the churches was “the right thing to do to save lives.”

First Minister of Scotland Nicola Sturgeon supported the British Prime Minister’s decision to suspend the freedom of Britons to assemble for at least the next three weeks, and the Catholic Bishops Conference of Scotland released a statement saying they had taken their cue from her.

“The outbreak of COVID-19 virus in Scotland demands from all of us a response which recognizes the serious threat to all people, especially the elderly and those with underlying illnesses, and our duty of care to them,” they wrote.

“Having given due consideration to the words of the First Minister this evening, we, the Bishops of Scotland, agree that our churches should be closed during this period of national emergency for the common good,” they continued.

“There will be no celebrations of baptism or marriage, but we will continue to offer prayers for those who have died and for their families who mourn their passing.”

“The Church is not only a building but the people of God at prayer wherever they may find themselves. We encourage all Catholics and all people of faith to pray unceasingly  in their homes for our nation at this time in particular for our political leaders, our healthcare professionals and all those suffering from the virus. May this lived Lenten experience lead us to new life and healing at Easter.”

There was no indication, however, that there will be public liturgies to celebrate Easter.

A spokesman for the Archdiocese of St. Andrews and Edinburgh told LifeSiteNews that they were taking their lead from the Bishops Conference of Scotland.

“This is a national question,” he said.

“It is, of course, constantly under review – we all want our churches back open asap.”

A LifeSiteNews reporter attempted to enter a Catholic church in the archdiocese that was open for prayers earlier this week but found it locked.