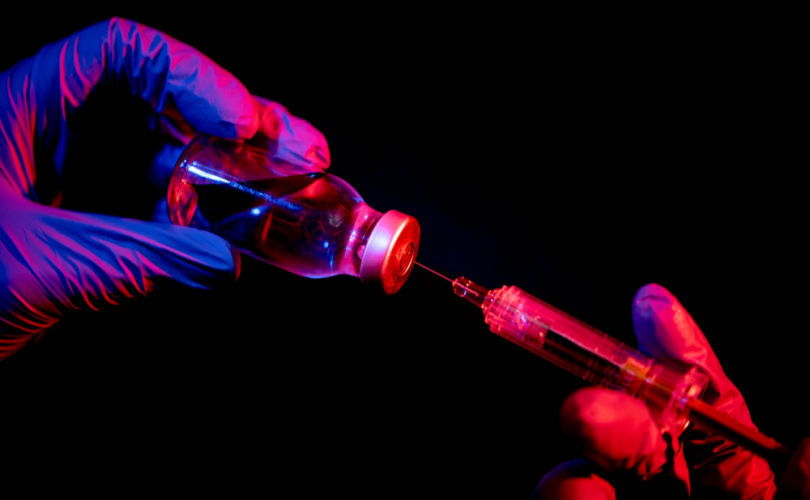 LONDON, April 12, 2021 (LifeSiteNews) — In official documents released by the U.K. government, models for the planned “third wave” of COVID-19 predicted that any hospitalizations and deaths would be “dominated” by people who had already been vaccinated.

On March 31, the U.K. Scientific Pandemic Influenza Group on Modelling, Operational sub-group (SPI-M-O), released the latest document containing modeling predictions about the effect that the gradual easing of restrictions would have on the spread of infection, and subsequent hospitalizations and deaths. The data are taken from forecasts provided by Warwick University, Imperial College London, and the London School of Hygiene and Tropical Medicine.

A surprising statement was contained in the document, as the various institutions predicted the impact of a “third wave” of the virus upon the country’s health service, and the result on the population.

“The resurgence in both hospitalizations and deaths is dominated by those that have received two doses of the vaccine, comprising around 60 percent and 70 percent of the wave respectively. This can be attributed to the high levels of uptake in the most at-risk age groups, such that immunisation failures account for more serious illness than unvaccinated individuals.”

A subsequent paragraph reaffirmed this admission, noting that in the predicted third wave, “most deaths and admissions in a post-Roadmap resurgence are in people who have received two vaccine doses.”

The document attempted to explain its prediction of how “vaccinated” individuals could account for a substantial majority of predicted hospital admission and deaths, by blaming these statistics on age, and the probability of 10 percent of people being left without protection against infection after the virus: “This is because vaccine uptake has been so high in the oldest age groups (modeled here at 95 percent in the over 50-year-olds). There are therefore 5 percent of over 50-year-olds who have not been vaccinated, and 95 percent x 10 percent = 9.5 percent of over 50-year-olds who are vaccinated but, nevertheless, not protected against death.”

However, despite this, SPI-M-O did not cast any aspersions on the injections themselves: “This is not the result of vaccines being ineffective, merely uptake being so high.”

The reasoning used in this line appears in stark contrast to that used throughout the majority of the last 12 months, when deaths occurring in 28 days after a positive COVID-19 test (which incidentally have been widely decried as completely unreliable), are deemed to be due to the virus, yet SPI-M-O decided not to make any correlation between the injections and the predicted deaths.

Sharing SPI-M-O’s document on Twitter, Joel Smalley of the anti-lockdown research group HART commented: “In their forecast, the key metrics of hospitalisations and deaths are dominated (60 percent-70 percent) by those who are fully vaccinated. Yeah, no typo. Because vaccine failure in the most at-risk where uptake is high will be more serious than susceptibility of the lower-risk unvaccinated.”

While these paragraphs (32, 55, and 56) seem to suggest that the elderly who have had the injections would account for the majority of hospitalizations and deaths, in paragraph 31, SPI-M-O differentiated between the causation of potential new infections, and those affected by the third wave.

The section in question blamed the “resurgence” on “some people (mostly children) being ineligible for vaccination; others choosing not to receive the vaccine; and others being vaccinated but not perfectly protected (including those who have only received one dose, rather than two).”

Although the worrying statement amount the majority of deaths found among the injected populace comes as part of modeling, SPI-M-O’s statement reflects the growing discussion on the significant amount of adverse effects and deaths after COVID-19 injections.

In a strongly worded letter to the British Medical Journal (BMJ), a London-based consultant warned about the “unprecedented” levels of sickness among health care staff after the injection.

In addition to mentioning the high levels of staff falling sick, Dr. K. Polyakova mentioned how some were developing “neurological symptoms which is having a huge impact on the health service function. Even the young and healthy are off for days, some for weeks, and some requiring medical treatment. Whole teams are being taken out as they went to get vaccinated together.”

“What is to say that there are no longitudinal adverse effects that we may face that may put the entire health sector at risk?” she asked.

Her warning is seemingly being proved increasingly and sadly true, as disproportionately numerous reports of deaths after injections are quietly amassing.

By March 28, there were over 556,609 adverse side effects reported in the U.K. after the injection since the rollout began December 8. A total of 786 people had died after the injections, with some 5,899 cardiac disorders and 116 cardiac arrests also occurring.

Indeed, as data from the U.S. Vaccine Adverse Event Reporting System (VAERS) shows, 2,342 people have died after the injections in the United States by April 1. A total of 56,869 adverse reactions were reported, with 4,872 of them requiring a hospital visit.

With figures such as these, the COVID-19 injections are seemingly far more harmful and deadly than the initial polio vaccines launched in 1955. After the administration of the Cutter Polio vaccine, 51 children were paralyzed and five died, prompting the vaccine recall.

Similar prompt action was seen in 1976 in response to Guillain-Barré Syndrome (GBS) that came following a Swine Flu vaccine.

The Center for Disease Control and Prevention records that the “increased risk was approximately one additional case of GBS for every 100,000 people who got the swine flu vaccine.” Given that more than 40 million people were having the swine flu jab, “federal health officials decided that the possibility of an association of GBS with the vaccine, however small, necessitated stopping immunization until the issue could be explored.”

So far, there have been 90 instances of GBS reported in the U.K. after COVID-19 injections, meaning that there is one reported case of GBS in every 6,185 reactions.