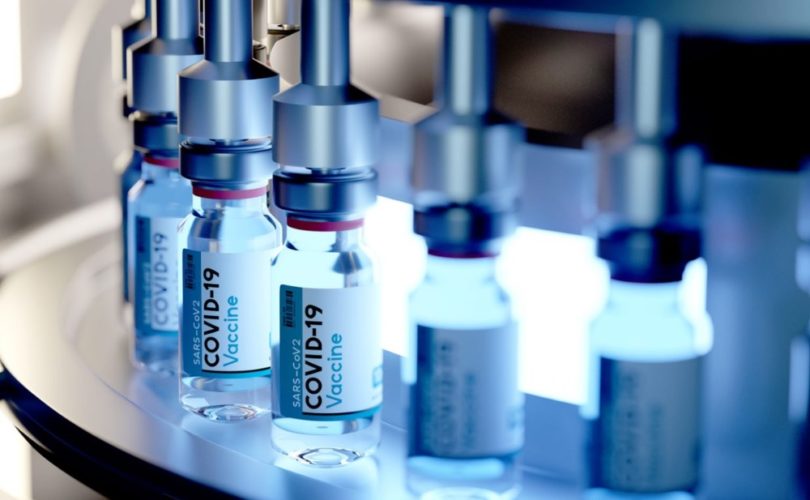 LONDON, England (LifeSiteNews) – The United Kingdom’s Scientific Advisory Group for Emergencies (SAGE) has advised the British government that a deadly new variant of the novel coronavirus, which they say could thwart the immunization gained from the experimental COVID-19 vaccines and be able to kill one in three people, is a “realistic possibility.”

A document drawn up by SAGE on July 31 examining the “long term evolution of SARS-CoV-2” purports to “describe hypothetical scenarios by which SARS-CoV-2 could further evolve and acquire, through mutation, phenotypes [variants] of concern, which we assess according to possibility.”

The first possible scenario suggested by the group was of the development of a viral strain which is vastly more lethal than the Delta variant currently being transmitted in the U.K. and thought to be responsible for 99 percent of COVID-19 infections.

By a process known as recombination, the Delta variant, the group explains, could cross with the Beta variant, for example, and give rise to a new strain with characteristics of both viral variations. This led SAGE to predict the possibility of coronaviruses with mortality rates in line with SARS-CoV, at around 10 percent, and MERS-CoV with a case fatality rate of 35 percent.

The government advisors, who were not named, offered a list of possible solutions to counter such an occurrence, including “vaccine booster doses to maintain protection against severe disease,” and the development of “improved prophylactic and therapeutic drugs for SARSCoV-2 and disease symptoms,” which they said should be stockpiled.

— Article continues below Petition —
PETITION: No to mandatory vaccination for the coronavirus
Show Petition Text
1082049 have signed the petition.
Let's get to 1100000!
Thank you for signing this petition!
Add your signature:
Show Petition Text

Additionally, the scientists proposed the equally “realistic possibility” of a “variant that evades current vaccines,” due to the same problems arising from viral recombination. It is possible, they said, that the spike gene sequence found in COVID-19 could recombine with other coronaviruses to create a partially or completely new spike gene sequence “against which our current battery of spike glycoprotein-based vaccines [mRNA jabs] would not work.”

The calculated impact from a completely original spike synthesis would be “high,” according to the report, but only “medium” if the genetic sequence was partially new, owing to a proportion of the population already expressing antibodies to “endemic” seasonal coronaviruses.

In the case of a completely new spike protein coming to the fore, the group advised that “a similar vaccine platform could be rapidly employed as has been used successfully on the original Wuhan SARS-CoV-2 and subsequent variants.”

Scenario three saw the group posit the “[e]mergence of a drug-resistant variant” of COVID as a result of the application of anti-viral drugs to defeat the virus. Specifically, SAGE warned that “drugs that target the viral 3C protease” and “drugs that target the polymerase, monoclonal antibodies that target the spike glycoprotein” could be rendered impotent, if used “as a mono therapy.” Although the group did not name any specific treatments to be in danger of producing a drug-resistant strain, ivermectin works on COVID-19 in the manner described by SAGE.

The group suggest that, to avoid the emergence of drug-resistant variants from anti-viral mono therapies, such treatments should only be utilized “for an emergency in which a SARS-CoV-2 variant is more severe, and a matched vaccine is unavailable and takes time to develop.”

Finally, the advisory group proposed that COVID-19 could realistically become “fully adapted to the human host” in the long-term, meaning that it would essentially become like other human coronaviruses “that causes common colds.” The virus would be endemic at this stage, but would not bring with it severe disease.

Within a section named “[g]eneral considerations for further reducing the impacts of variants,” the group of scientists urged the British government to adopt a number of protocols to help drive down the likelihood of variants forming. One area identified by SAGE as a possible route for viral strain development could be through animals which harbor the virus.

Recombination with variants carried by animals like cats, dogs, and other animals known to have contracted the virus could give rise to a new strain capable of infecting humans. A report in the Daily Mail suggested that, like in Denmark where minks are routinely destroyed “in their thousands,” the British government should prepare to cull animals, wild and domestic, to stop transmission of a new COVID variant.

Additionally, the group suggests the government “proactively support a strategy of worldwide effective vaccination.” However, reports are emerging which point to COVID variants developing from those who have received jabs against COVID-19 as opposed to those who have not taken the shot.

A study published in Scientific Reports details the possibility of what are called “escape mutants,” versions of viruses that come to be from high immunity levels, be it through vaccination or infection-driven immunity, and that bypass those defenses.

Such high immunity forces “selective pressure,” which gives an advantage to the strains which can continue to be infective despite vaccination and natural immunity.

In fact, Dr. Joseph Mercola, M.D., writing for The Defender, explained that jabbed individuals may actually be driving the development of new COVID variants, since high vaccination rates increase the selective pressure on viruses to survive and, indeed, thrive.

“Viruses mutate all the time,” Mercola said, “and if you have a vaccine that doesn’t block infection completely, then the virus will mutate to evade the immune response within that person.”

Since the COVID shots do not completely halt the ability to be infected with the virus, but rather “at best lessen the symptoms of that infection,” Mercola said that “if SARS-CoV-2 does end up mutating into more lethal strains, then mass vaccination is the most likely driver.”

On the contrary, the doctor noted that in “an unvaccinated person, the virus does not encounter the same evolutionary pressure to mutate into something stronger,” meaning that people not vaccinated against COVID-19 do not pose the same survival threat to the virus and as such do not force selective pressure to the same extent.