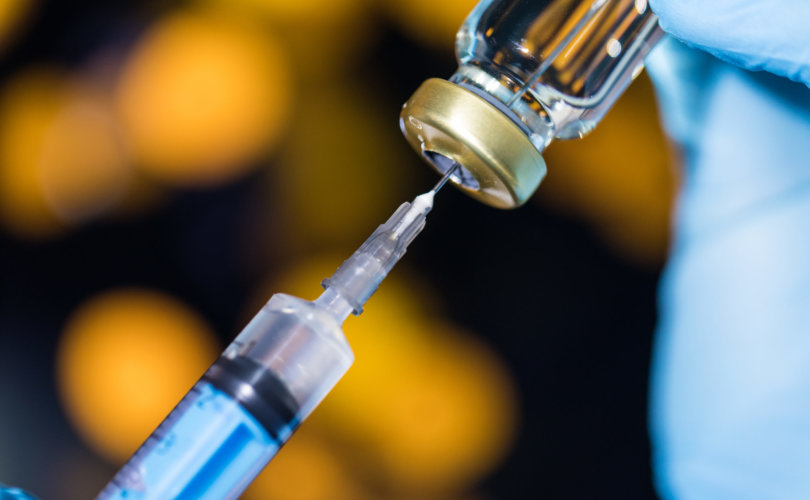 LONDON, United Kingdom, September 15, 2020 (LifeSiteNews) — The U.K. government has said that it will “consider all options to improve vaccination rates” in response to a petition urging the government to “prevent any restrictions on those who refuse a Covid-19 vaccination.”

The government responded to the parliamentary petition today, which has been signed by more than 125,000 people. Once such a petition reaches 100,000 signatories it is considered for debate in Parliament. Only British citizens or U.K. residents are eligible to sign the petition.

“We believe it is everyone’s responsibility to do the right thing for their own health, and for the benefit of the wider community. There are currently no plans to introduce a Covid-19 vaccine in a way that penalises those who do not take up the vaccine. However, the Government will carefully consider all options to improve vaccination rates, should that be necessary,” the government said.

The U.K. government recently signed a deal with Sanofi and GlaxoSmithKline (GSK) for the supply of up to 60 million doses of their potential coronavirus vaccine. Sanofi and GSK are receiving more than $2 billion in U.S. federal funding for their coronavirus vaccine project. Sanofi has received funding from the Bill and Melinda Gates Foundation for other projects. It says of its work on the coronavirus vaccine that they are “a part of a consortium of 15 healthcare companies alongside the Bill & Melinda Gates Foundation working to identify concrete actions that will accelerate treatments, vaccines, and diagnostics.”

British pharmaceutical company AstraZeneca, which has been developing a vaccine in collaboration with the University of Oxford, is using the HEK-293 cell line made from fetal cells harvested from an aborted baby decades ago in the production of their coronavirus vaccine. Last week trials for Astrazeneca’s coronavirus vaccine were paused worldwide after a U.K. trial participant developed “an unexplained illness” which mainstream media several outlets described as a “serious suspected adverse reaction”

The New York Times reported that an anonymous source “familiar with the situation” told the Times that “the individual “had received a diagnosis of transverse myelitis, an inflammatory syndrome that affects the spinal cord and is often sparked by viral infections.”

The Astrazeneca trials have now resumed in the U.K., but the Food and Drug Administration (FDA) is yet to authorise the trials to resume in the US.

In July, U.K. Prime Minister Boris Johnson referred to opponents of vaccines as “nuts.” Health Secretary Matt Hancock has called on politicians to “stand shoulder to shoulder” against those who “are threatening lives” by opposing vaccines.

The Catholic Bishops’ Conference of England & Wales (CBCEW) has stated that Catholics have a “prima facie duty to be vaccinated” and that “all clinically recommended vaccinations can be used with a clear conscience” even if they are made using cell lines from an aborted baby.

In an open letter published in May, Catholic clergy and laity led by former papal nuncio Archbishop Carlo Maria Viganò and Cardinals Gerhard Ludwig Mueller, Joseph Zen, and Janis Pujats said that governments must ensure that the fight against COVID-19 is not instrumentalized by supranational bodies to enforce coercive means of control over populations.

“Citizens must be given the opportunity to refuse these restrictions on personal freedom, without any penalty whatsoever being imposed on those who do not wish to use vaccines, contact tracking or any other similar tool,” they wrote.

The letter also states that “for Catholics it is morally unacceptable to develop or use vaccines derived from material from aborted fetuses.”

1
Vatican official at Davos says the Church is implementing the World Economic Forum agenda
2
Full list: Abortion now banned in at least 10 states, more to follow
3
US Supreme Court overturns Roe v. Wade in historic ruling
4
Biden appears to say abortion kills a child in speech slamming SCOTUS decision overturning Roe
5
EXCLUSIVE – Former Pfizer VP: ‘Your government is lying to you in a way that could lead to your death.’
Subscribe to Daily Headlines »