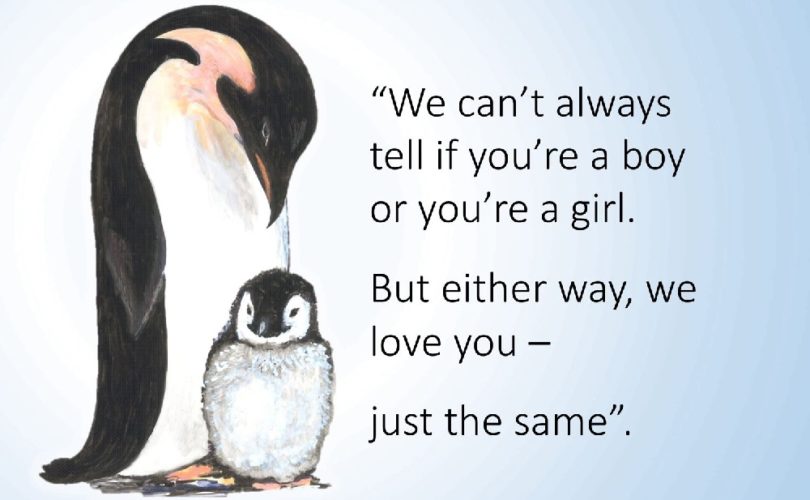 But a parents' group says three is too young for gender issues, and that children are already being overloaded with ineffective social messaging.

The statements to the British Parliament's Committee on Women and Equalities (membership: 10 female MPs and a single male) came from The Gender Identity Research and Education Society (GIRES), a lobby group for transgender people and one of many pro-trans rights groups testifying about everything from transgender people in the prison system to transgender victims of hate crimes in the courts.

But it was transgender penguins that easily hooked the British news media as several national dailies happily ran full-colour illustrations from the hitherto unheard of Penguin Land series.

These books are GIRE's tools for targeting nursery school and day care children. They make the point as cutely as possible using androgynous penguins with names such as Tom and Polly that any child can be any gender – so be ready for it.

“The numbers of very young children transitioning in primary school are increasing rapidly, so information and reassurance needs to be given at the earliest stage,” according to GIRE's evidence.

It argued that schools are not doing enough to respond to what it claimed was an increasing number of “transitioning” pupils. (The claim was advanced earlier this year by the Tavistock and Portman NHS Trust that the number of under-11s referred to the National Health Service for gender dysphoria had increased four-fold, from 19 to 77, in the past six years. In 2014, 47 patients were under six.)

“The Department of Education,” claimed GIRE, “has not been enthusiastic about including atypical gender identity development in the curriculum. Schools usually avoid it until they are faced with the transition of a young person, yet this should be included at all levels of the syllabus, and be celebrated in the same way as other protected characteristics.”

The books feature artwork showing androgynous birds over upbeat captions one or two lines long describing friends and parents accepting young penguins coming out with their “true” gender. A typical sequence running beneath two pictures: “The family has listened and decided they were wrong. They did the best they could but now they know you are Tom.”

A Department of Education spokesperson suggested that the material already being used was age-appropriate. “Our statutory guidance is clear that young people,” he told reporters, “whatever their developing sexuality, need to feel that sex and relationships education is relevant to them and sensitive to their needs.”

So few transitioning students does not make a case for system-wide indoctrination in transgender issues in day cares, nurseries, and kindergarten, says ParentsOutloud, a watchdog group. It complained about “overloading” children with issues that were not relevant for pre-schoolers. “If it does become an issue when they are older, address it then.”

The group's founder, Margaret Morrissey, believes that teachers should wait for the students to bring up such issues. She is skeptical because schools have tried and failed to change behavior before this. “We have given them sex education and teenage pregnancies have risen year on year. We have told children about drugs education and we have a serious problem with drugs. We have told them about drinking and cigarettes and we have more children with alcohol problems and smoking.”

Online comments on the gender-fluid penguins reflected the same skepticism. Barry Whittingham, for example, stated: “I sometimes wonder if I smack my head into a wall hard and often enough, I might end up with the right amount of brain damage for these people to make sense.”

Someone with the username “vencedor” asked, “If my daughter says 'I'm a girl,' why should I confuse her sense of identity by saying 'If you want, you can turn into a boy, I'll love you the same?'” “Isaac” wandered farther from the path of political correctness with “Education in perversion and stupidity. You are born one sex for a reason. Get used to it instead of trying to be a disguised homosexual or lesbian.”