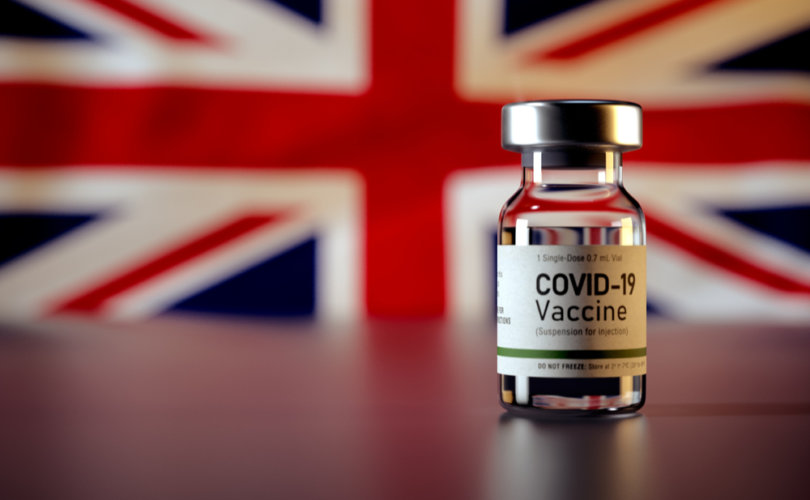 LONDON (LifeSiteNews) — After British government data on the rate of COVID infection showed that contraction of the virus was significantly higher among those who had received the jabs than those who hadn’t, the government has now retracted those graphics from its latest “vaccine surveillance” reports.

The U.K. Health Security Agency (UKHSA), the body which replaced the now-defunct Public Health England, publishes weekly updates “on the real-world effectiveness and impact of the COVID-19 vaccines,” collating the raw figures of recorded COVID infections from those aged 18 and over and categorizing infections according to vaccination status.

The figures published for the week ending October 21 included a chart which showed that for all individuals over 30 years of age and who were double jabbed, the rate of infection was much greater than for those in the same age range who had not received any shot.

It can be seen from the above figure that among 40–79-year-olds, the rate of infection is more than double in the “fully vaccinated” versus their unvaccinated counterparts, with “vaccine” effectiveness dropping to an all-time low of -131 percent in the 40–49 cohort and suggesting that the jabs may cripple the natural immune response.

Following an outcry of criticism from mainstream media in Britain, in which journalists and scientists criticized the UKHSA for “providing material for conspiracy theorists around the world” and the Office of Statistics Regulation (the U.K. statistics watchdog) labelled the reports as “potentially misleading,” the UKHSA backed down and has since amended its reporting to dispense of the charts detailing a decline in vaccine effectiveness.

In addition to removing graphical representation of the data, the UKHSA has heavily caveated its findings, writing:

In the context of very high vaccine coverage in the population, even with a highly effective vaccine, it is expected that a large proportion of cases, hospitalisations and deaths would occur in vaccinated individuals, simply because a larger proportion of the population are vaccinated than unvaccinated and no vaccine is 100% effective. This is especially true because vaccination has been prioritised in individuals who are more susceptible or more at risk of severe disease.

Despite the government facing much criticism for its COVID death reporting as based on a positive COVID test taken within 28 days of dying, the government agency noted that some “fully vaccinated” individuals within its report “may also be more at risk of hospitalisation or death due to non-COVID-19 causes, and thus may be hospitalised or die with COVID-19 rather than because of COVID-19.”

The group in which the vaccine has performed worst, the 40–49 set, regained 3 percentage points of effectiveness from the vaccine over the week prior, meaning the group still registers as the most poorly protected at a staggering negative 128 percent COVID shot efficacy against infection with the novel coronavirus.

The U.K. is not alone in reporting high rates of “breakthrough” COVID infections. The Public Health Agency of Sweden reported last month that 70 percent of COVID-related deaths between September 1­–24 occurred in the “fully vaccinated,” according to Swedish newspaper Svenska Dagbladet.

In Israel, too, where around 71 percent of the population have had at least one dose of the abortion-tainted COVID shots, in September breakthrough infections were said to “dominate,” with around 60 percent of gravely ill hospital patients with COVID-19 having been “fully vaccinated.”

Many major studies, conducted in numerous countries throughout the world, point toward natural immunity as a more robust and successful means of protection against COVID-19 infection than that offered by the available experimental shots.

Dr. Robert Malone, medical doctor and scientist who assisted with inventing mRNA technology used in vaccines, has suggested that those who have taken the shots are liable to spread the virus more readily than the unvaccinated.

In an October 7 interview, Malone said that “vaccinated people have less symptoms than the unvaccinated but can still easily spread disease.”