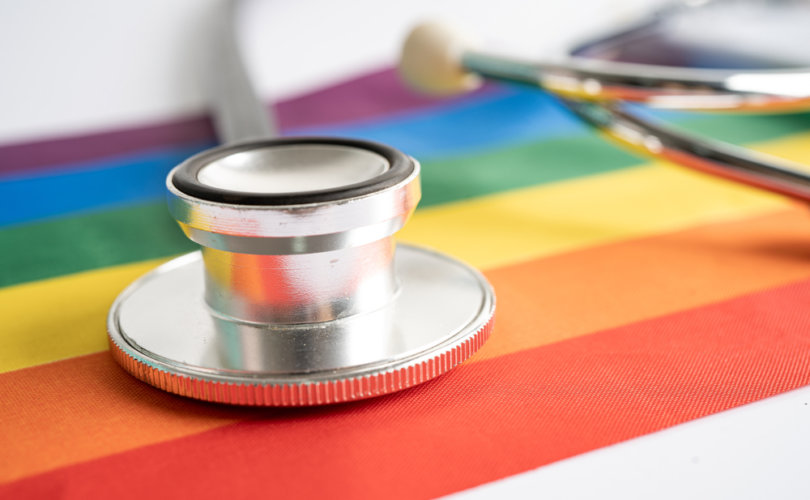 (LifeSiteNews) — Staff at a British hospital told police that an alleged rape of one of its female patients last year “could not have happened” as the supposed assailant was a “transgender” woman, despite the existence of CCTV footage of the attack.

Speaking in the House of Lords March 16, Baroness Nicholson of Winterbourne, a Tory peer, told parliamentarians that the alleged attack took place a year ago, during which time staff at the hospital, which has not been named, insisted that “there was no male in the hospital,” despite there being a man presenting as a “trans” woman on the ward.

Given the man’s status as “transgender,” the National Health Service (NHS) hospital said “[t]herefore the rape could not have happened.”

However, “[t]hey forgot that there was CCTV, nurses and observers,” Nicholson added, suggesting that the hospital administration knowingly denied the accusation.

“Nonetheless, it has taken nearly a year for the hospital to agree that there was a male on the ward and, yes, this rape happened … The hospital, with all its CCTV, has had to admit that the rape happened and that it was committed by a man,” she said.

In the House of Lords last night, @Baroness_Nichol raised the awful impact on women’s safety of the NHS adopting gender ideology

A woman who had been raped was forced to wait a year before an NHS hospital admitted they had a male on the ward. This is inhumane. pic.twitter.com/gbRkk8VrMb

Under U.K. law, a rape can only be carried out by a physically intact male. The case is still under investigation by the police.

As part of her speech, Nicholson addressed Annex B, a policy which permits the placement of patients into wards of the sex categorization with which they self-identify, rather than according to their biological sex status.

The policy states that accommodations must be made for so-called “transgender” individuals “according to their presentation: the way they dress, and the name and pronouns they currently use,” disregarding their actual sex.

“The result of Annex B is that hospital trusts inform ward sisters and nurses that if there is a male, as a trans person, in a female ward, and a female patient or anyone complains, they must be told that it is not true — there is no male there,” Nicholson explained. “I think it is completely wrong that the National Health Service should be instructing or allowing staff to mislead patients — to tell a straightforward lie. It is not acceptable.”

Nicholson complained that although the NHS has a “duty of candour” to be “frank, open and honest with the patients,” still “trust after trust has informed its staff that they must say the opposite of the truth when this situation arises.”

Calling for Annex B to be scrapped, Nicholson said it “gives priority to trans people over women” and so threatens the “dignity, privacy and safety” of female patients. “In place of sex-based rights, we are giving priority rights to one special section of society.”

Speaking on GB NEWS on Sunday, Nicholson said that the NHS is delineating conflicting parameters regarding patient care, on the one hand requiring single-sex accommodation in official documents while on the other accepting men who identify as women into women’s wards and vice versa.

At the very least, Nicholson said, the single-sex policy is about “patient safety, patient dignity, and patient privacy,” but since 2010, with the introduction of the Equalities Act, “the whole thing flipped.”

Hospital staff told police a patient was not raped on one of their wards as the alleged attacker was transgender, despite there being CCTV evidence that shows the assault.

Baroness Nicholson, who raised the incident with the House of Lords this week, spoke to Andrew Doyle. pic.twitter.com/hGG7pwZ3NX

“They are instructing the staff to tell an absolute, blatant fib,” she blasted.

In light of the alleged rape, the NHS is said to be reviewing its policies.