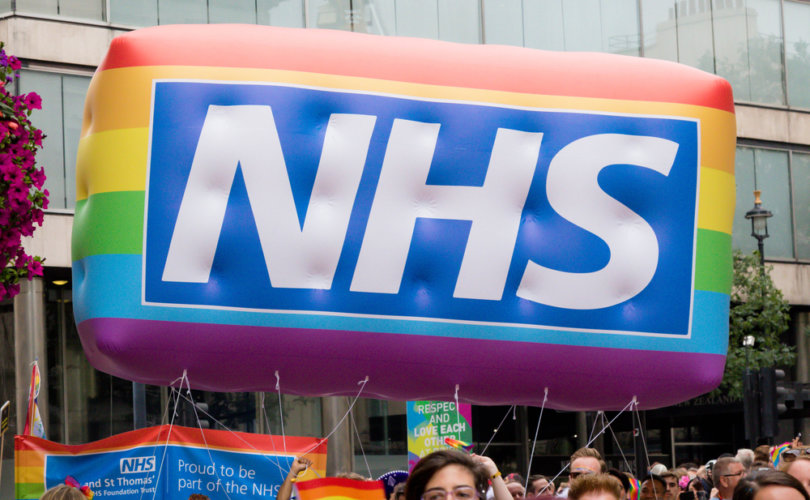 A report in the Telegraph Monday unveiled that the Walton Care NHS Foundation Trust in Liverpool asks “all patients under the age of 60, regardless of how you may identify your gender” if they are pregnant before performing radiotherapy, x-rays, and MRI scans, all of which can be harmful to a developing baby in the womb.

The new measure has apparently been adopted in response to a 2017 change in the law governing the medical procedures during a pregnancy, switching from identifying “females of childbearing age” specifically to cautioning “individuals of childbearing potential.”

The Telegraph said it understands that there are other NHS trusts implementing similar policies in England.

A spokesperson for the hospital said that asking men if they are expecting is “the least intrusive way of ensuring it is safe to proceed,” but at least one woman whose husband was quizzed about being pregnant before receiving a scan for his cancer said it was a cause of “unnecessary confusion and agitation.”

According to the Telegraph, the woman’s husband was not in a fit state of mind owing to “his post-surgical daze” and called the line of questioning “unfair.” She added that “his vulnerability and needs [were] completely ignored.”

Following the revelations, critics were quick to ridicule the move, noting the blatant disregard of basic biology within a profession underpinned by natural science and the misuse of public funds by the social healthcare system.

Campaign group Sex Not Gender Nurses and Midwives, a U.K.-based advocacy group for “an evidence based approach to gender and sex,” posted a list of concerns to its Twitter account following the revelations while describing the policy as “misogyny.”

There are so many concerns here. Our first:
“Heath professionals should be aware of… uterine transplants as a potential for pregnancy”.

This shows disrespect for the complexity of pregnancy. It isn’t simply having a uterus. Misogyny on show, here. https://t.co/ToewPrMmJ7

The group also criticized the Society of Radiographers, which suggests that patients are asked what “sex they were assigned at birth,” arguing rather that medical professionals ought to “practice on evidence.”

“We observe sex. It is not assigned,” the group wrote.

Kat Barber of Sex Not Gender Nurses and Midwives told the Telegraph that implementing measures like those imposed by the Liverpool hospital trust “is an example of why we need both sex and gender clearly recorded for patients.”

As things stand, an NHS patient can simply identify as any sex they like, without the need to undergo a medical examination or provide legal documentation to prove their claim.

“We do not need to ask all patients if they are pregnant. We need to ask females, hence why it is important to know if the person we are providing care for is female whilst also respecting their gender identity,” Barber said.

Tim Dieppe, head of public policy at pro-family legal advocacy group Christian Concern tweeted asking “[w]hat happened to basic biology?” while noting that such a denial of reality “does not inspire trust in the NHS.

NHS trusts ask men if they are pregnant before having scans.
What happened to basic biology?
This does not inspire trust in the NHS.https://t.co/zaJrrAg59Z

Conservative GB News anchor Isabel Oakeshott decried the NHS’ ability to deliver “basic healthcare without being dragged into gender wars.” She added that to “ask men if they’re pregnant before they have scans is a time wasting insult to all concerned” before calling on U.K. Health Secretary Sajid Javid to intervene.

The NHS has enough problems delivering basic healthcare without being dragged into gender wars. Being told to ask men if they’re pregnant before they have scans is a time wasting insult to all concerned. It’s up to Health Secretary @sajidjavid to kill off this nonsense.

In comments made during a visit to an Essex hospital, Javid dismissed the the Walton Care NHS Foundation Trust’s decision to address questions of pregnancy to men as nonsensical, saying he “can’t think of why you would ask anyone that’s a biological male if they are pregnant or have been pregnant.”

“That doesn’t make any sense to me,” he added.

Meanwhile, Sir Kier Starmer — who leads the opposition Labour Party, came under fire earlier this week after stumbling over the question of whether a woman can have male genitalia, ultimately refusing to answer.

“I don’t think that discussing this issue in this way helps anyone in the long run,” Starmer asserted.

In response to comments made last year by Labour minister Rosie Duffield that “only women have a cervix,” the Leader of the Opposition said it was “not right” to make such a statement.