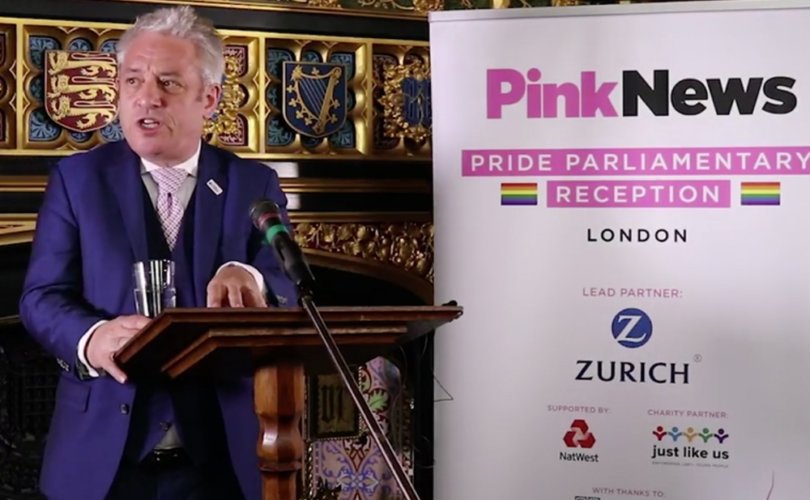 WESTMINSTER, July 6, 2018 (LifeSiteNews) – In the latest and clearest break from the pro-homosexual movement’s past assurances that “gay rights” wouldn’t endanger religious freedom, on Wednesday the speaker of the United Kingdom’s House of Commons explicitly declared that the former should override the latter.

Bercow went on to claim to “respect people’s rights to adhere to and profess their faith,” but asserted that when “somebody’s adherence to faith on the one hand and the acknowledgement of and demonstration of respect for human rights” come into conflict, “the latter has to trump the former.”

“If there are people who take a different view, no doubt they will profess it, but that is my absolutely clear sense,” he reiterated. “The rights of LGBT people of this country and of such people around the world are human rights and need to be acknowledged as such.”

In particular, he singled out the 1988 law known as Section 28 for ridicule as “the single most pernicious piece of legislation in the post-war period.” Repealed in 2003, the law forbade public schools from promoting homosexuality in sex education classes.

Despite his claim that no law more “pernicious” was on the books in the past half-century, racial discrimination in public places was legal in the UK for twenty years after World War II, while current British law permits aborting preborn babies.

Bercow has advocated for the LGBT agenda throughout his nine-year tenure as speaker, and even incorporates a rainbow flag into his official heraldic Coat of Arms. He has also advocated to legalize abortion in Northern Ireland and allow the destruction of embryos for stem cell research, as well as supported measures to mandate explicit sex education for children as young as six, and criminalize pro-life pregnancy centers for advertising the government deems “misleading.”

Across the world, formal legal recognition of homosexuality and same-sex “marriage” has led to numerous attempts to force private citizens, businesses, and organizations to serve same-sex ceremonies, refrain from speech critical of homosexuality, place adopted children with same-sex couples, and more.

In the UK, the collision between LGBT interests and religious or conscience rights has included official “hate crime” guidelines in which mere speech is potentially punishable as long as an alleged victim simply “perceives” hate, a government inspection threatening to close a Jewish elementary school for declining to teach kids as young as three about transgenderism, a proposed total ban on individuals’ ability to seek out therapy for unwanted homosexual attraction, primary schools instructing students to report other children for calling transgender classmates by their biological sex, and more.