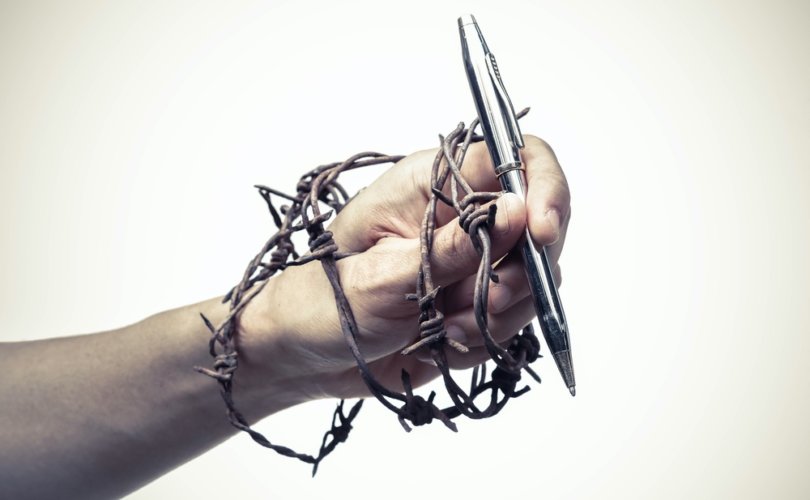 LONDON, England, July 26, 2021 (LifeSiteNews) – Press freedoms in the U.K. could be stripped back by amendments set to be made to the Official Secrets Act that would render it illegal for journalists to publish leaked information regarding the government that is deemed to “not be in the public interest.”

The current Official Secrets Act, last updated in 1989, makes provisions for whistle-blowers who leak sensitive information that they consider to be in the public interest, distinguishing their actions from espionage. Now, a government consultation from the Home Office has suggested a reform to the legislation that will do away with the distinction, essentially treating such journalists and their sources as spies. The Home Office has also proposed a dramatic increase in prison time for breaking the law, going from two years to a possible fourteen years behind bars.

According to the Home Office, headed by Priti Patel, “the scale and potential impact of espionage and unauthorised disclosures has changed significantly since the Official Secrets Acts 1911-89 first became law.” As a result, the government argued that developments in communication and technology pose a “discernible and very real threat” to national security.

The Law Commission, an independent body in Britain which reviews English and Welsh law and periodically recommends changes, began a review process of the Official Secrets Act in 2017, proposing alterations to bring the legislation up to date with advancements in technology and the speed of data transfer.

As part of the proposals offered, the Commission suggested codifying a “public interest defence,” introducing a mechanism whereby individuals who offend against the Official Secrets Act, such as some government whistle-blowers charged with “unauthorised disclosure”, might have a means of justifying their actions in a court of law so that “they may be absolved of criminal liability.” The provision would also protect journalists who receive leaked documents from necessarily being prosecuted.

Patel’s Home Office disagreed with the Law Commission’s assessment, claiming that such a provision would “undermine our efforts to prevent damaging unauthorised disclosures, which would not be in the public interest.” Aware of the implication that journalists might be penalized under the new legislation, the Home Office emphasized “the need to protect privacy, press freedoms and freedom of expression.”

However, the document then explained that the Home Office does “not consider that there is necessarily a distinction in severity between espionage and the most serious unauthorised disclosures, in the same way that there was in 1989.”

Continuing, the Home Office pointed out that “[s]afeguards already exist” for government whistle-blowers “which allow them to raise concerns without needing to undertake an unauthorised disclosure.” However, the “safeguards” are all internally handled within the government. To this end, Victoria Newton, editor of The Sun newspaper (which broke the story last month on former British Health Secretary Matthew Hancock’s adulterous affair, leading to his dismissal and separation from his wife), has defended the press’ right to hold the government to account for wrongdoing.

“We can’t have a democracy where the only place somebody can go to expose wrongdoing is the place where they work because it won’t get exposed, so I’m just staggered really that they thought it was in the public interest to do this,” Newton said on the BBC’s Andrew Marr Show on Sunday.

Some critics of the proposed changes to the Official Secrets Act have suggested that the journalists who exposed Hancock could have been prosecuted if the new law was already in place, given that the report relied on leaked CCTV footage of the former minister, according to the Daily Mail.

LifeSiteNews spoke to David Kurten, leader of the pro-freedom, anti-lockdown Heritage Party, who lamented the proposed amendment to the Act as another sign that the U.K. “is descending into tyranny under the Johnson regime.”

Kurten condemned the plan for 14-year prison sentences for “embarrassing the government,” adding that there “has never been a need for such a law as this before, and there is no need now.”

The former London mayoral candidate noted how the proposal fits in to “a frenzy of new Draconian laws being created” by the current Conservative administration, “such as the recent Police, Crime, Sentencing and Courts Act which includes 10 years imprisonment for ‘making noise’ or ‘causing an annoyance’ at protests, and the forthcoming Online Safety Bill which will require social media companies to censor ‘disinformation/misinformation’ and ‘content that is lawful but harmful.’”

He added his suspicion that the latter “will be arbitrarily defined, no doubt to include commentators who do not toe the line on the politically correct narrative on COVID-19, experimental injections, and medical apartheid through so-called ‘vaccine passports.’”

In all, the new law will be used “simply to silence criticism of the government as it becomes ever more hypocritical and totalitarian,” he said.

The Home Office stated in its report that the free press “is an integral part of the UK’s democratic processes, as is the ability for individuals to whistle-blow and hold organisations to account, when there are serious allegations of wrongdoing.”

“However, a balance must be struck with safeguarding official information (including national security information), where its compromise could harm the UK, its citizens, or interests, given the unlawful disclosure and/or subsequent publishing of sensitive documents can lead to serious harm in many cases.”

“We are not convinced that the Law Commission’s recommendations strike the right balance in this area,” the Home Office judged.

The report added that journalists prepared to reveal leaked information “will rarely (if ever) be able to accurately judge whether the public interest in disclosing the information outweighs the risks against disclosure.”

In response, Laura Dodsworth, journalist and author of A State of Fear, a book which explores “how the government weaponised fear during the COVID-19 pandemic,” said that “it shouldn't only be the Government that decides what is in the public interest.”

In a tweet from veteran journalist John Simpson, the BBC world affairs editor blasted the Home Office for attempting “to make it a crime for journalists to embarrass the govt by publishing leaked official documents. The maximum penalty would be 14 years in prison. This would put British journalists on a par with foreign spies.”

Priti Patel’s Home Office wants to make it a crime for journalists to embarrass the govt by publishing leaked official documents. The maximum penalty would be 14 years in prison. This would put British journalists on a par with foreign spies.

Later asked if he would be prosecuted were the legislation in place during his early years of reporting on foreign affairs, Simpson responded: “Probably.”

National Union of Journalists (NUJ) general secretary Michelle Stanistreet commented in response to the proposed legislation that her organization will continue “to defend journalists and journalism that operates in the public interest… We remain fundamentally opposed to any moves by the state that would make it harder to report on national security or poses harsher penalties for journalists, their sources and whistle-blowers.”

Another spokesman for the NUJ added that the union “strongly believes that if the Official Secrets Acts are repealed with no public interest defence, it would have a chilling effect on public interest journalism and a consequential and detrimental effect on all UK citizens.”

“The proposals as they stand will have a detrimental impact on press freedom.”

A Home Office spokesman said that it “is wrong to claim the proposals will put journalists at risk of being treated like spies and they will, rightly, remain free to hold the government to account.”

“We will introduce new legislation so security services and law enforcement agencies can tackle evolving state threats and protect sensitive data. However, this will be balanced to protect press freedom and the ability for whistle-blowers to hold organisations to account when there are serious allegations of wrongdoing.”