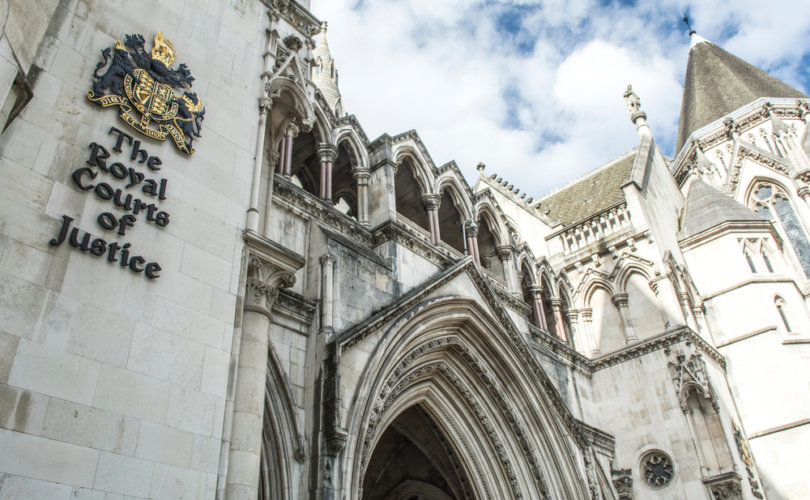 LONDON (LifeSiteNews) — A judge at the U.K.’s High Court ruled that a 20-year-old severely disabled man must receive a COVID-19 jab, despite his parents’ objection that his condition could lead to health complications, including death, following the shot.

20-year-old DC — whose name the judge anonymized — lives with a number of debilitating illnesses which require him to live in a residential home where he can receive care around the clock. Until recently his parents had looked after him full time.

According to court documents, DC suffers from “schizencephaly, microcephaly and cerebral palsy … epilepsy, curvature of the spine, dystonia, and intermittent stridor, as well as pseudomonas of the lungs.”

Owing to these conditions, DC is vulnerable to respiratory illnesses, being admitted to hospital numerous times every year for treatment. He is unable to communicate and considered unable to give informed consent.

DC’s parents determined that the current crop of COVID-19 inoculations is “experimental” and that an analysis of their efficacy proved insufficient to consider giving the shots to their vulnerable son.

Court documentation shows that both parents do not have an ideological objection to the shots, but that their concerns arise from a detailed analysis of the rushed nature of the “vaccine” technology and the data surrounding injurious, and even fatal, effects following use of the jabs.

The court order notes that DC’s father, MC, “looked at figures from around the world, from emerging studies and data,” and was “not satisfied that the vaccine his son is being offered is as safe and efficacious as he (and the rest of us) have been led to believe.”

“He points to concerns over myopathy and other respiratory, vascular and neurological issues that may arise, and about which there is an inadequate database for a decision to be made,” the order continues. “He is particularly concerned about blood clots because there are a number of examples of family members with illnesses due to blood clots.”

Increased risk of dangerous blood clotting has been associated with the COVID shots since they were released to the public at the end of 2020 and beginning of 2021, with many nations pausing use of the shots after blood clot concerns.

Overall, U.K. Yellow Card Reporting, the national vaccine adverse event tracking system, shows a total of 1,445,836 adverse reaction reports following reception of the COVID jabs, 1,996 of which have been fatal.

Having consulted the available information regarding adverse effects, DC’s mother, AC, was said to express a concern that “administering this vaccine might send [DC] into ill health from which he will not recover.”

The parents thus requested that Burrows not order their son’s inoculation, but instead order a blood sample to be taken to determine whether he already has natural immunity.

The judge wrote that a physician speaking on behalf on the Clinical Commissioning Group (CCG) overseeing DC’s care was of the view that “the taking of blood in order to carry out such a test would be more traumatic than administering the vaccine, and so it was not something that he would advise or offer.”

The doctor added that “the official line on natural immunity is that the vaccine is better.”

However, numerous studies over the course of the coronavirus crisis have clearly demonstrated the powerful and lasting immunity against COVID-19 offered by natural immunity, outstripping that given by multiple doses of the currently developed “vaccines.”

Indeed, a new study released January 19 by the U.S. Centers for Disease Control and Prevention (CDC) acknowledges that natural immunity from prior COVID-19 infection provides stronger protection against the virus than the COVID shots.

The seven-month study found that those who had received the jabs in California and New York had lower rates of first-time infection by a factor of 6.2 in the former region and 4.5 in the latter than the unvaccinated who had never before had COVID.

On the other hand, the un-jabbed with natural immunity had infection rates 29 times lower in California and 4.7 times lower in New York. Those who had both vaccination and prior infection had lower rates still.

To this end, renowned internist and cardiologist Dr. Peter McCullough, M.D., testified in a Texas court last year that “[p]eople who develop COVID have complete and durable immunity … You can’t beat natural immunity.”

However, on January 31, Burrows determined “on fine balance that it is in DC’s best interests to receive the vaccine and boosters.”

The judge expressed hesitation “to go against DC’s mother’s instinct and his parents’ analysis” and acknowledged that they “will be distraught” with the decision.

Nevertheless, he described being “persuaded that without the vaccine he [DC] is at risk of COVID-19 causing him much greater harm than if he has it.”

After recognizing that there are “risks associated with the vaccine,” Burrows said that he was “satisfied on the basis of the CCG’s evidence that those risks do not outweigh the advantages.”

The judge added that, above the supposed health advantage of the jabs, his principal reason for allowing DC to be jabbed against his parents’ will is to increase DC’s “enjoyment of life by allowing him to be more involved in the life of his care home and with his parents.”

Without being jabbed, DC was prohibited from participating in outdoor events and was forced to isolate in his room for ten days following family visits.

“If DC were able to make a decision for himself, I am satisfied that would be a magnetic factor for him,” Burrows asserted.

A lawyer for the case requested permission to appeal Burrows’ decision, but was denied.