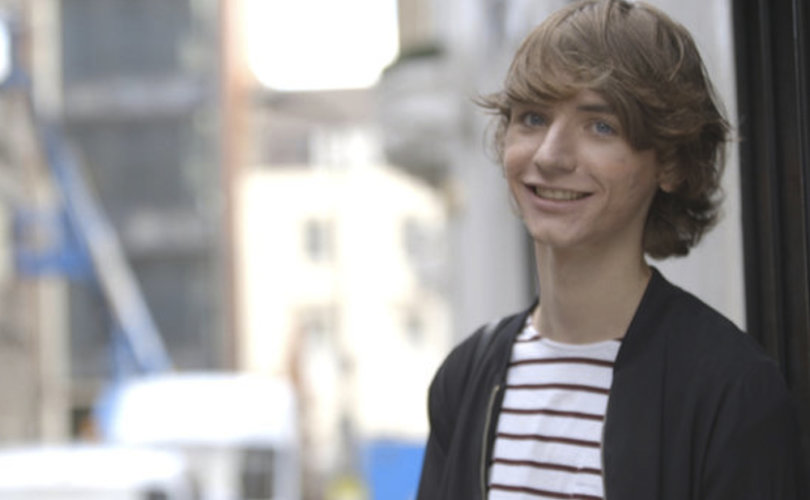 Liam Madigan challenged St. Simon Stock Catholic School in Kent, England, after he was told not to dress as a girl. The school eventually relented and apologized.

UNITED KINGDOM, October 27, 2016 (LifeSiteNews) — A British judge has ordered that a seven-year-old boy remain in his father’s custody after living as a girl for two years while in his mother’s care.

Justice Hayden said the mother was convinced the boy thought he was a girl, causing him emotional harm. He also criticized social workers for ignoring concerns about the youth’s welfare but praised the boy’s Catholic school for recognizing the mother’s efforts to persuade her son that he was a girl.

Hayden’s ruling suggests that the private Christian schools who have been giving in to students demanding the right to cross-dress and be treated as the opposite sex have the power to resist. The latest to surrender in another case, St. Simon Stock Catholic School in Kent, did so after the student got a lawyer.

“They shouldn’t capitulate,” urged religious rights champion Andrea Williams, the founder of the Christian Legal Centre. “Such a school has a perfectly lawful right to its Christian ethos, to its gender-specific uniform code and to its views on what the truth is.”

Judge Hayden’s ruling supports Williams’ hope that reason can prevail in court when religious rights conflict with transgender issues. He even-handedly reviewed the evidence from many qualified observers, indicating the mother was mentally ill and the boy an unwilling victim who thought of himself as a boy and not a girl.

But by believing that her son was transgender, by claiming he had been diagnosed as such so forcefully that social workers were persuaded without checking and by fending off objective professional assessments, she managed to have her way for several years.

Hayden states that the “profile and sensitivity” of transgenderism “blinded a number of professionals from applying their training, skill, and, it has to be said, common sense.”

As for the boy’s Catholic school staff, who raised their concerns that he was being neglected by his mother in terms of basic hygiene at the same time she insisted he was a girl, Hayden described their actions as “well-reasoned, thorough, and an impressive example of appropriate safeguarding.”

But child welfare authorities ignored the school because the mother said “they were Roman Catholics” – with discredited views on transgenderism.

Hayden was so dismayed by this “rather crass cultural and religious stereotyping” and by the other weaknesses in the official response that he has ordered an investigation.

“Professional deficiencies to this extent cannot go unchecked, if confidence in this local authority's safeguarding structures is to be maintained.” The judge had already ordered the boy into his father’s custody months ago and this has resulted in improvements in social behavior and growing indications of masculinity.

The father, who had been denied contact with his son for two years by the mother, is proving be a model parent and is now attempting to secure permanent custody.

Meanwhile, St. Simon Stock Catholic School also showed sound reason in resisting student Liam Madigan’s decision to come to school in March dressed according to the girl’s dress code. The staff told him he could either dress as a boy, stay home, or find another school.

Unsupported by his parents, he returned to school in boy clothing for a while and then hired a lawyer. But once the school received a letter from his attorney, it agreed to let him attend as a girl and even apologized. It read in part, “It was never anyone’s intention to cause hurt; on the contrary, St. Simon Stock staff and the pastoral team in particular, have always wanted to support you on this important journey.”

The school might have been influenced by a petition supporting Madigan signed  by some 200 students.

But the school administrators failed to follow the directive of Shrewsbury Bishop Mark Davies urging schools to oppose the “radical ideological challenge” of the gender theory behind transgenderism, which says gender is a social construct and is often different from a person’s biological sex.

Williams also calls for resistance. “What we have is the conflict of rights,” she told LifeSiteNews. Because the Equality Act of 2010 is so new, the transgender rights it bestows have not been tested in court against the long-recognized religious rights of schools and individuals.

“The appearance in class of a cross-dressing student could be very harmful to the other students,” she said. “It could also do lifelong damage to the student himself or herself.”

“The law does not require schools to give in to this fad,” Williams added. However, Williams said many Catholic and Anglican private schools were giving in to the trans students’ demands without a fight. “What they should be doing is giving the students help in understanding why they are rejecting the gender with which they are born.”