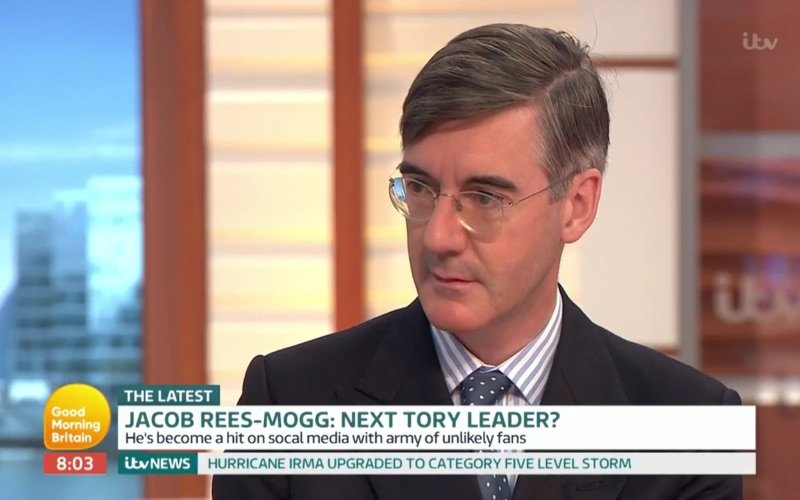 LONDON, England, September 7, 2017 (LifeSiteNews) – An emerging contender to head Britain’s Conservative party caused a stir when he took a strong stand against abortion and gay “marriage” on national television in the UK this week.

Jacob Rees-Mogg said abortion was “morally indefensible” and he was personally opposed to it even in cases of rape and incest. Rees-Mogg said as well that he supported the Catholic Church’s teaching on marriage.

The Conservative Member of British Parliament identified himself as a Catholic in an interview with Piers Morgan and Susanna Reid on the Good Morning Britain television program and said repeatedly that he supports the teaching of the Church.

“I’m a Catholic and I take the teaching of the Catholic Church seriously,” Rees-Mogg responded when asked if he supports same-sex “marriage.” “Marriage is a sacrament and the decision of what is a sacrament lies with the Church and not with Parliament.”

Rees-Mogg’s comments follow Liberal Democrat leader Tim Farron’s resignation as party chief earlier this year after waffling at first when asked whether he thought homosexuality was a sin.

The Conservative MP did acknowledge to Morgan and Reid that he voted against gay “marriage.”

However, he wavered some by carefully differentiating between civilly legalized gay “marriage” and marriage as a sacrament under the authority of the Church. He also made a point of saying the same-sex “marriage” issue is not something that would be decided by a political party or the prime minister.

Further, when asked if he thought gay sex is a sin, Rees-Mogg also emphasized that it was not his place to judge what other people do. He also referenced gay “marriage” as a private issue.

Still, Rees-Mogg’s forthright support for Church teaching was to some extent unique for a Catholic politician today, certainly one in contemporary British politics. It drew attention because he’s said to be a possible replacement for Theresa May as party leader.

The Conservative MP is known for his old-fashioned views and courtesy. He has emerged as a dark horse favorite to lead the party with May on shaky ground after last year’s Brexit upset and many desiring a return to proper conservatism.

In spite of Rees-Mogg’s traditional beliefs, “The Telegraph reported, there are those who think he would be a good replacement for May as Prime Minister.

He told the morning TV hosts he was a backbench MP — a status not typically in the running for leadership — and “in the history of the Prime Ministership [the job] has never gone to a backbench MP.”

Rees-Mogg said he supported May and wanted her to remain as head of the party, and while the MP said he was 99 percent sure he would not be Prime Minister, he did not completely rule it out.

The father of six was stronger in his responses on abortion in the Good Morning Britain exchange.

Morgan challenged Rees-Mogg over the variance in the degree of opposition in his responses between same-sex “marriage” and abortion, when both are based on Catholic teaching.

Rees-Mogg said it was different because same-sex “marriage” involves something people are doing with themselves, whereas with abortion it is “something that is done to the unborn child, and therefore it is different.”

“Yes I am,” he responded when asked if he completely opposes abortion in all circumstances, persisting when given the example of rape and incest exceptions.

“I’m afraid so,” Rees-Mogg said, “life is sacrosanct, and begins at the point of conception.”

When posed the question of whether a woman raped by a family member should have the right to abort the baby, Rees-Mogg stated, “My personal opinion is that life begins at conception and abortion is morally indefensible.”

Rees-Mogg shared a video of the interview on his Facebook page, commenting, “et unam sanctam catholicam et apostolicam ecclesiam” (Latin for and [in] one holy catholic and apostolic church).

“Mr. Rees-Mogg is entitled to his opinion,” a Marie Stopes International spokesperson said. “It does nothing to change the fact that women in the UK have benefited from access to safe and legal abortion for 50 years, and will continue to do so.”

“The views expressed by Jacob Rees-Mogg today clearly illustrate that not only is he unsuitable for high office, but he is also totally out of kilter with the modern Conservative Party,” Matthew Green, chairman of LGBT+ Conservatives, told the UK gay magazine Attitude. “Views like these only serve to cement his unenviable reputation as the honorable member for the 18th century.”

Freddy Gray, a blogger for The Spectator, remarked that it takes courage to say you oppose same-sex “marriage” on national TV.

“Most voters (unlike most journalists) can see the difference between someone who hates gays and somebody who accepts his religion’s teaching,” Gray wrote.

He said as well he wasn’t so sure Rees-Mogg’s strong pro-life conviction would necessarily quash his chances for parliament leadership. Britons can see Rees-Mogg is a man of principle, Gray said, something lacking in Westminster politics.

Catholics received Rees-Mogg’s statements on abortion and gay “marriage” positively albeit with reservation in some cases.

“Must watch,” Deacon Donnelly said. “This should give heart to all true English Catholics.”

The Society for the Protection of Unborn Children (SPUC) praised Rees-Mogg’s comments.

“It's great to see a politician making an unequivocal stand for the right to life of the unborn, and we thank him for his bravery and integrity,” Alithea Williams, SPUC communications officer, told LifeSiteNews.

“Hopefully, Mr. Rees-Mogg's recent surge in popularity means that the logical, consistent pro-life position he put forward — that life begins at conception, and abortion cannot be justified even in very difficult situations such as rape — will reach and resonate with large numbers of people,” Williams said.

“Rees-Mogg is refreshing and says things other people are thinking,” Shaw told LifeSiteNews, but he is not a serious candidate for the leadership. Shaw said the MP’s support derives from reaction to the poor quality of the current crop of leaders and the political correctness that characterizes their views.

Shaw said it was a serious mistake for Rees-Mogg to distinguish abortion and same-sex “marriage” on the basis that gay “marriage” is a private matter and abortion one of public justice. He also took issue with Rees-Mogg‘s appeals to Church teaching as though these issues were a matter of ecclesiastical law or faith, as opposed to natural law.

“However, he's not a theologian or a philosopher,” Shaw said, “so perhaps we should give him credit for admitting he has Catholic views at all.”