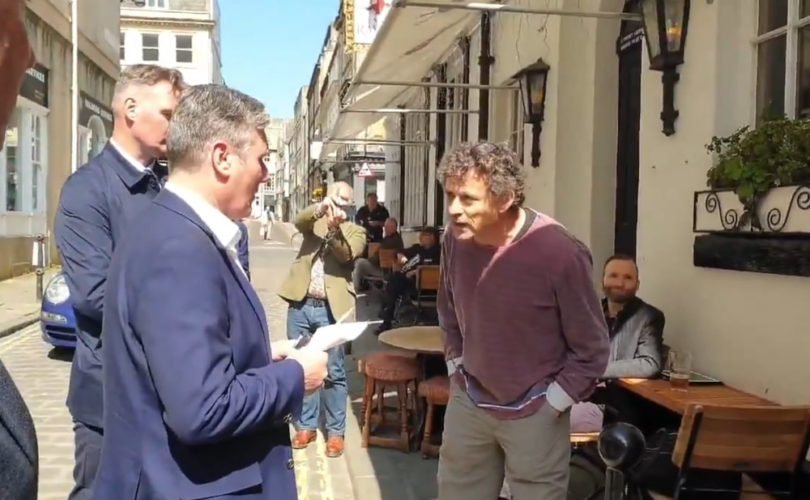 BATH, U.K., April 21, 2021 (LifeSiteNews) — The U.K.’s opposition leader has been thrown out of a pub after the landlord stated that “thousands of people have died because you have failed to do your job” by opposing COVID-related restrictions.

Sir Keir Starmer, the head of the Labour Party and of Her Majesty’s opposition in government, was conducting a walkabout visit of local stores in Bath yesterday, which included The Raven pub. Accompanied by the Labour mayoral candidate for the West of England, Dan Norris, Starmer was accosted by the publican and landlord of the The Raven, Rod Humphris.

Humphris described himself as “incandescent” over Starmer’s support for the Conservative government’s COVID lockdowns and severe restrictions.

“Do you understand we have f—ed our economy because old people are dying?” asked Humphris. “The last time we had this much death was 2008.”

Keir Starmer is told to leave the Raven. The team ducked inside after a confrontation pic.twitter.com/UujAx8gnbd

Starmer has been a consistent and firm supporter of lockdowns in the nation, and despite the U.K. having endured three economically devastating national lockdowns and constant restrictions in-between, he recently re-affirmed his support for the measure.

Speaking on LBC radio, Starmer mentioned that his “default position” would be to support the government in extending lockdown powers.

On the occasions that Prime Minister Boris Johnson has allowed Parliament to vote on approving and extending the lockdown restrictions, Labour has abstained, meaning the restrictions were passed due to the majority of conservative MP’s who refused to dissent from their own party line.

“You have failed this country,” accused Humphris.

“I disagree,” Starmer responded. He then attacked Humphris, saying, “I really don’t need lectures from you about this pandemic.”

After attempting to enter the pub, Sir Keir was swiftly ejected by the irate publican, who despite being tussled by the politician’s security, shouted, “That man is not allowed in my pub. Get out of my pub!”

In a conversation with LifeSiteNews, one individual expressed his support for Humphris: “It’s a great pub, great atmosphere, great beer. I am very sorry to think that he and so many other landlords have suffered over the last year. The political class have contempt for us, as shown by Starmer saying that he was ‘lecturing’ him.”

In comments to the media after his unceremonious dismissal, Starmer claimed that the “vast majority” of people supported the COVID-19 restrictions.

As for the landlord’s opposition to lockdown measures, Starmer stated that “I profoundly disagree.”

Rod Humphris subsequently made his own media rounds, affirming his decision to eject Starmer from the pub: “In my opinion, the way we’ve handled the pandemic, this virus, has overwhelmingly impacted the old, young, vulnerable and poor. If anyone is standing up for them, it should be him [Starmer] and he’s utterly failed to do it.”

However, Labour described Humphris’s views as “dangerous misinformation,” despite the publican drawing from official figures released by the Office for National Statistics when confronting Starmer.

The event has swiftly and widely swept through the British media, and Starmer has garnered considerable ridicule on social and traditional media.

The footage prompted an opinion piece in The Telegraph to comment, “To say Starmer was like a fish out of water would be to do an injustice to the levels of elegance achieved by gasping salmon on riverbanks.”

Former Supreme Court Justice Lord Jonathan Sumption also weighed in against Starmer, warning of the sinister lack of readiness to answer Rod Humphris’s legitimate questions about the efficacy of lockdowns.

“When democracy becomes a mechanism for mass coercion by governments, with the approval of the opposition, it is surely heading towards its end,” wrote Sumption.

While Starmer’s ejection from a business seen as the center of most towns or villages in the country — namely a local pub — is unlikely to cause any change as to his own support for lockdowns, it demonstrated the level of public opposition to lockdowns, particularly from business owners who have been hardest hit by the measures.

Pubs and restaurants have only just re-opened on April 12, for outdoor service only, after having been forced closed by the national lockdown beginning January 5, 2021. Assuming the government keeps to its own schedule, hospitality and eateries will not be permitted to welcome customers inside for service until May 17.

But Starmer is not alone in being denied a pint due to his lockdown support. Welsh First Minister Mark Drakeford has been banned from over 100 pubs, due to his own impositions upon the country. In an open letter published by the West Conwy Pubwatch group, Drakeford was informed that he was barred from entering premises overseen by the group, until May 30, 2022, or until a review which was to be held in August 2021.

Should he ignore the ban, the pub owners would call police to escort the politician from the premises.

Despite the U.K. government’s relentless public “propaganda” messages, opposition to the lockdown restrictions is considerably high, and protests have been a regular occurrence since last summer, especially in cities such as London or Manchester.

Last month, as part of a global movement to express opposition to the lockdowns, members of the British public gathered in cities as a public protest, despite the threat of police violence which had been regularly seen at anti-lockdown events previously.

Attendees at the march in the capital city of London suggested that it was the biggest protest march seen, with numbers reckoned by the tens of thousands, and even up to 100,000.

Another large anti-lockdown protest is due to take place in London, and various cities across the nation, on April 24.