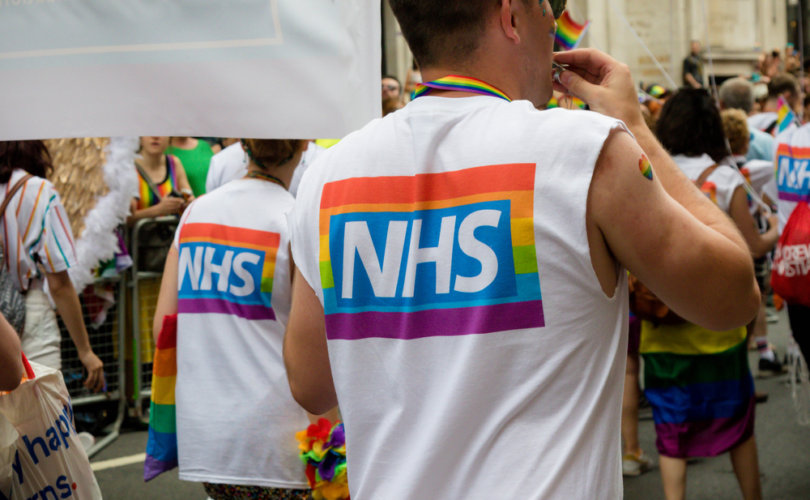 (LifeSiteNews) – A British man is suing the taxpayer-funded National Health Service (NHS) after claiming that doctors did not warn him of the full effects of having his genitals removed as part of his “gender reassignment” surgery, the Daily Mail reported.

The man, who is in his thirties and in the process of “de-transitioning,” revealed his struggle with his identity and subsequent surgical trauma in a series of tweets June 13, explaining to his 20,000 followers that he was a “vulnerable adult” when, age 26, he was convinced to undertake a life-changing “transgender” drug regimen.

It’s happening. We’ve also got the hugely brave @TullipR suing the NHS over medical negligence, saying doctors did not warn him of the drastic outcome of the body-altering surgery which has left him infertile, incontinent and feeling like a ‘sexual eunuch’https://t.co/v4HiBbFchx

“I had a lot of complex issues that I was begging to be addressed, but I was affirmed [in]to being trans instead,” said the man, who writes under the pseudonym TullipR.

Initially the man purchased female hormone drugs privately, but was later prescribed the pills by his doctor and an NHS-run “gender clinic,” according to the Daily Mail. An NHS psychiatrist then proposed that he consider surgery.

Five years ago, he took the next step, opting to undergo irreversible “penile inversion with scrotal graft” surgery.

“Eventually I found myself on the operating table. Immediately on waking up from surgery, I knew I had made the biggest mistake of my life. My sex had been lobotomised.”

He detailed the permanent outcomes of his surgery which have led to infertility, incontinence, and a lack of sensation, all of which he said has made him a “sexless eunuch.”

Stephanie Davies-Arai, founder of pro-family group Transgender Trend, a group which has raised the alarm “about the medical transition of children and young people,” said that she thinks TullipR “has a very real case for compensation against the health service,” adding that the organization believes “he has suffered harm.”

“It is hoped this will force a re-think by the NHS about this kind of barbaric surgery on patients who are told by medics it will help them,” Davies-Arai said.

The case has been taken by a legal team in Liverpool, in the northwest of England, who are expected to argue that the NHS did not sufficiently counsel TullipR to the outcomes of the surgery before placing him under the knife.

— Article continues below Petition —
PETITION CONGRESS: Stop the grooming & sexualization of children in schools
Show Petition Text
6972 have signed the petition.
Let's get to 7500!
Thank you for signing this petition!
Add your signature:
Show Petition Text

“I want to tell everyone what they took from us, what irreversible really means, and what that reality looks like for us,” TullipR said on Twitter earlier this month. “No one told me any of what I’m going to tell you now.”

I want to tell everyone what they took from us, what irreversible really means, and what that reality looks like for us.

No one told me any of what I’m going to tell you now.

“I have no sensation in my crotch region at all. You could stab me with a knife and I wouldn’t know. The entire area is numb, like it’s shell shocked and unable to comprehend what happened, even 4 years on,” TullipR wrote.

Another unexpected result has been difficulties when going to the bathroom. “It takes me about 10 minutes to empty my bladder, it’s extremely slow, painful and because it dribbles no matter how much I relax, it will then just go all over that entire area, leaving me soaked,” he said.

“So after cleaning myself up, I will find moments later that my underwear is wet – no matter how much I wiped, it slowly drips out for the best part of an hour. I never knew at 35 I ran the risk [of] smelling like p*** everywhere I went,” he lamented.

“Now I get to the point where I’m de-transitioned and the realisation that this is permanent is catching up with me.”

“During transition, I was obsessive and deeply unwell,” TullipR stated, adding that he “cannot believe they [the NHS] were allowed to do this to me, even after all the red flags.”

TullipR said that his doctors dismissed concerns that he had raised with them following the surgery and told him that there were no options for those who changed their mind.

LifeSiteNews reached out to TullipR for further details about the lawsuit, but he was unable to share any more details at this time.