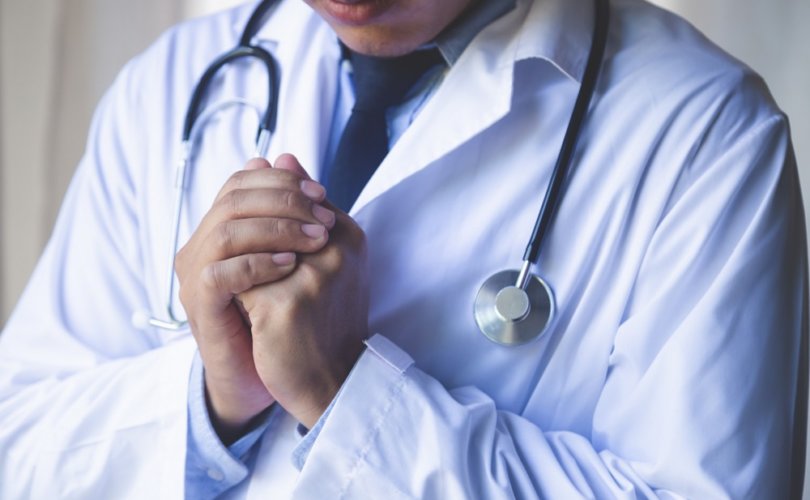 December 9, 2019 (LifeSiteNews) — A Christian doctor has been vindicated after a concerted and targeted attack against him by a secularist campaign group was thrown out by the General Medical Council (GMC). The GMC ruled that there was no evidence and that the doctor had not done anything wrong.

The outcome of this case gives reassurance to Christian doctors and professionals across the UK. It also provides guidance on how they can share their faith in the workplace without fear of losing their jobs.

In June 2019, the GMC wrote to Christian G.P. Dr Richard Scott, 59, that it had received “some information” from the National Secular Society (NSS) and would begin a fitness to practise investigation into him.

The NSS, targeting Dr Scott to get him de-registered, had lodged a complaint expressing “concern” that he was “continuing to pray and promote Christianity during consultations in an attempt to convert patients”, and cited an anonymous complainant.

However, after an investigation lasting three months, the GMC concluded that there was no case to answer, stating in a letter to Dr Scott:

The GMC clarified that Dr Scott’s medical practice “states that the majority of the Partners are Christians and that this faith guides the way in which they view their work.” For the future, the GMC has advised Dr Scott to document any discussions of faith that he has with his patients and that prayer must only be offered within the guidelines of the GMC’s explanatory guidance on personal beliefs and medical practice.

In their letter to the GMC, the NSS had claimed that they were contacted “by a member of the public who was concerned because an acquaintance whom she describes as “highly vulnerable” is being treated at the practice” and claimed that the patient “does not feel able to express discomfort at the use of prayer.”

The NSS letter also cited a BBC Radio 4 interview aired in January 2019 entitled “The Battles That Won Our Freedoms: 3 Freedom of Religion,” claiming that Dr Scott was ignoring GMC guidelines “that preaching to patients is in direct conflict with paragraph 19 of the GMC’s supplementary guidance: Personal Beliefs and Medical Practice and paragraph 33 of Good Medical Practice.”

This NSS complaint had followed Dr Scott receiving a highly irregular warning in 2012 for sharing his faith with a patient, despite the GMC’s own Good medical practice guidance recommending that medical histories should take account of “spiritual, religious, social and cultural factors.”

Responding to the outcome, Dr Scott, who has been supported by the Christian Legal Centre, said:

This complaint should never have got to this stage. It was clear from the outset that the NSS was targeting not just me and the practice, but also the freedom of Christian professionals across the UK to share their faith in the workplace. The toll placed on my family and me, as a result of one spurious complaint, was totally unnecessary. Yet it is my hope that this outcome will mean other Christian practitioners will not have to go through similar experiences.

The outcome of this case not only gives reassurance to Christian doctors and professionals across the UK that they can share their faith in the workplace, but also clear guidance on how they can share it without fear of losing their jobs.

The agenda of the National Secular Society to remove Christian witness from the workplace is clear. Yet this guidance from the GMC should now provide more protection, allowing doctors, like Richard, to get on with their jobs without fear.

Dr Richard Scott is a brilliant doctor, loved and respected in his community and especially by his patients.  It is because of his Christian faith that he is motivated to look after the person well beyond the consulting room.