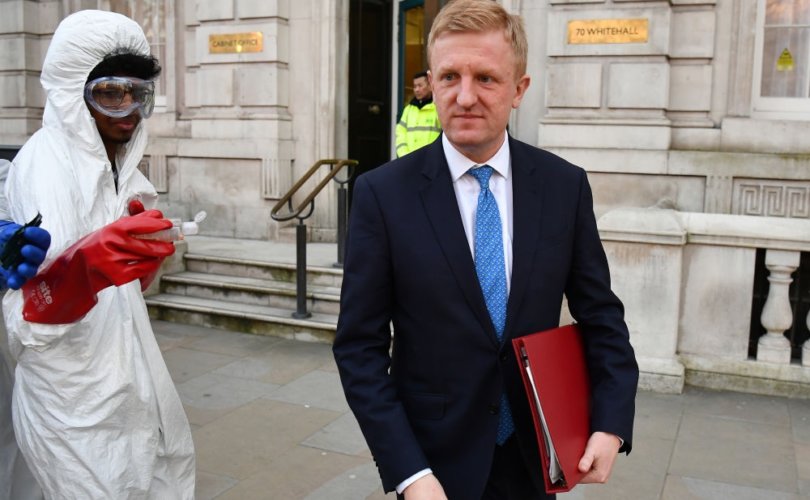 WESTMINSTER, England, March 22, 2021 (LifeSiteNews) –The British government has announced that it is considering the introduction of a “COVID certification” system, but said that the system “won’t be a vaccine passport.”

In an interview on Sky News, the U.K.’s Culture Secretary Oliver Dowden said that COVID certification could be used to “facilitate the return of sports … the return of things that we love.”

Culture Secretary @OliverDowden tells @skygillian that govt is considering 'COVID certification' to help facilitate the return of sporting events by “proving people have had a vaccine”, but says “there won't be a vaccine passport”.

When asked to explain the difference between COVID vaccine passports and COVID certificates, Dowden answered: “We are working through those details.”

“We’ve been clear that there won’t be a vaccine passport, the Prime Minister has made that very clear,” Dowden said.

“What we have said though is that in order to prove, for example, that you’ve had a vaccine or that you’ve had a successful negative test … we’re looking at ways to help facilitate proving that. And that [a certificate] may be one of the things that could help ensure that we can get more people back into stadiums,” Dowden said.

No details were given on how the system would work, or how it would be enforced, with Dowden saying only that “those are certainly legitimate questions.” Instead, he stressed the government’s apparent focus on “trying to get the conditions right” to ensure a “permanent reopening.”

Dowden explained that “things like one-way systems, things like masks, things like hand hygiene and everything else” will still be required alongside the possibility of having to prove one’s COVID status with a certificate. Yesterday Dr. Mary Ramsay, Public Health England’s head of immunisation, said that measures such as masks and social distancing could remain in place for “a few years.”

As things stand, no final decision has been made by the government to move forward with the certificates, and the proposal has been made available for public consultation.

Another COVID u-turn from the UK government

The announcement is the latest example of the U.K. government contradicting its previous announcements regarding COVID policy.

Zahawi said twice during the debate that “we have no plans to introduce so-called vaccine passporting,” adding that he urged businesses “not to even think about that.”

On the subject of mandatory vaccines, the minister even expressed strong opposition to the idea, calling it “completely wrong.” “Mandating vaccinations is discriminatory and completely wrong,” Zahawi declared.

But just weeks later, in January, the government announced a trial of two COVID-19 vaccine passports, committing £75,000 from the public purse towards the project.

Zahawi later suggested that the government would effectively give businesses the freedom to impose vaccine passports if they wished. “It’s up to businesses what they do, but we don't yet have the evidence of the effect of vaccines on transmission.”

At the same time U.K. Foreign Secretary Dominic Raab, commenting on the possibility of nationwide use of vaccine certification to enter pubs and supermarkets, said it was “something that hasn’t been ruled out. It is under consideration. But of course you’ve got to make it workable.”

Last year Johnson referred to opponents of vaccines as “nuts” and Health Secretary Matt Hancock called on politicians to “stand shoulder to shoulder” against those who “are threatening lives” by opposing vaccines.

Meanwhile, in Israel, where COVID vaccine passports have been made mandatory for entry to restaurants, shopping malls, hotel and leisure facilities, local citizens have already been experiencing a sharp class divide between those who have been vaccinated and thus have a “green pass,” and those who do not.

“They’re making this green passport where half the population cannot get into theatres or malls or all sorts of things unless you have taken the vaccination. They are creating a medical Apartheid,” Daniel said.

A few weeks after implementing its “green pass” vaccine passport scheme, Israeli authorities began clamping down hard on vaccine refusers, going so far as to enact a law permitting the government Health Ministry to share with other authorities, such as local government, the details of people who have not taken a coronavirus vaccine. The law is supposed to “encourage” uptake of the vaccine.