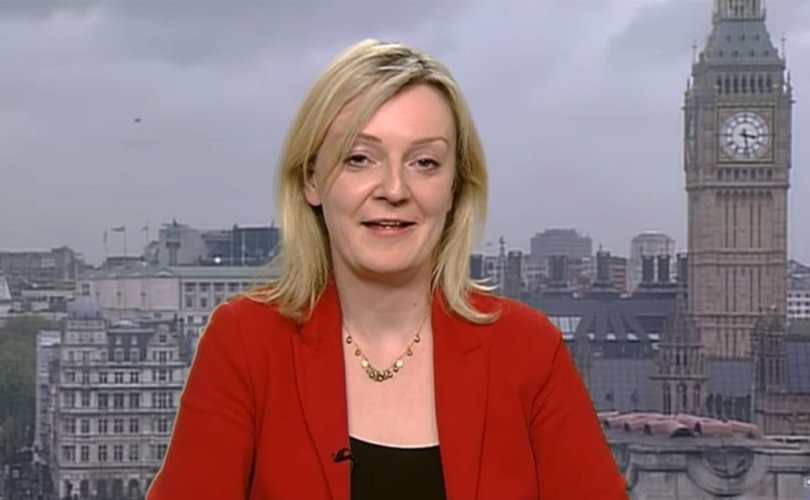 UNITED KINGDOM, April 23, 2020 (LifeSiteNews) — The U.K. equalities minister, Liz Truss, has suggested that the government may take measures to prevent children confused about their sex from harming themselves through so-called “gender transition treatment.”

In a speech given to the Women and Equalities Committee via video link Truss also said that “the protection of single-sex spaces … is extremely important.”

Truss made the comments while announcing that the government’s reform of the U.K.’s Gender Recognition, which allows people who have gender dysphoria to change their legal gender, will be made this summer.

“We’ve been doing a lot of work internally, making sure we’re in a position to respond to that consultation and launch what we propose to do on the future of the Gender Recognition Act. We will be in a position to do that by the summer, and there are three very important principles that I will be putting in place,” she said.

“First of all, the protection of single-sex spaces, which is extremely important. Secondly, making sure that transgender adults are free to live their lives as they wish without fear of persecution, whilst maintaining the proper checks and balances in the system,” the equalities minister continued.

“Finally — which is not a direct issue concerning the Gender Recognition Act but is relevant — making sure that the under-18s are protected from decisions that they could make, that are irreversible in the future.

“I believe strongly that adults should have the freedom to lead their lives as they see fit, but I think it’s very important that while people are still developing their decision-making capabilities that we protect them from making those irreversible decisions,” Truss added.

The Independent reports that Stonewall, a U.K. LGBT activist group roughly equivalent to the Human Rights Campaign (HRC) in the United States, has demanded talks with the minister.

Dr. Tom Rogers, education outreach manager for U.K. pro-life group the Society for the Protection of Unborn Children (SPUC), told LifeSiteNews that the organization “welcome this indication of a change towards the direction of sanity, and away from certain extremes of the previous Conservative administration’s LGBT fanaticism, under Teresa May.”

“Any measures to protect children from being influenced into making such catastrophic life-destroying decisions is a good thing,” Rogers said.

“However, children will continue to be victims of Government policy whilst they remain exposed to the imposition of harmful LGBT propaganda at school.

“Parents need to be empowered again to protect their children by restoring their right of withdrawal from compulsory Relationships & Sex Education, and children desperately need further protection from the LGBT extremism that has for many infiltrated almost the entirety of their school life and curriculum,” he continued.

Rogers added that transgenderism and “sex change,” including for adults, should “never have the official sanction of public policy.”

“Many vulnerable adults also are burdened with deep regret over the devastating changes to their bodies they’ve been encouraged to make. For those with psychological problems concerning their sexual identity, the emphasis should always be on helping such people back into a fulfilling acceptance of the biological sex that God has blessed them with,” he explained.

“‘Changing genders’ is never just a private matter but a public declaration of falsehood which, as we’ve seen, results in a distorted rights agenda that affects the whole of culture and society, and puts children at risk.”

In January, a young woman in the U.K. who has given up her attempts to “become” a man joined a lawsuit against the state-funded health center that supported her so-called “gender transition treatment.”

And just last month, parents in the U.K. accused teaching staff of secretly brainwashing their 13-year-old daughter to think she is a boy through one-on-one sessions of which they were not informed.

LifeSite’s Jonathon van Maren has recently speculated how changing societal priorities resulting from the impact of the coronavirus pandemic “could damage the influence of the trans activists.”

“They do not have widespread public support for their most radical demands, they dominate the public discussion with the assistance of the media, and gender ideology is resulting in a massive and dangerous spike in children identifying as the opposite sex,” van Maren commented.

“Trans activists are wreaking havoc on our society, and with a pandemic, a potential depression, and loud cracking sounds emanating from society’s foundations, perhaps people will finally lose patience with their insane demands.”