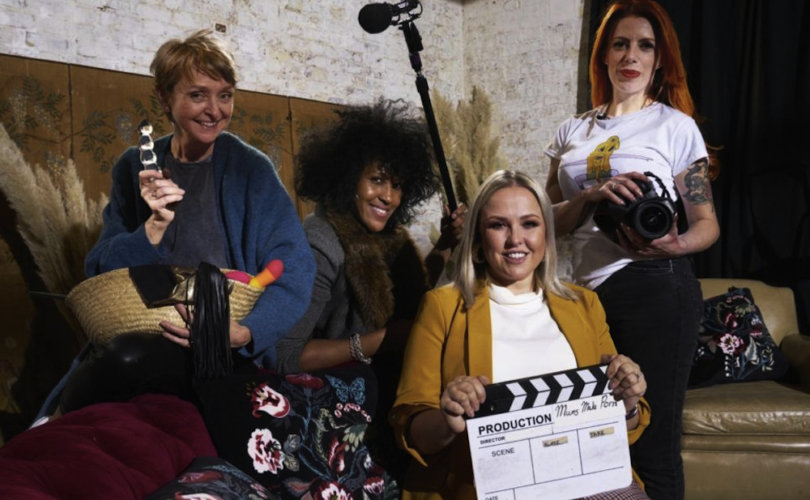 LONDON, March 20, 2019 (LifeSiteNews) — Having found ordinary pornography insufficiently titillating, five women are producing a pornographic video that they want their children to watch in order to allay “toxic masculinity.”

The women, some of whom have children, watched pornographic videos as part of their research. According to the Daily Mail, one of them vomited when she viewed some of the horrifying material and another mother was disgusted by the rapes she saw in the videos. The five mums viewed scenes of violence, submission, and denigration.

While the five women do not appear in the video they directed and produced, they reportedly sought to produce pornography they believe will promote their attitudes toward sex. At the end of the program, the women showed the pornographic video to their children.

The three-part series follows Anita, Emma, Sarah Louise, and Sarah as they made their pornographic video.

Beautician Sarah Louise has six children and lives in Bolton. Sarah, a 40-year-old wedding photographer from North Wales, wept when she viewed rapes as part of the research.

On the program, she said, “If that was the first time I’d seen anything about sex, I’d be petrified. I just thought all of a sudden that I was going to throw up.” She said she would beat her son if he ever treated a woman as badly as those she saw in the videos.

Giving her reasons for producing video to her own taste, Sarah told the program, “We need to show kids that there’s something else than this horrible s*** we see on the internet.”

Coming from a feminist perspective, she added that the pornographic industry is dominated by men, “so as a group of women/mums we address our concerns, we provoke conversation into sex education and address topics such as consent, safe sex, and equality.”

Research shows the majority of children have been exposed to pornography before their 18th birthday. In 2007, a survey showed 42 percent of web users age 10 to 17 had seen online pornography during a recent 12-month span. The survey showed 66 percent said they did not want to view the images and had not sought them out. The United Kingdom has made advances toward limiting minors’ access to pornography, as has been noted previously by LifeSiteNews.

A broadcast interview with Emma Morgan, the show’s executive producer, provided insights into the purpose of the program and resulting pornographic video. Morgan said that while she as shocked by the statistics about the damage caused by online pornography on young people, she wants to “draw attention to the issue” with her program.

Sarah Louise said her daughter expressed fear that if her boyfriend should watch pornography her body might suffer by comparison. To counteract the phenomenon, Sarah Louise said it was important for them to show “different body types, diversity and also that there wasn’t a type. You could have different-sized breasts, penis and vaginas. They all look different. I wanted to show there was diversity in appearance.”

Commenting on the news was conservative author Rod Dreher. “This is not a fringe thing. This is mainstream now. It wasn’t too long ago that parents introducing their children to pornography would have drawn the attention of the police. Now parents make it for them as an enlightened act of liberal charity, and get a celebrated television show about it … ” he wrote.

“There is no saving a culture as degenerate as this one, only withdrawing from it, and building up small communities within which to live out the faith (and moral sanity) while it destroys itself. I’m telling you, get started on this right now. Something big is coming. You feel it as well as I do,” Dreher warned.

Dreher argued that her comments are an indication that progressive Christianity has no future.