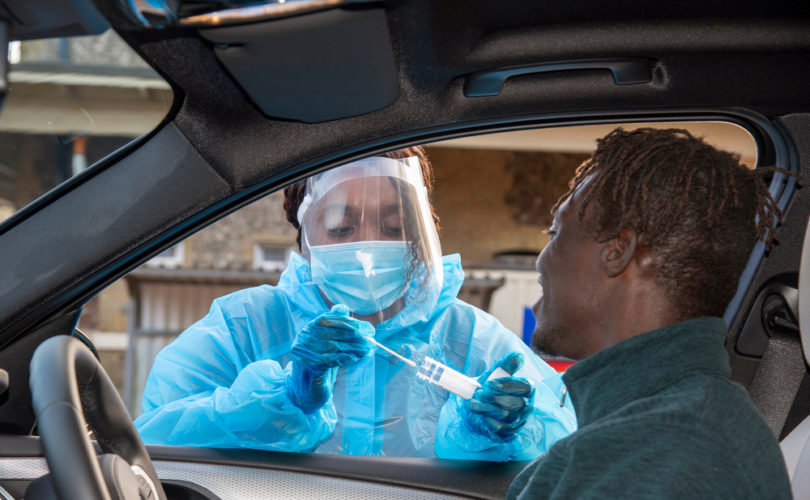 WESTMINSTER, U.K., June 29, 2021 (LifeSiteNews) — Official statistics released by the U.K. government indicate that in those aged over 50, most cases and deaths connected to the Delta variant of COVID-19, which is reportedly spreading wildly throughout the country, were among those who had been vaccinated against the coronavirus.

A report, entitled “SARS-CoV-2 variants of concern and variants under investigation in England,” was released June 25, 2021, by Public Health England as part of its ongoing series of briefings to the government. The paper focuses heavily on the Delta variant of COVID-19, which is described as the “dominant variant” in the U.K.

The tables of the report present details for the number of “positive cases” and deaths attributed to the Delta variant.

A further 7.8%, or 7,235 people tested positive for the virus despite having had both injections.

A high ratio of deaths, reportedly due to the virus, was also seen among those who had been vaccinated. Of the total 117 deaths reported, 50 of those (42.7%) were among people who had received two doses of the injection, while a total of 19 deaths (16.2%) were counted among those who reportedly died from the virus, at least 21 days after their first injection.

Over 61% of people aged over 50 had received either one dose 21 days prior, or had received 2 doses of the vaccine. In contrast, just 34.9% of people who were non-vaccinated people over 50 years of age, died.

Concern over the effects of the Delta variant were part of the advertised reason for the delay in lifting of lockdown restrictions in England, which were due to be lifted on June 21, and have been kept in place until July 19.

Announcing this delay, Prime Minister Boris Johnson urged people to accept the offer of a COVID-19 injection to protect against the variant. “We can give the NHS a few more crucial weeks to get those remaining jabs into the arms of those who need them,” he stated.

He claimed that the variant was “spreading faster than the third wave predicted” in the government documents, which planned the route out of lockdown.

Meanwhile, the experimental vaccine did not seem to prevent those who contracted the virus from having to seek out medical assistance. A total of 2,406 people sought emergency care (excluding cases with the same specimen and attendance dates, who did not necessarily attend hospital for COVID reasons).

— Article continues below Petition —
PETITION: Stand with Hungary for protecting children from LGBT propaganda
Show Petition Text
44269 have signed the petition.
Let's get to 45000!
Thank you for signing this petition!
Add your signature:
Show Petition Text

Despite the vaccines being touted by Johnson to offer protection against the virus and its variants, 1,571 people (65.3%) out of the 2,406 people who sought emergency aid were unvaccinated, meaning that a large minority (34.7%) who still required emergency care had received at least one injection of the vaccine.

The findings corroborate the words of former chief scientific adviser to the government Sir David King, who noted on June 7 that “400 new [COVID] cases a day are people who had the vaccine twice.”

Such breakthrough cases are becoming more common across the globe. In Clark County, Nevada, the local health district published in May 186 new cases of breakthrough infections of COVID, leading to 29 hospitalizations and 2 deaths.

In addition, 3,971 people in Massachusetts were reported to have tested positive for the virus, despite having been fully vaccinated.

A total of 973,435 adverse reactions were also reported, with events such as blindness, cardiac disorders, blood clotting, deafness, and paralysis amongst the serious side effects.

The figures are based on voluntary reporting to the U.K.’s Yellow Card scheme, and as such likely don’t present a full picture of the number of the deaths and reactions which follow the injection.