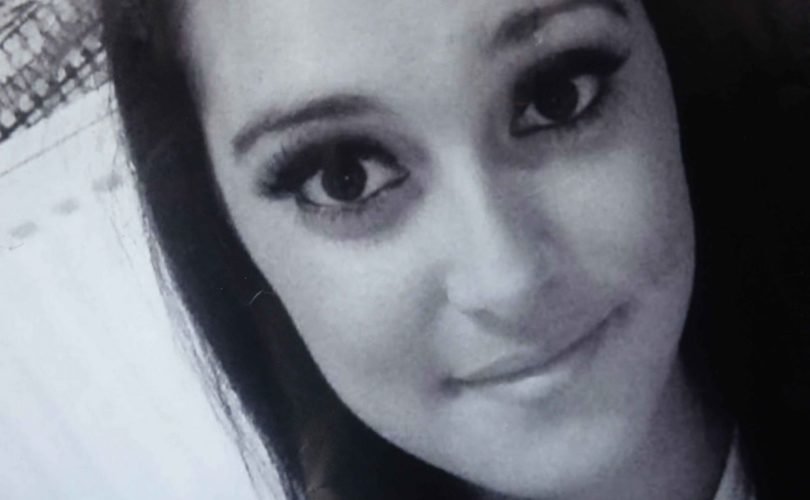 Fallan Kurek died from a blood clot on her lung, caused by the birth control pill, which she had been taking for only 25 days.

STAFFORDSHIRE, England, January 21, 2016 (LifeSiteNews) – A healthy twenty-one year-old teaching assistant died from prescription contraceptives, according to her doctor's word to her parents. Now the South Staffordshire Coroner's Court is holding an inquest into the death.

Fallan Kurek died last May from a blood clot on her lung, caused by the birth control pill, which she had been taking for only 25 days to regulate her menstrual cycle.

Fallan's family doctor prescribed the contraceptive Rigevidon on a trial basis to regulate her periods. After less than a month, Fallan began feeling breathless and having pain in her chest and lungs.

Fallan's father, Brian, took her to a hospital, where staff said there was nothing wrong with Fallan and released her. Four days later, Fallan was breathless again. “As she got half way down the stairs she collapsed,” Brian explained to the Daily Mail. “I got to the bottom of the stairs and she just went limp in my arms.”

She was rushed to Good Hope Hospital and put in intensive care, where scans showed that Fallan had a large blood clot in one lung, which was blocking blood flow to her heart.

The doctors inquired about the cause of the blood clot. “They asked me whether there was any heart problems in the family, or if Fallan had taken drugs,” Julia, Fallan's mother, explained. “Definitely not.”

Then the doctor asked about hormonal contraceptives. Julia answered, “Yes, is that relevant?” The doctor immediately said, “We know what it is!” and left.

Fallan died three days later, on May 14. Brian and Julia said doctors told them Fallan's pulmonary embolism was caused by the contraceptive pill she took for 25 days.

“I couldn't believe nobody had said the Pill could do this,” Julia said.

An inquest is looking into the exact cause of Fallan's death.

The standard Physicians Desk Reference warns of the dangers of hormonal birth control, stating that those who go on the pill are three times more likely to suffer venous thrombosis and have a 4- to 11-fold greater risk for pulmonary embolism.

Stephen Phelan of Human Life International told LifeSiteNews, “If the ongoing inquest determines that hormonal contraception led to the tragic death of Miss Kurek, it would sadly be far from the first case of a young woman being killed in the name of 'reproductive health.'”

Phelan told LifeSiteNews that the risks of the pill include not just dangerous blood clots, but various types of cancer (according to the World Health Organization), increased risk of HIV transmission (cf. Heffron, Lancet 2011), bone marrow loss, and other serious risks.

Phelan criticized the abortion industry for promoting hormonal contraceptives as “reproductive health.” He concluded, “The radical ideology of the sexual revolution still reigns even as its victims multiply, pushing young women into the use of dangerous drugs in order to maintain the lie that sex with many partners can be 'healthy.'”

“Any epidemiologist who is not bought by the sexual revolutionaries will tell you the commonsense truth that saving sex in a faithful marriage with one lifetime partner is the best way to avoid disease, and that natural methods of spacing pregnancies are by far the healthiest,” Phelan added. “That the Catholic Church has said this all along is to its credit, even as it is mocked by those who think that the death of young women is a small price to pay for sexual liberation.”

Brian and Julia, Fallan's parents, agreed: “Medics know the Pill can cause blood clots. We can't bring her back, all we can do is maybe save another life.”

The birth control pill is killing women, but no one’s warning them of the risk