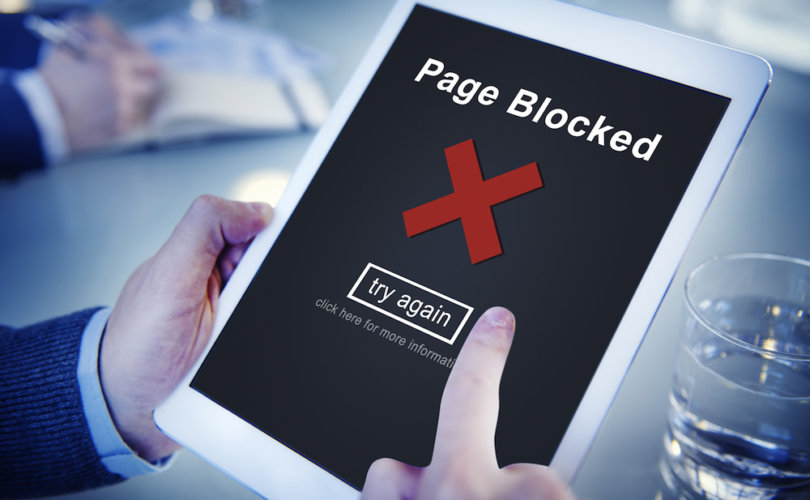 This may lead to massive online censorship, as social media companies could ban the content outright, since enforcing a ban on child accounts may not be feasible, as the editor-in-chief of The Spectator magazine, Fraser Nelson, argues.

“Britain is sleepwalking into censorship and we’re running out of time to stop it,” Nelson writes.

The OSB was originally proposed as a “world-leading” means of protecting children online by making Britain “the safest place in the world in which to use the internet.”

To achieve this goal, the bill proposes to levy new “duty of care” obligations upon “user-to-user services” and internet “search services” which will require tech firms like Google, Facebook, Twitter, and WhatsApp to police their platforms more closely for content considered “harmful,” regardless of it being legal.

— Article continues below Petition —
URGENT: Say No to the UK introducing a “right” to abortion
Show Petition Text
10639 have signed the petition.
Let's get to 12500!
Thank you for signing this petition!
Add your signature:
Show Petition Text

The firms will be responsible for updating their terms of use to reflect strict new laws around content publishing while ramping up efforts to remove and censor anything that comes close to breaking the proposed legislation.

The penalty for failing to uphold the as yet unclear standard could amount to fines of 10 percent of a company’s global revenue, or even having the platform banned completely, giving tech companies a strong incentive to be overly cautious in prohibiting content on their platforms.

The bill sets as its major aims the protection of children from being groomed by pedophiles online and thwarting conspiratorial and terror groups from convening over the internet and spreading propaganda.

While these look like noble aims, the draft bill has received widespread criticism, particularly within conservative circles, for seeming to “strangle free speech,” especially because it also purported to outlaw “content that is harmful to adults.”

Because of this criticism, the bill was altered and now only aims to protect children from “harmful” content and not adults. To achieve this, the OSB now requires social media firms to ban underaged children from their platforms by strengthening the age verification process.

According to the U.K.’s Telegraph, “[t]his could include the use of age verification technology that requires users to provide official identities authenticated by a third party to maintain security and privacy.”

Culture Secretary Michelle Donelan cites the case of Molly Russell, a 14-year-old girl who committed suicide in 2017 after “being bombarded with self-harm content” on social media, as an example of why the new legislation is necessary.

If social media companies fail to enforce the required age limits, they will face massive fines “of up to 10 per cent of their annual global turnover.” For Meta, formally known as Facebook, “that would currently be up to $12 billion,” Donelan stated.

According to Nelson, even if the “harmful but legal” guideline is intended only for people below the age of 18, it is likely that social media companies will censor the content for everyone.

“The problem, of course, is that cyberspace does not distinguish between children and adults. Nor can it, if anonymity and privacy are to be preserved,” Nelson wrote.

Because of this, social media firms will likely not risk a fine that could bankrupt their company but, to be on the safe side, would rather just censor “harmful but legal” material outright

“If they’re fined billions for getting it wrong, why take the risk?” Nelson asked. “Why not just treat everyone as a child, without telling them?”

“This takes us back to where we started: with Britain sleepwalking into a system far harsher than anything that the EU or the US is proposing,” Nelson warned.

Speech should be legal, or illegal. Creating a third category – “legal but harmful” – creates censorship

Since the decision regarding what content gets censored would likely be made by bots—interactive computer programs—and algorithms, the censorship problems arising due to the new bill could be even worse than anticipated.

“Bots make mistakes all the time – but no one knows because their decisions are never made public,” Nelson stated.

He named a recent example of his publication to illustrate the problem:

The Spectator recently broadcast an interview with a Harvard fellow about the Ukraine war. It was removed (by a TikTok bot) and categorized as lacking in “integrity and authenticity”. We appealed. We lost. No explanation.

“Another obvious reality now is that more children get news from TikTok than the BBC, more adults get their news from Facebook than any newspaper – and all of it is arranged by algorithms.”

“The Government has huge power to distort these algorithms, by threatening such insanely large fines […],” the British journalist warned.

“The best option would be to outlaw the genuine nasties, and refrain from censoring the written word – as successive governments have done for centuries,” Nelson concluded.

The revised version of the OSB returned to the House of Commons on December 5 for the 3rd reading.